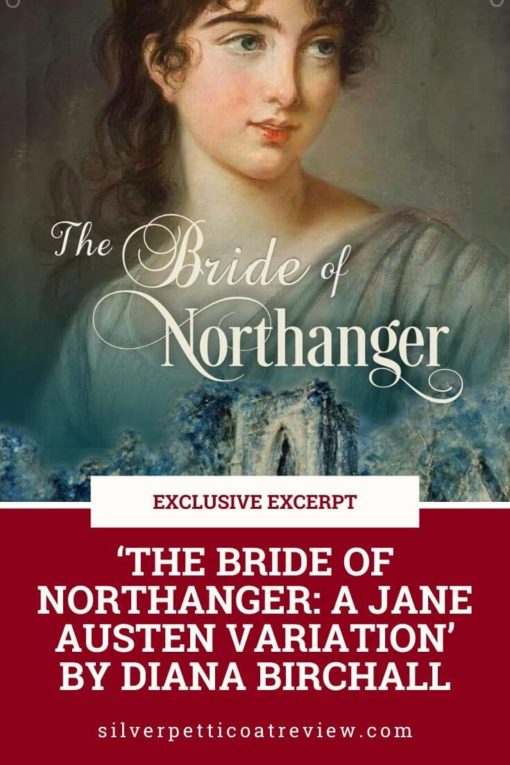 Author, Diana Birchall shares an exclusive excerpt with us from her new Jane Austen variation, The Bride of Northanger.

A romantic gothic mystery with Catherine Morland and the underrated Henry Tilney? Just yes! If you’re looking for a fun, Austenesque book, check out Diana Birchall’s The Bride of Northanger: A Jane Austen Variation and read our exclusive excerpt below.

A happier heroine than Catherine Morland does not exist in England, for she is about to marry her beloved, the handsome, witty Henry Tilney. The night before the wedding, Henry reluctantly tells Catherine and her horrified parents a secret he has dreaded to share – that there is a terrible curse on his family and their home, Northanger Abbey.

Henry is a clergyman, educated and rational, and after her year’s engagement Catherine is no longer the silly young girl who delighted in reading “horrid novels”; she has improved in both reading and rationality.

This sensible young couple cannot believe curses are real…until a murder at the Abbey triggers events as horrid and Gothic as Jane Austen ever parodied – events that shake the young Tilneys’ certainties, but never their love for each other…

EXCLUSIVE EXCERPT OF THE BRIDE OF NORTHANGER:

As Catherine crossed the dark lawn to return to the house, she saw the General, now with no package, but holding only a candle, leave the convent building and walk rapidly back toward his own quarters. Frightened lest he see her, she quickly hid in the shadows and watched him go.

Looking back toward the convent, she was truly startled, frightened more than ever before, by seeing a ray of light from the moon picking out and illuminating a wispy, ghostly lady in grey. The figure, which looked like a phantasm, glided a little way in the direction of the greenhouse, and when Wantage put out his candles and left the structure, Catherine dimly saw the Grey Lady glide back to the dark building.

Never had she run in such terror before, as she sped back to the house, ran up the broad staircase, and darted into her bedroom.

Henry was surprised. “Catherine! Are you all right? Has something frightened you? Was it one of the guests – the Frenchman?”

“No, no,” she cried, almost breathless. “It was nothing alive, nothing human! It was a ghost, Henry, I am almost sure. It was a wraith – a Grey Lady!”

Henry gave a tremendous start. “What! But Catherine, how could you know of the house legend, that Northanger Abbey is sometimes haunted by a Grey Lady at night? I don’t believe I have ever mentioned it to you. Of course it is perfectly preposterous, but how singular that the thing you saw – if you did see something – should be that.”

“I did see it, Henry,” she said emphatically. “Do you doubt me?”

“I think your father met with it too,” she confessed, “I saw him walk into the convent wall, carrying what looked like food, and then the Grey Lady glided out after him to watch his return.”

Henry looked disturbed. “I do not know what devilment my father is up to, any more than you,” he told her, “but I must confess that for all his talk about his liberality and the improvements he makes to the estate, he has often indulged in shocking cruelty toward his tenants. It may be that the lady you saw was a tenant, and he has some arrangement with her – something forced.”

“Oh, how terrible, Henry! Can we not help her?”

“I don’t know how we could. The estate manager, Claiborne, knows most about my father’s business, and it is to be hoped, would prevent him from doing anything positively – criminal.” He looked as if he hoped it was so, rather than believed it.

“We are safe enough here tonight,” Henry went on, “and it is best to leave my father to his own peculiar devices. I dare not think what he is doing; and you ought not, either. Come, let us go to bed, and be together. Tomorrow we will be gone from this unfortunate place, and I will write to the agent when we are back at Woodston, to be on the alert for any shameful abuses. Not that he can prevent them, but my father will not like to have his excesses exposed.”

Catherine shuddered. “I cannot wait to be at home, Henry,” she said fervently. Undressing quickly, she was soon in the warm bed, pressed closely against her husband for comfort. (Chapter 5, pages 47 – 54 )

Diana Birchall worked for many years at Warner Bros studios as a story analyst, reading novels to see if they would make movies. Reading manuscripts went side by side with a restorative and sanity-preserving life in Jane Austen studies and resulted in her writing Austenesque fiction both as homage and attempted investigation of the secrets of Jane Austen’s style.

She is the author of In Defense of Mrs. Elton, Mrs. Elton in America, Mrs. Darcy’s Dilemma, and the new The Bride of Northanger. She has written hundreds of Austenesque short stories and plays, as well as a biography of her novelist grandmother, and has lectured on her books and staged play readings at places as diverse as Hollywood, Brooklyn, Montreal, Chawton House Library, Alaska, and Yale. Visit Diana at her Austen Variations author page, follow her on Twitter, Facebook and Goodreads.

The Bride of Northanger: A Jane Austen Variation, by Diana Birchall

By The Silver Petticoat Review on October 30th, 2019