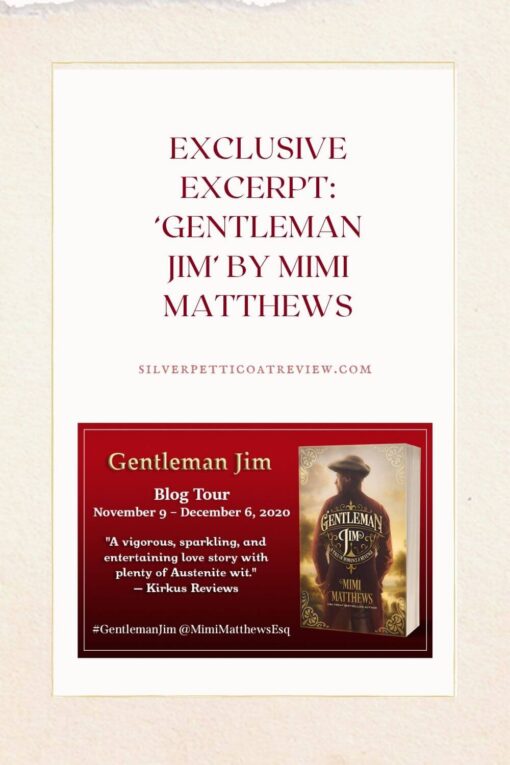 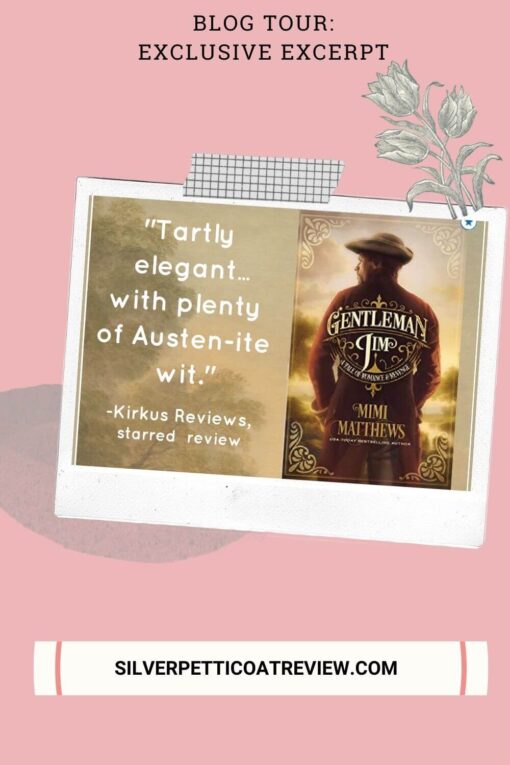 With starred reviews from Kirkus and The Library Journal, Gentleman Jim is a new Regency Romance you’ll want to check out – especially if you’re a fan of Mimi Matthew’s previous books or love clean historical romance novels and Austenesque fiction. So, find out more about Gentleman Jim and read the exclusive excerpt below.

Wealthy squire’s daughter Margaret Honeywell was always meant to marry her neighbor, Frederick Burton-Smythe, but it’s bastard-born Nicholas Seaton who has her heart. Raised alongside her on her father’s estate, Nick is the rumored son of notorious highwayman Gentleman Jim. When Fred frames him for theft, Nick escapes into the night, vowing to find his legendary sire. But Nick never returns. A decade later, he’s long been presumed dead.

After years spent on the continent, John Beresford, Viscount St. Clare has finally come home to England. Tall, blond, and dangerous, he’s on a mission to restore his family’s honor. If he can mete out a bit of revenge along the way, so much the better. But he hasn’t reckoned for Maggie Honeywell. She’s bold and beautiful–and entirely convinced he’s someone else.

As danger closes in, St. Clare is torn between love and vengeance. Will he sacrifice one to gain other? Or, with a little daring, will he find a way to have them both?

Fred fixed his gaze on Maggie. A muscle worked convulsively in his cheek. “I’ve never denied you anything, so long as you asked me in a polite and civil manner. Go to the dressmaker and the milliner, by all means, and have the bills sent to me. But not today. Today you’re to retire to bed. Tomorrow, if you have recovered your strength from the journey, you may go shopping. But you’re to take Bessie. I shall have a word with her before I go. She knows her duty.”

He took his leave of them, then. Jane summoned a footman to fetch his hat and cane and show him out. As the drawing room doors closed behind him, she muttered, “How generous you are. We are both so very much obliged to you.”

Maggie leaned back in her seat. As a girl, she’d been energized by arguments. Fueled by raised voices and heated words. Now such things only served to exhaust her. “What a colossal waste of time.”

“Not entirely.” Jane sat down across from her in Fred’s vacated chair. “He’s given you leave to purchase as many new clothes as you like. And if he thinks I mean to take you to Grafton House for a bargain, he’s much mistaken. We shall go to Madame Clothilde, that new French modiste in Bruton Street that everyone’s raving about. Très exclusif, apparently. She only dresses the richest and most beautiful ladies in town. You’ve lost a bit of your bloom, I know, but she’ll not turn you away.”

“How can I think of shopping? There’s still the duel to consider in the morning, and I haven’t the faintest idea what I…”  Maggie closed her eyes, rubbing her forehead again.

“To throw yourself between them?”

“Indeed not. But it occurs to me that, if I can’t reason with Fred, the only course of action left is to try and reason with the viscount.”

Jane stilled. “Lord St. Clare? But how can you? You haven’t even been introduced to him. And even if you had…he’s a single gentleman. You can’t simply pay him an afternoon call.”

“Of course not. By tomorrow afternoon, it will be too late. I must go today. Or tonight, rather, for I can’t be seen paying a call on him in broad daylight.”

“My dear, you cannot go at all. There’s your reputation to consider.”

“I suppose I shall have to go under cover of darkness,” Maggie said, thinking aloud. “When I’m least likely to be observed.”

“If you won’t consider your own reputation, you must at least consider mine. I’m your hostess and responsible for your—”

“I won’t ask you to accompany me, if that’s what you’re afraid of. And I won’t involve your servants, either. I can very well take a hackney to the viscount’s residence.” Maggie hoped that would be enough to protect Jane’s good name. “Unless…Gad, he doesn’t live in bachelor rooms in St. James’s Street, does he?”

“No. At least, I don’t think so. I’ve heard he’s staying at the Earl of Allendale’s residence. A big mausoleum of a place in Grosvenor Square.”

“But that’s not very far from here at all.”

“Yes, I daresay you might walk there,” Jane said dryly.

“I know you disapprove, but you must advise me. Is St. Clare as unreasonable as Fred, do you think?”

“I haven’t the slightest notion. We’ve never been introduced. Though I have seen him twice at the theater. He was sitting in a box with his grandfather. I must say, he didn’t look like a particularly amiable gentleman. On the other hand, I can’t conceive of anyone being as disagreeable as Fred.”

Maggie considered this. “Well, I suppose the worst thing that can happen is he’ll laugh in my face. Or refuse to admit me altogether. It’s very likely a fool’s errand, but if there’s a chance he might call off this stupid duel, I must make the effort to see him.”

“The worst thing that can happen…?” Jane was incredulous. “Margaret, no one knows the viscount well enough to judge his character. He’s been on the continent for ages. For all you know, he’s a rake and a libertine. A vile seducer. To go to his house alone—and at night, too—you’re practically offering yourself to him on a silver platter!”

“I shan’t go alone,” Maggie said. “I shall take Bessie with me.”

USA Today bestselling author Mimi Matthews writes both historical nonfiction and award-winning proper Victorian romances. Her novels have received starred reviews in Library Journal, Publishers Weekly, and Kirkus, and her articles have been featured on the Victorian Web, the Journal of Victorian Culture, and in syndication at BUST Magazine. In her other life, Mimi is an attorney. She resides in California with her family, which includes a retired Andalusian dressage horse, a Sheltie, and two Siamese cats. Her next romance, The Siren of Sussex, will be out in 2022 from Berkley/Penguin Random House.

By The Silver Petticoat Review on November 11th, 2020