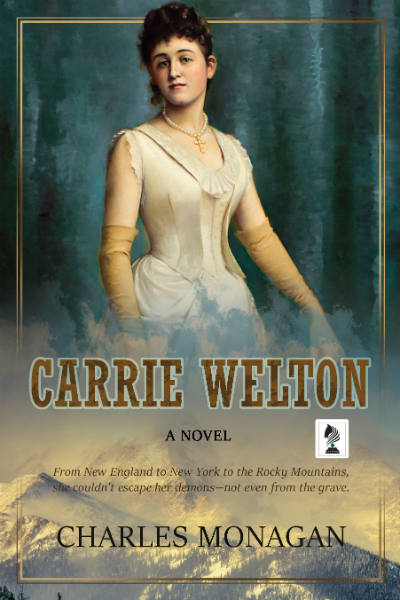 (I received a free copy of Carrie Welton from the author Charles Monagan to write an honest review on The Silver Petticoat Review. All opinions are my own.)

Carrie Welton is a historical fiction novel that explores the life of a real woman who lived in the 19th century. Throughout her short life, she was a huge animal advocate (donating a great portion of her money to the ASPCA), an artist who studied with the Hudson River School painters, an adventurer, and more. While the novel is fictional, author Charles Monagan weaves in real events with real people in a way that makes the story feel true – even though it’s really more of a fill in the blank of Carrie’s life rather than historical fact.

The story begins with a distressed 18-year-old Carrie (due to her abusive father), as told from the perspective of Frederick Kingsbury, a local family man, in the rarely used first person omniscient narrative. Frederick and his wife quickly take an interest in Carrie, and from there we follow her fascinating but tragic life. And all of the story structures around a painting of her that now hangs in the Mattatuck Museum in her hometown of Waterbury, Connecticut.

RELATED YA Book Review: The Revelation of Louisa May – Where Historical Fiction and Romance Collide

Carrie Welton is this person from history you’ve likely never heard of but after reading the novel will want to know her – all the while knowing you never really will be able to. Perhaps that’s the beauty of the book and it’s strange narration techniques. Just as you feel you’re beginning to understand Carrie, the writer switches perspective and again puts her at a safe distance from the audience. As if Carrie will never fully be able to escape the painting that leaves her “audience” captivated. She’s a mysterious portrait. One I’m glad I “saw.”

Besides Carrie, the other characters also intrigue thanks to the writing talent of Monagan. I was especially interested, however, in the real people that made cameo like appearances in the story as they crossed paths with Carrie. Don’t be surprised if you find yourself googling some of the mesmerizing people Carrie meets! A few of which could have novels or movies about them as well.

On top of the characterization and unusual narration, Monagan’s writing ability in general impresses. He knows how to weave a good story and has a talent for the historical fiction genre. In all, Carrie Welton is a fantastic novel and one that deserves to be read by a larger audience. If only to immortalize this amazing woman.

While Carrie Welton begins a bit slow, the story and characterization draw you in. Not to mention Charles Monagan’s talent as a writer. He embodies an old-fashioned quality not often found in books today.

Carrie Welton would make a wonderful adaptation whether as a period film with a visionary director and a decent budget or as a TV miniseries. With a brilliant, enigmatic female lead, this is the type of role many talented actresses would jump at the chance to play. And there is so much story here to explore. From the adventures in 19th century NYC (with real people from history in the art world she crossed paths with) to Carrie’s time with Henry Bergh, the founder of the ASPCA, and even to her tragic relationship with her father. No doubt, this would be a compelling period drama with a female character who will leave the audience entranced.

Content Note: There is a brief sex scene though it is not overly explicit. While also not completely implied either.

You can buy the book on Amazon. You can also find out more about the author at his website HERE.