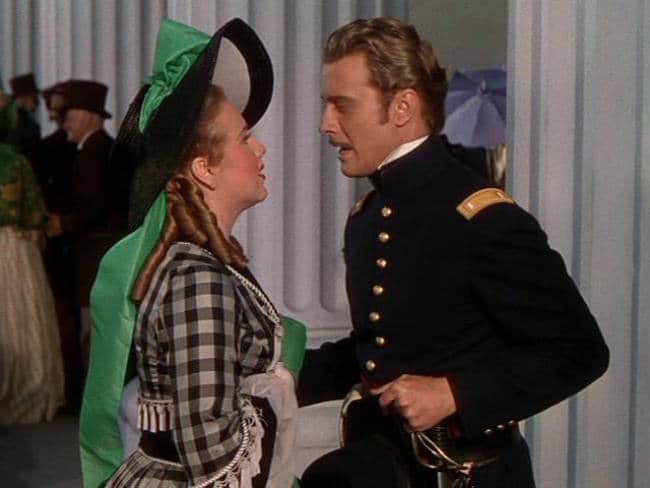 Universal had another role for their silver screen darling, Deanna Durbin with Can’t Help Singing, a romantic period film that is somehow like Cinderella’s slipper: a perfect fit. Though this one is a departure from her usual film roles (because it’s set during the California Gold Rush), Can’t Help Singing still suits what the studio wanted to bring to the screen with their songbird, Durbin.

In Can’t Help Singing, she plays Caroline Frost, an opinionated senator’s daughter who happens to be in love with a soldier. Her Father (Ray Collins) does everything he can to keep them apart including having his regiment sent west, but Caroline won’t be swayed. Certain Robert is the one, Caroline defies her father. Putting on an act, she manipulates him, and instead of taking a trip to the city (as he thought), she heads West to follow Robert.

On her journey (which includes being swindled out of her money), Caroline clashes with a cowboy, Johnny (Robert Paige). Readying to travel to California, Johnny isn’t without his own troubles; he’s a gambler, who cannot seem to stay away from the cards. 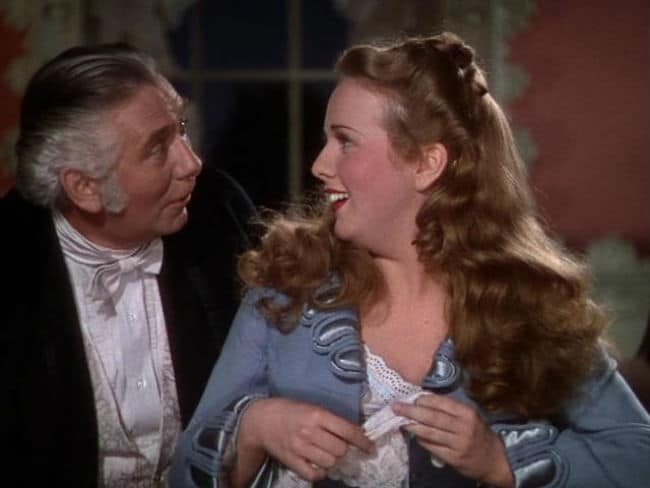 The only Technicolor Durbin starred in, this movie has more personality than usual because of its vibrant color. We have the chance to fully appreciate the pretty as a picture costuming (even if Caroline’s dress is a little overdressed for life on the prairie). Deanna’s playful sass “grew up” a lot as she, in fact, also grew up. This came a long way from the roles she played as a pesky young girl tagging along with older sisters or a downtrodden Cinderella. In Can’t Help Singing, Caroline’s father is the recipient of her clever ploys, which makes the scene of her playacting (in order to convince her father she’s in love with Robert) all the funnier.

Fun bit of trivia, Ray Collins (Senator Front) might look familiar to black-and-white entertainment buffs because he played Lt. Tragg, the thorn in Perry Mason’s side in Perry Mason.

Nominated for two Academy Awards, and at the time, one of Universal’s largest budgets, this musical extravaganza isn’t a difficult story to enjoy. Because of the plot, there are plenty of comedic opportunities for the script to play with. For example, Johnny and Caroline have to bluff their way through convincing someone of her wedded bliss to a faux husband. Then, later, to protect her identity, his abuse. Props should be given to the script for playing the comedic ending to its best potential. Because of the humor, it’s best not to take this one too seriously. Just enjoy the film with a smile. 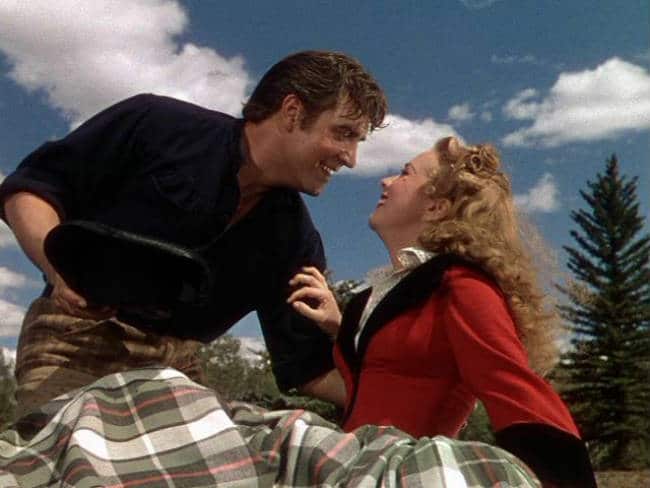 To close, I’ll say this, the songs and whimsical musical numbers make Can’t Help Singing all the more charming. The colors and sense of romanticism perfectly play to this “vintage” era of filmmaking. Those who enjoy classic films with a wholesome story are sure to fall in love with this charmer. And of course, you just might find yourself singing right along with the catchy tunes.

Have you seen Can’t Help Singing? What are your thoughts on this musical classic?

Check out more of our Vintage Reviews. Read our reviews of Something in the Wind starring Deanna During or the classic musical Oklahoma!

Our romance-themed entertainment site is on a mission to help you find the best period dramas, romance movies, TV shows, and books. Other topics include Jane Austen, Classic Hollywood, TV Couples, Fairy Tales, Romantic Living, Romanticism, and more. We’re damsels not in distress fighting for the all-new optimistic Romantic Revolution. Join us and subscribe. For more information, see our About, Old-Fashioned Romance 101, Modern Romanticism 101, and Romantic Living 101.
Pin this article to read later! And make sure to follow us on Pinterest.
By Rissi JC on May 6th, 2016