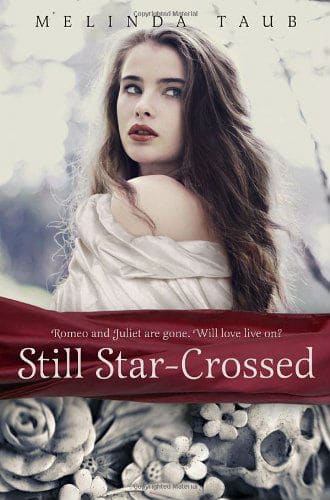 While I can quote many a line from Shakespeare’s Romeo and Juliet thanks to my high school experience, it’s actually my least favourite Shakespearean play. In truth, when compared to the complexities of Othello or the genius (in my humble opinion) of Hamlet, Romeo and Juliet just left me feeling like the play simply didn’t scratch beneath the surface enough. “Too shallow”, I would argue when confronted with the usual ‘but’ pivoting around the romance, the sacrifice and the argument about the course of true love.

Perhaps it’s because I love fanfiction, but I always relish an epilogue more than a prequel. Epilogues are to fanfiction what peanut butter is to jelly. They belong together. And personally, I don’t enjoy looking back when I already know how things will end. I want to look ahead. I want to experience more of the what next. So despite numerous misgivings, I was nevertheless excited to read Still Star-Crossed, a sequel exploring the what happens next after the original play.

In fair Verona, enemies still walk the streets.
Two news hearts. Same two families.
The fight to the altar is about to happen.
All. Over. Again.

Still Star-Crossed begins after the deaths of Shakespeare’s doomed lovers and in so doing, it opens up a new, exciting and refreshingly playful romance that’s a delightful and delicious read. It’s written by Melinda Taub, who tackles the unenviable task of following in the very big shoes of William Shakespeare.

Still Star-Crossed picks up pretty much where Romeo and Juliet ends. The young lovers have been buried but the tragedy of their demise has done nothing to soothe the festering hatred between the Montague’s and the Capulet’s. Clearly, death and destruction are the soul food of these two families. However, Escalus, Prince of Verona, realises that if the feud is left unattended, he might lose control of his city. “There is another reason I have thought of this match,” Escalus announces. “So many are dead, but you – you, Benvolio, you, Rosaline – you live. You survived. This whirlwind of death that decimated your families and even taken Paris and Mercutio, mine own cousins – it has passed you by, left you unscathed.” And so taking a leaf from Romeo and Juliet’s playbook, he orders the marriage between a Montague and a Capulet.

Rosaline hates the idea. Benvolio balks too, especially when he realises she’s the Rosaline Romeo had been in love with. However, it becomes pretty clear that there are outside forces that want to ensure that the Montague’s and the Capulet’s continue their endless feud. And so in an attempt to waylay their impending nuptials, Rosaline and Benvolio set out to solve the mystery. And in so doing, are forced to share space and time with each other.

The Course Of True Love Never Did Run Smooth

Rosaline Capulet has a blink and you’ll-miss-it appearance in the original play. She is the young woman Romeo believes himself in love with at the beginning of the book. In Still Star-Crossed, Rosaline goes from a barely-there character to the sassy heroine of her own story. As Juliet’s cousin, Prince Escalus chooses Rosaline as the would-be bride for Romeo’s BF, Benvolio Montague.

Rosaline couldn’t breathe. His pleading gaze was so desperate that she couldn’t look away. This must be the selfsame balcony where Juliet had trysted with Benvolio’s cousin. Had Romeo’s eyes ever yearned as Benvolio’s did now?

Benvolio, like Rosaline, is the co-star of this novel in an expanded role. He is funny, sensitive and valiant with a strong moral compass. In short, Rosaline and Benvolio are incredibly fun characters that spark off each other like a cacophony of kaleidoscopic strobe lights. They bicker, they trade epic barbs and pretend to fall in love while actually really falling in love. Their dynamic is the pot of gold at the end of the rainbow. They are both strong-willed, determined and independent within the confines of the roles they are forced to play. It’s caramel poured all over popcorn with a delicious crunch.

All The World’s A Stage

With Still Star-Crossed, Melinda Taub does a good job. I pretty much swallowed it whole and read it in 1.5 sittings. Despite the throwback to Shakespeare with her style and dialogue, the book is easily digestible and very easy to read. The characters are all familiar but her writing renders them slightly more accessible. Five minutes after reading their first few scenes together, I was genuinely way more interested in Rosaline and Benvolio than I ever was in Romeo or Juliet. I blame both Shonda Rhimes and Melinda Taub in tandem.

RELATED: The Princess and the Hound Book Review – A Fairy Tale Twist

Still Star-Crossed isn’t groundbreaking literature. But it’s unabashedly romantic and charming. The expanded plot is exciting, allowing the characters to develop and grow while working together to solve a mystery. Along with the romance, the book is also surprisingly funny. Still Star-Crossed is a delightful romantic comedy where Romeo and Juliet was a darker romantic tragedy.

Still Star-Crossed has been adapted for television by ABC. The reigning queen of drama, Shonda Rhimes has brought the novel to the small screen with a diverse cast of interesting characters. Wade Briggs and Lashana Lynch are Benvolio and Rosaline respectively. Anthony Steward Head, Grant Bowler, Zuleikha Robinson and Torrance Coombs also star.

Content Note: The book is safe for all ages.

Have you read Still Star-Crossed? What did you think? Comment below and let me know!

Our romance-themed entertainment site is on a mission to help you find the best period dramas, romance movies, TV shows, and books. Other topics include Jane Austen, Classic Hollywood, TV Couples, Fairy Tales, Romantic Living, Romanticism, and more. We’re damsels not in distress fighting for the all-new optimistic Romantic Revolution. Join us and subscribe. For more information, see our About, Old-Fashioned Romance 101, Modern Romanticism 101, and Romantic Living 101.
Pin this article to read later! And make sure to follow us on Pinterest.
By Naazneen Samsodien on July 7th, 2017