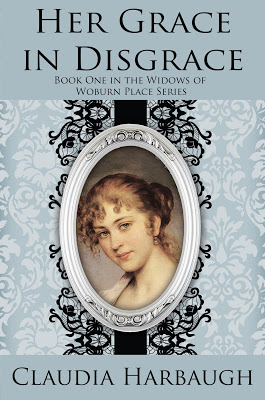 (I received a free copy of Her Grace in Disgrace to write an honest review on The Silver Petticoat Review. I was not financially compensated for this post and all opinions are my own.)

Book: Her Grace in Disgrace

“Reginald Aiken, Duke of Warwick is dead and his young widow is not grieving…until the will is read. Isobel Kennilworth Aiken, Duchess of Warwick spent 6 years of her young life in a loveless marriage. Now, at the age of 24, Isobel is a widow. As Isobel awaits the reading of her late husband’s last will and testament, she feels no grief, but in fact is quite hopeful. She is eager to start her life anew. But, as the droning of the solicitor’s voice washes over her detailing the bequests to various servants and family members, a shock awaits her. The “other woman” was not his mistress, but his lawfully wedded wife and together they had a son. Six year old Reggie is now the Duke of Warwick, displacing Reginald’s brother Charles.

There is a collective gasp as the revelation is made that instantly cuts off Isobel and Charles and dashes their hopes for the future. Isobel must indeed start again, not as a titled, influential and wealthy widow, but as plain Miss Kennilworth, tainted by scandal, something to be avoided at all costs in Regency England. Can she get past the disgrace and humiliation she has endured and fight her way back into society? Will she find love again with her childhood sweetheart, Andrew Stafford, former vicar, now Lord Saybrooke? Or perhaps she will rekindle the romance with Jeremy Ingles, Lord Westcott, who had caught her fancy at her come out six years earlier, but had not been ready to be leg shackled.

But before Isobel can find true love, she must come to grips with her past mistakes and the people she has hurt along the way. She must discover who she is without the title of duchess to her name.”

Scandals, old-fashioned classy romance, and striking characters that stay with you, all make for an impressive read. Author Claudia Harbaugh’s Regency romance, Her Grace in Disgrace, takes us into the heart of England at the time when women did not have many choices. How could any respectable woman marry for love when there were so many family and societal demands? The rules of society scream out crystal clear in this tale of heartbreak and rekindled romance. The depiction of class and the barriers between those accepted by society and those who are not is where the book shines the most, easily opening a gateway into a world quite different from modern day.

Scandals, old-fashioned classy romance, and striking characters that stay with you, all make for an impressive read.

When Isobel Kennilworth discovers she’s not the lawful wife of the Duke, and therefore not the Duchess of Warwick, chaos ensues and much fun is to be had (and despair too). However, Isobel Kennilworth is not your average, likely heroine. For those looking for sweet characters without blame, this book will not be for you. Isobel is selfish, cold, stubborn, and has made ruthless choices in life (i.e. forcing the Duke to ‘marry’ her by creating a scandalous situation and ruining another woman’s reputation to achieve this same marriage).

Hate her. Love her. Whatever the case, Isobel makes for a bold choice as a protagonist, one that needs redemption. It’s these imperfections in Isobel that makes her stand out from the crowd of other Regency heroines. Her flaws also urge me to root for her to change and to keep reading to find out if she can or even will choose to do so, once again emphasizing that Harbaugh’s characters are rich and fully developed to be true to real people with real problems. None of us are saints behind closed doors. Isobel’s flirting with temptation, devious plotting, and bursts of temper (like throwing teacups at her old flame Lord Saybrooke) were also a joy to read.

The romance between Isobel and Andrew definitely was another highlight of the book, some parts echoing Austen’s Emma (thanks to all of Isobel’s plotting and Andrew’s preachy speeches). Getting inside both of their heads made it easy to root for their happy ending (you’ll have to read the book to find out if they do). At the same time, however, their inner thoughts and desires also made it difficult to root for them because their thoughts reveal both of their flaws to an even deeper degree. While Isobel is cold and suffering the consequences of her past choices, Andrew can be judgmental and stubborn in his own way. Nevertheless, their romance will pull at the heartstrings and entice you to discover if these two childhood sweethearts can come together, despite her poor reputation.

The supporting characters also play an important role in Her Grace in Disgrace. Because Isobel is shunned by ‘good’ society, I was intrigued by the characters that cared more about friendship than what others thought of them. Joanna, with her fiery spirit and disregard for society’s rules, was a particular favorite. Sometimes she reminded me of Anne Shirley (with her kindred spirit dialogue); while other times Jo from Little Women because she was adamantly against all her romantic suitors (she even puts on a play at one point echoing Mansfield Park in all its naughty glory). A part of me wouldn’t have minded an entire book just about Joanna. Charles is the other secondary character I enjoyed. Every book needs a rogue (in my personal opinion) and Charles suited just fine as a man with a gambling problem but a good heart.

Nevertheless, Her Grace in Disgrace is not without some snags. From the outset, this book was difficult to jump into because of the confusing narration. Who was the actual narrator? The point of view switches from character to character and from paragraph to paragraph at first. This particular creative choice did not flow naturally. Thankfully, once you get through the first couple of chapters, the jumping narration tones down.  The novel could have also been improved with just one or two more rewrites (with a few editorial errors to fix along the way).

Still, overall, Her Grace in Disgrace is an entertaining read, one that uplifts your spirit by the end. Themes of friendship (including female ones), forgiveness, and maybe even a little grace, all come together as a lovely whole. This is the type of novel that leaves you with a smile, along with maybe a small desire to do some good in your own life.

This would work best as a Made for TV film similar to The Inheritance adaptation based on one of Louisa May Alcott’s lesser-known novels. In fact, this would work rather nicely for an uplifting Hallmark Film.

Our romance-themed entertainment site is on a mission to help you find the best period dramas, romance movies, TV shows, and books. Other topics include Jane Austen, Classic Hollywood, TV Couples, Fairy Tales, Romantic Living, Romanticism, and more. We’re damsels not in distress fighting for the all-new optimistic Romantic Revolution. Join us and subscribe. For more information, see our About, Old-Fashioned Romance 101, Modern Romanticism 101, and Romantic Living 101.
Pin this article to read later! And make sure to follow us on Pinterest.
By Autumn Topping on August 30th, 2013