Today, we’re excited to have author Rob Thier (known to his fans as “Sir Rob”) of ‘Storm and Silence’ and ‘The Robber Knight Series’ here to discuss his background and latest book!

Thank you for agreeing to do this interview. Can you tell us a little bit about yourself and how you came to be a writer?

I must admit I started writing so early in life that I don’t really remember when or how. Maybe when I was nine or ten years old? But it didn’t develop into anything serious until I discovered online writing platforms like Wattpad and started studying at an English university a few years ago. Unlike my failed writing attempts in my native language, German, here for the first time I had an opportunity to share my writing with a big audience, ask feedback and gather experience. And my university studies gave me the practice I needed to perfect my grasp on the English language. From there it was just a small step to deciding that I wanted to be a professional writer, and that has been my dream ever since.

How does being a historian affect the way you write stories?

It has made me a little bit of a stickler for accuracy. I do a lot of research for my stories. Even when it is a contemporary story, I want to make sure that the characters behave in a realistic way. Even if I were to write a fantasy story, I would research various mythologies and create a world that is in some way related to real human ideas and conceptions out there in the world. It makes for a very interesting writing process because during the research you always discover things that you never knew before.

Congratulations on your latest story, Storm and Silence. For those who aren’t familiar, can you explain what it’s about?

The story follows the adventures of 19-year-old feminist Lilly and her budding romance with the powerful and ruthless business mogul Rikkard Ambrose. A firm believer in the equality of men and women, Lilly is forced to dress up as a man in order to work for Mr. Ambrose and achieve her independence. The two of them butt heads all the time, but when an important document is stolen from Mr. Ambrose’s safe, and he has fought a battle of wits and intrigue with his arch-enemy Lord Dalgliesh, she stands by him through thick and thin, and the two of them grow closer, until their relationship finally heats up. 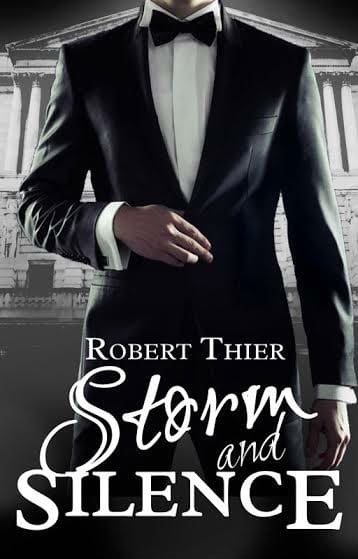 Can you share some insight behind the story and your main characters Lilly and Mr. Ambrose?

Originally, the story grew out of my study of 19th-century suffragism and Chartism. I read about a chartist demonstration where several dozen people were beaten to death by policeman for wanting the vote, and I thought – if that’s what it was like for men, how much worse must it have been for the women, who, back then, had no chance to learn how to defend themselves?

Lilly developed as a mix of my favorite female fictional characters and some leading early-day feminists and suffragists. She is strong, quirky, determined, and will let nothing and no one stand in the way of her dreams. I needed a male character who would be strong enough to stand up to her and clash with her occasionally. A Victorian industrialist-financier type, utterly ruthless, chauvinistic and stingy, seemed the ideal contrast to her, and an interesting character to have as a ‘hero.’ Thus, Lilly and Mr. Ambrose were developed.

Something I loved about Storm and Silence was the connection to the suffragette movement. What specifically drew you to write about this particular time period?

It was the first period in which a feminist female character could, with historical accuracy, be portrayed as fighting for her rights. True, there were exceptional women before then who ventured into the male world, such as Joan of Arc, but mostly women distinguished themselves in areas that were traditionally associated with their stereotypical gender role. The thing about the Victorian era that attracted me was that during this period, women began for the first time to speak up against the injustices in their lives in greater numbers. It was an era of great change, and that fascinated me.

What are some of the challenges you faced finishing the book?

Getting Lilly and Ambrose to relent, and to grow closer. They can be quite stubborn characters in that regard. It also wasn’t easy to give an accurate description of some of the parts of 19th century London. It was rather difficult to do a subject on English history here from Germany. But it was well worth it in the end.

Can you tell us a little about some of the other books you’ve written?

The only other book of mine currently published is the first volume of The Robber Knight Series, following the adventures of the mysterious, bewitched knight Sir Reuben and his romance with Lady Ayla von Luntberg. Sir Reuben is a fallen knight, the medieval version of a bad boy who has renounced all notions of honor and makes his living by robbing people. His motto: “I steal from the rich to give to myself.” But when Lady Ayla saves his life, he feels bound to help her defend her lands against the approaching army of the Margrave von Falkenstein, and the two of them become entangled in a dangerous romance.

I do have other stories as drafts on Wattpad.com, the online writing platform where I first started making my writing public, and I’m planning to publish more of them as paperbacks and ebooks soon, including the sequel to Storm and Silence, which is currently in the works.

Are there any writers who came before that influence your own writing style?

Yes, definitely. The top four writers who influenced me probably are Terry Pratchett, Meg Cabot, Roald Dahl and Jane Austen. A very varied collection – they write (or wrote) everything from humorous fantasy over romance to children’s novels. But what they all have in common is a good dose of humor which I have tried to incorporate into my own works.

What writing project are you working on next?

Of course, there is the Storm and Silence sequel, In the Eye of the Storm. But apart from that, I am working on developing ideas for a new project, something that will give me a chance to explore my penchant for dark humor. If you enjoyed the humor in Storm and Silence, you definitely have things to look forward to!

What’s the best way for readers to follow you and your projects?

I also post drafts of my stories on Wattpad and Radish Fiction. Anyone who wants to be the first to get their hands on new chapters can do so online with just a few clicks. Here’s my Wattpad profile: https://www.wattpad.com/user/RobThier

And here’s the download page for the Radish Fiction App, which gets somewhat earlier updates: https://radishfiction.com/

You can read our other interviews HERE.

Our romance-themed entertainment site is on a mission to help you find the best period dramas, romance movies, TV shows, and books. Other topics include Jane Austen, Classic Hollywood, TV Couples, Fairy Tales, Romantic Living, Romanticism, and more. We’re damsels not in distress fighting for the all-new optimistic Romantic Revolution. Join us and subscribe. For more information, see our About, Old-Fashioned Romance 101, Modern Romanticism 101, and Romantic Living 101.
Pin this article to read later! And make sure to follow us on Pinterest.
By Amber Topping on April 1st, 2016