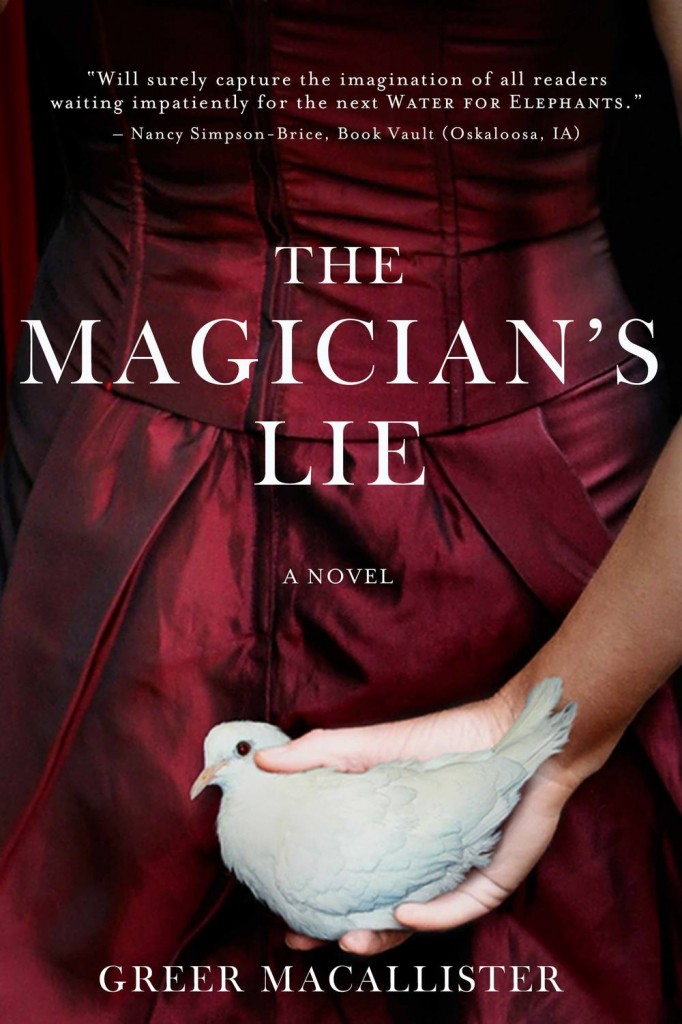 Suspense, magic, romance, mystery and memorable characters are just a few of the elements found in Greer Macallister’s masterful debut novel The Magician’s Lie. With each twist and turn, I found myself more drawn into the world of the Amazing Arden. The story is both an entertaining spectacle and a literary feat worth reading.

The Magician’s Lie tells the story of Ada Bates, a young woman with a colorful history (almost unbelievable in the many tragic turns of events) who becomes the Amazing Arden, the most famous illusionist in the world. Now in her mid-20s in 1905 she is caught under suspicion for murdering her husband after one of her shows. In the course of one night, Arden tells her entire life story to Officer Holt who has the ability to let her go or keep her imprisoned. She claims innocence, but can he believe her? With someone capable of such great illusions, how can he believe her incredible story?

What then unfolds is the interweaving story (the past and present day) of Arden. She tells her tragic story to Officer Holt about the abuse she faced from her cousin Ray, being on the run, eventually turning her dance skills into becoming a great illusionist (the real life figure Adelaide Hermann enters the story and becomes her mentor), all the way up to the night that led to her husband’s murder.

Without giving too much away, I can say that Arden’s story captivates from beginning to end with conflict, romance, and surprising twists.

Arden’s story captivates from beginning to end with conflict, romance and surprising twists.

The best part of the book, however, is the characters. The level of detail that went into describing Arden and her history is fantastic. She is a three-dimensional female character with both courage as well as deeply seated flaws. In some ways, she is very feeling, in other ways quite cold from her inability to trust (and understandably so based on her experiences). She is a fascinating female character worthy to be a heroine in a novel.

Another character I really enjoyed reading was the historical figure, Adelaide Hermann. Macallister truly captures the essence of this iconic female illusionist; the only downside to her character was that she wasn’t in the story more. The other two characters that captured my attention were the psychotic Ray (who is basically a mentally deranged sadist obsessed with Arden) and Clyde, Arden’s love interest. I can’t say too much about either without giving away important plot twists. But both characters were intriguing and interesting to read.

Another aspect of The Magician’s Lie that makes it work is the level of detail given to historical research. Macallister understood the time periods she was writing and interweaved historical events and figures seamlessly. I was especially intrigued by the addition of the famous Iroquois Theater Fire of 1903. It brings you right into the tragic events that killed hundreds of people trapped inside the theater.

That all said, this is not your typical historical novel due to the addition of fantasy magic. Arden is a magician, but she also claims to have a magical ability. Real magic is weaved into the story giving it a fun, fantastical feel on top of the historical fiction and dramatic story.

In all, while I found Officer Holt could have been a tad more layered as a character, The Magician’s Lie is a wonderful book and an addicting page turner. Even though the copy I read is an uncorrected advanced copy, I can’t really see much to improve on. No doubt author Greer Macallister is an author to keep an eye on.

The Magician’s Lie would make a wonderful big-budget feature film. Think Water for Elephants meets Titanic meets The Illusionist. With a clear narrative interweaved into real historical events and figures, memorable characters, some fantastical magic, an engaging romance as well as a villain that chills to the bone, this story would make a perfect and incredibly entertaining adaptation. In fact, this would be a great female-driven vehicle for an actress looking for a memorable character to take on. If this is ever adapted into a feature, I’ll be the first one in line!