A Quiet Passion is not an ordinary period drama. Instead, this biopic of Emily Dickinson feels like time travel. The film is so real, the dialogue so jarringly foreign at first in its authenticity, and the performances so nuanced and emotional, that by the end, you will be completely immersed in the life of this reclusive American poet.

A Quiet Passion tells Emily Dickinson’s story from birth to death. Emily’s life isn’t filled with interesting event after event. Rather, the focus on Emily’s intellect, witty conversations, and emotional turmoil will leave you entranced with its intellectual subtlety. That is if you can adjust to the poetic style of filmmaking. (The dialogue can be really, really funny before the writing turns rather depressive.) 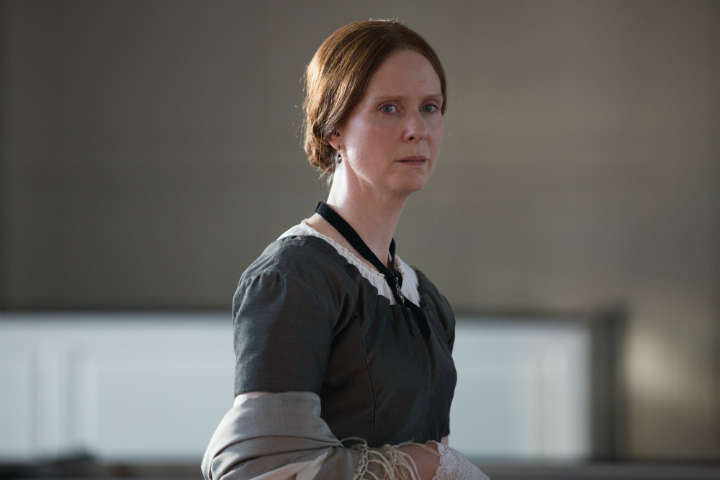 In the film, Emily’s a 19th-century unmarried woman with limited opportunities. Not to mention, health issues that keep her bedridden much of her life. However, Emily wasn’t this quiet loner. Inside her home, she was outspoken, flirtatious, and temperamental. This was a woman with several sides leaving the door wide open for Cynthia Nixon to give her best ever performance as an actress.

RELATED | TO WALK INVISIBLE: THE BRONTË SISTERS – A BLEAK YET WONDERFUL BIOPIC

Emily could be bitter, flirty, witty, emotional, and anxious. But most importantly, she was a brilliant woman who didn’t know where to direct all that intellect in a time when women were constrained by society. Incidentally, much of the film follows Emily’s interactions and opinionated conversations with her family and friends. At the same time, Emily seeks an outlet for her writing that frustratingly goes nowhere.

During her lifetime, Emily’s writing is unfortunately ignored and goes unnoticed. And as she ages in the film, the bitterness to her frustration increases. As her illnesses intensify as well, Emily’s sister played by the always amazing Jennifer Ehle (Pride and Prejudice) takes care of her in emotional scenes that have you spellbound by their every word. These two amazing actresses working off one another is magnificent to behold.

Meanwhile, time emerges as a theme in this slow-moving film, emphasizing Emily’s transition into reclusiveness. The special effects from young Emily’s daguerreotype into Cynthia Nixon’s face is astonishing and unbelievably beautiful because you experience time passing. And it’s sad. Similar to Terence Davies’ work in The House of Mirth, he pulls you into the story only to hit you in the gut with so much nuanced emotion, that you leave his films pondering life. You will definitely do that here as well.

Overall, A Quiet Passion is an underrated masterpiece that deserved more recognition, particularly for Cynthia Nixon’s acting and Terence Davies’ exquisite screenplay. In a film about a poet, I love that the beauty of language plays such an important role in the script. Like Emily Dickinson’s poems, there’s a rhythm and a beat to the heart of the screenplay that transforms what could have been a good period drama into something transcendent. It’s a thing of beauty.

If you love movies with depth, literary language, beautiful costumes, and masterful performances, I highly recommend A Quiet Passion. It’s a quiet masterpiece that like Emily Dickinson has been largely ignored. Hopefully, over time, the film will continue to find new audiences that can appreciate true artistry.

Where To Watch: Buy on DVD/Blu-Ray or stream on Amazon Prime. You can also rent from YouTube, iTunes, Vudu, and Google Play.