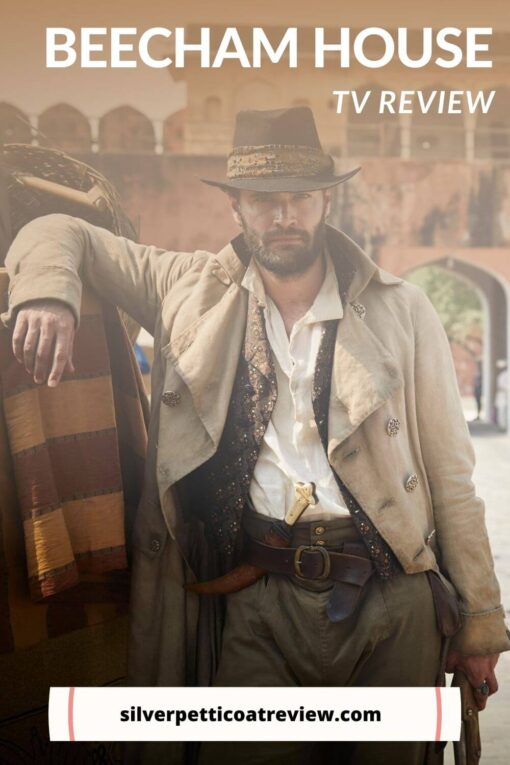 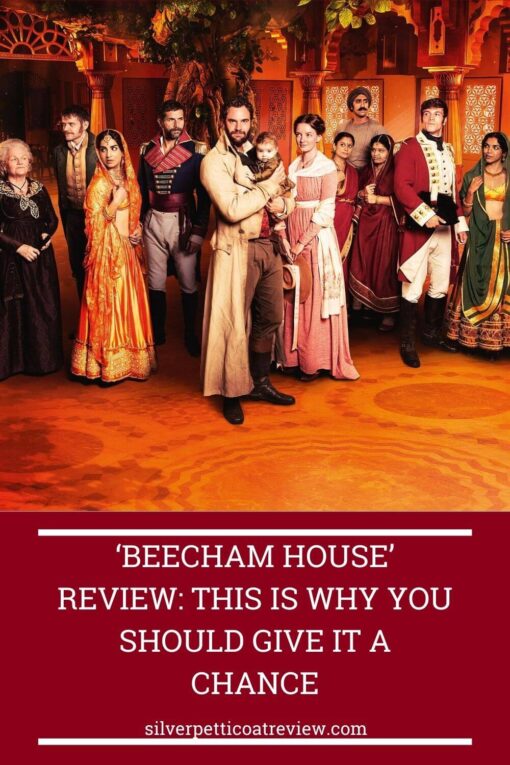 Are you looking for a new romantic period drama to watch? Read our review of the delectable Beecham House!

Beecham House premiered this summer on PBS Masterpiece but hasn’t received the same attention as Sanditon or Poldark. It’s also had polarizing reactions from the audience and critics alike.

However, Beecham House is much better than many give it credit for and is worth checking out. It’s a lovely period drama series full of romance, suspense, gorgeous costumes, entertaining characters, popular British actors, mustache-twirling villains, and more.

Gurinder Chadha’s new six-part drama series Beecham House is set on the cusp of the 19th century in Delhi before the British ruled in that region.

Tom Bateman (Vanity Fair, Jekyll and Hyde, Murder on the Orient Express) steps into the role of enigmatic, soulful John Beecham, a handsome former soldier who has purchased the magnificent mansion, Beecham House, to begin a new life with his family.

The story of John Beecham begins with a touch of mystery. He shows up at Beecham House with a baby. Is it his baby? Who’s the mother? Is he married? And he’s not willing to spare any details. The servants (and later Beecham’s family), have no idea what is going on.

Plus, when John begins to show a romantic interest in Margaret Osborne (Dakota Blue Richards), a kind-hearted young British woman who was abandoned in India, more questions are raised. To say too much would give away the mysteries of the story. Just know it’s an engaging plot with interesting characters.

Other characters include the meddling mother played by Downton Abbey’s Lesley Nicol, the somewhat villainous French soldier played by Mr. Selfridge’s Gregory Fitoussi, Leo Suter (Sanditon) as the wild brother, Daniel, Marc Warren as Beecham’s old friend and new business partner, Pallavi Sharda as Chandrika – a mysterious woman from John’s past, Shriya Pilgaonkar as the naïve Chanchal who falls in love with Daniel. And that’s just some of the characters.

Beecham House also has many romances to enjoy. There’s the central love story between John and Margaret. And you know I’ll watch any romance between characters named John and Margaret! (Yes, if I can find ways to talk about North & South, I will!)

The ending of the series has a gorgeous and swoony romantic scene that is beautiful to see. If for nothing else, watch for that!

I also felt invested in some of the stories in flashbacks and the promising romances with Chanchal. However, I don’t want to give away too much.

SHOULD YOU WATCH BEECHAM HOUSE?

Look, Beecham House is not going to win any Emmy’s, but it’s a fun period romp full of romance, beautiful production designs, and a swoony leading man a la Mr. Darcy or Poldark. Tom Bateman broods with the charisma of a future star, and he’s sure to get more prominent roles in the future.

So, he’s one to watch out for as a promising new actor. Bateman would make an excellent Mr. Darcy, for example.

If I had one complaint, it would be that the mysteries are easy to figure out, and the villain is easy to recognize. Still, the lack of surprises doesn’t take away from the enjoyment of the series. I know a couple will get together at the end of a romantic comedy, and I still happily watch it!

Filmmakers don’t always need to subvert our expectations or be shocking. Instead, a predictable but enjoyable series can be just the comfort we need!

At its heart, Beecham House is romance escapism at its best. And no, that’s not an insult. While I think the romance genre (and other “escapist” genres such as fantasy) deserve more respect than allocating it to mere escapism, the romantic melodrama (what Beecham House is) can be fabulous fun.

The genre is often thrilling and not as easy as it seems to do well, which it does! Beecham House is what it’s meant to be, and that’s why you should give it a chance.

Overall, if you enjoy Gurinder Chadha’s films such as Bend it Like Beckham, Viceroy’s House, or Bride and Prejudice, then you’ll likely appreciate the stylized romanticism of Beecham House. Don’t watch this show for realism. It’s the equivalent of an escapist historical romance you read on a sunny day at the beach. And again, that’s a compliment!

But do watch it for good, old-fashioned period drama entertainment (and with a little more diversity). While it starts slow, the series picks up pace quickly and becomes a fun, addictive watch and worthy of your attention.

If you choose to watch, I do have a warning, however. Beecham House ends on a cliffhanger…a huge cliffhanger, and unfortunately, ITV canceled the series. ITV’s gone on a canceling spree (including Sanditon), and Beecham House got the ax. If you don’t want to be left hanging, you could finish the series with the Taj Mahal scene and feel happily satisfied.

Where to Watch: PBS Passport (limited time), PBS Masterpiece Amazon Channel. You can also buy it on Digital and DVD.

Have you seen Beecham House? What are your thoughts on this period drama? Do you agree with our review of Beecham House? Let us know in the comments.

6 thoughts on “‘Beecham House’ Review: This is Why You Should Give It a Chance”