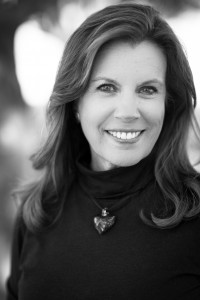 Today we’re happy to have the awesome author, Cricket Rohman of the literary fiction novel Kindergarten Baby: a novel and the sequel coming out in March, A Break in the Clouds,  here to take our test! So please give Cricket a warm welcome and read her fun answers below to get to know more about her and her books. Oh, and don’t forget to read her interesting bio…

I love books…period!  Digital books, books with pages, books with pictures: the good, the bad, and even the ugly.  I learn or feel something from all books.  Okay. I will quit stalling. One of my favorites is Sue Monk Kidd’s The Secret Life of Bees because it’s swarming with realistic female characters including a young, gutsy girl searching for her mother.

I like to laugh when I watch a movie so I usually head for wacky comedies like The Heat with Sandra Bullock. Ever since the 9/11 I’ve been a bit of a news junky. Other than that I enjoy the comedy Modern Family offers and drama of Grimm.

I used to like Alan Alda in Mash but I was a mere child then, so not sure that counts. Lately I have a thing for the sheriff in Longmire. (I decided to take on this question literally.)

Hmm. This is a tough one.  Perhaps, Mr. Big from Sex in the City. I know, I know…he’s kind of a looker but come on. Would you want a guy that is missing in action for weeks (or was it months) at a time?

Depends on my mood and setting.  Tyrone Wells is growing on me, especially his Metal & Wood CD.

Most of the characters I like and admire live difficult, dangerous lives.  I don’t want that.  Real life is difficult and dangerous enough.  I do, however, love the idea (not the reality) of trying to survive in wilderness areas. I know. That sounds kind of odd for me. With that said, I would like to live as Anna Pigeon, a National Park Service ranger, in Nevada Barr’s series of thrilling, life-and-death novels … for a while.

Just finished Jennifer Cruisie’s The Cinderella Deal. I think I chose it solely due to my curiosity of its title since I used the term Cinderella in both of my novels.  I loved Crusie’s humor.

I’ve been a work-driven human most of my life. Fortunately, I’ve enjoyed almost all of the “work” so far.  That’s good because as a former educator every day was a 12-hour day.  A guilty pleasure or luxury at this point in my life is to spend 6-8 hours of my day writing. Of course, that writing day includes some really good coffee and a bite or two of dark chocolate.

I would definitely be a dog, a really good dog.  Maybe an Australian heeler like my current dog or a mastiff like the dog in my first novel. And I would have a wonderful owner that understood and appreciated me … and let me sleep on the bed.

I would love to see John O’brien’s series of post-apocalyptic books (A New World) adapted for a TV series.  That would give TWD some real competition.  I happen to know he is currently writing book #10.   Any TV producers out there???

“Once upon a time . . . Cricket Rohman was born in Racine, Wisconsin but soon moved to the Chicago area, and later on to Estes Park, Colorado, where deer, elk, and bobcats wandered by her home on a daily basis.

“I wish I could say that it was my life long dream to be a writer, but that is not the truth.  I did not suffer a severe bite from the writing bug until after high school.”

Before heading down the mountain to attend college in Greeley, Colorado, Cricket took up playing the guitar and sang with her brilliant brother’s folk group, The Sundowners, and later, Friendship Sloop.  During these singing years she was bitten by the show-biz bug and appeared in a few TV pilots, numerous commercials, and theatrical voice-overs.  And, best of all, the writing bug began to nibble.

“There is no doubt in my mind that the initial inspiration for my first novel, Kindergarten Baby, originated in my own kindergarten classroom.  At first the story was going to be about a sweet kinder teacher . . . teaching.  Well, one thing led to another; my brain went off in its own direction, on its own tangents, and there were days when thoughts popped up that I didn’t know I was capable of thinking.  OMG!  Where did that come from? I wondered.  Some friends and family wondered, too.”

Book 2 titled A Break in the Clouds picks up where Kindergarten Baby leaves off. It will be available March 2014. 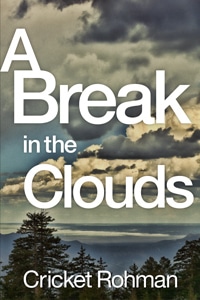 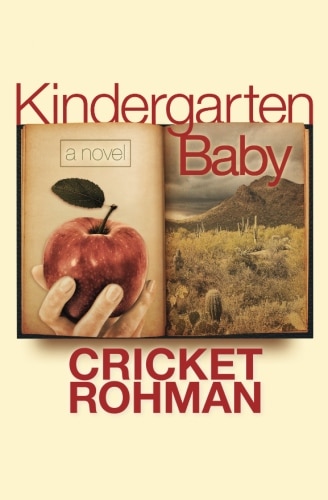 Lindsey Lark, orphaned as a young child, often turned to fairy tales for comfort, joy, and survival. Now she’s all grown up and appears to live the perfect life; she’s pretty, she’s smart, and she’s the best kindergarten teacher in the southwest. The students, with all their hilarious classroom antics, keep her smiling—most of the time.

But this school year is different. A sudden emotional shock ignites an odd internal journey as Lindsey attempts to reclaim an inkling of happiness, confidence, and dignity. Fate leads her to a life and death situation at the Grand Canyon, a career-changing event in a barn in North Dakota, and, finally, an emotional rebirth in the Zuni Mountain wilderness.

Lindsey cherishes the companionship of her delightful dog, Wendell. The students’ heart wrenching traumas and their comical comments, combined with her desire to be a shining light in their lives, provide an escape from her problems … sometimes.
Though lies from many, infidelity from one, and secret intimidation from a mysterious stranger add new challenges to her life, she still dreams of and hopes for romance, love, family, and the happily ever after. Will any of her dreams come true?

Readers who love fairy tales, dogs—the four-legged and the two-legged variety—young children, school, and suspense … readers who love love … will want to read this book.

Our romance-themed entertainment site is on a mission to help you find the best period dramas, romance movies, TV shows, and books. Other topics include Jane Austen, Classic Hollywood, TV Couples, Fairy Tales, Romantic Living, Romanticism, and more. We’re damsels not in distress fighting for the all-new optimistic Romantic Revolution. Join us and subscribe. For more information, see our About, Old-Fashioned Romance 101, Modern Romanticism 101, and Romantic Living 101.
Pin this article to read later! And make sure to follow us on Pinterest.
By Autumn Topping on February 28th, 2014