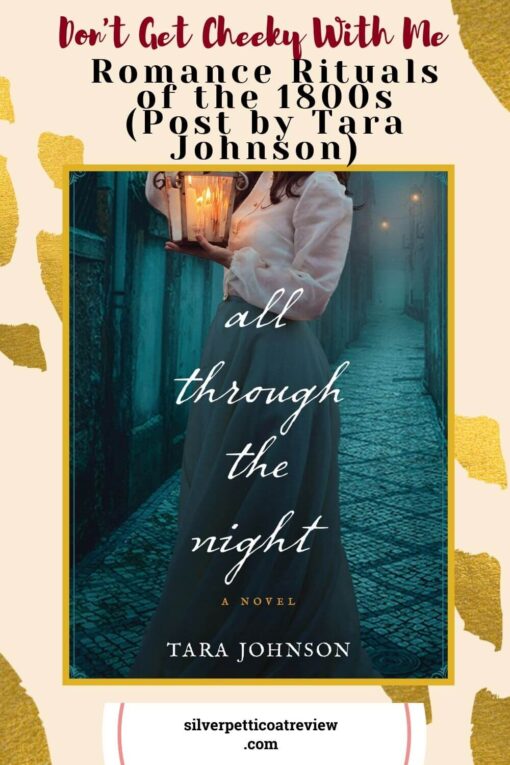 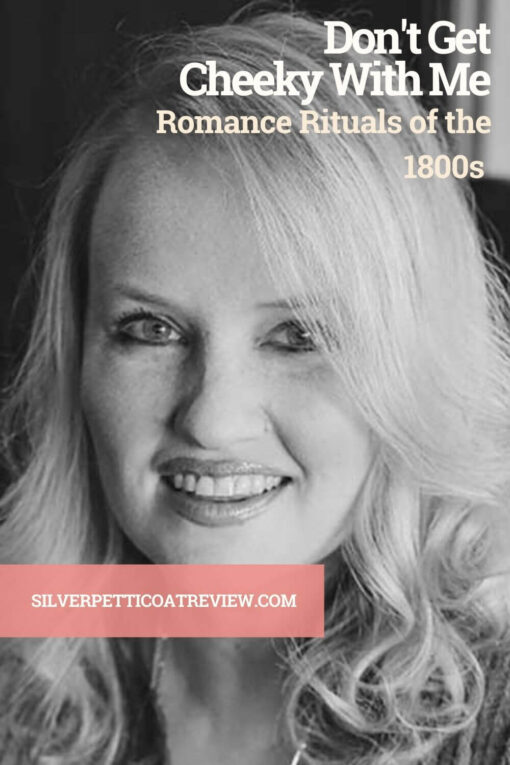 Want to know what 19th-century romance was like? Author Tara Johnson talks about her historical romance novel, All Through the Night, and romance rituals of the 1800s.

Chaperoned conversations. Walks and carriage rides. Dances and parties. These are the things most of us usually associate with romance and courting rituals of the 1800s, but there was so much more nuance to the art of romance in the Victorian era than many would have us believe.

If a gentleman saw a young lady at a dance or other social event, they would have to be properly introduced through mutual acquaintances. Navigating the tricky world of the social party could leave a man floundering, especially when you consider the elaborate system of codes women communicated through their parlor fans. Here are a few:

If a fellow did find a girl who struck his fancy and longed to escort her home under the watchful eyes of her chaperones, he would give her his card. At the end of the event, the young lady would look through her collection of cards and choose the man she preferred.

If the gentleman found her company agreeable, he would then write a letter to the young lady’s father seeking his permission to court her. There were stringent guidelines for this step as well.

According to Emily Thornwell, contributor to The Lady’s Guide to Perfect Gentility (1856), “Observe that letters of introduction are never sealed by well-bred people. Every letter to a superior ought to be folded in an envelope. . . . We must use sealing wax; men usually select red.”

Once the father agreed, the young lady would write to the gentleman and invite him to come call. However, she wasn’t to appear overly eager to see him (Thornwell). The entire affair was for the female to appear to be granting a favor to the male caller, to grace him with her presence. Typical courting activities included parlor games, singing, playing piano, and talking.

To Gift or Not to Gift

A rule of courtship, according to T. S. Arthur’s Advice to Young Ladies, was no respectable young miss should accept a present from a gentleman until he offered a proposal of marriage, unless the gift was comprised of fruit, flowers, or candy. “Their perishable nature exempts them from the ban put upon more enduring memorials.”

Along these lines, flowers had their own meaning all together. Floriography was a term coined during the Victorian era to define the meaning behind flowers.

This custom became so popular, people even carried around flower dictionaries to help them remember the meaning behind the flower they might be giving or receiving.

If a man gifted a woman with flowers and their relationship progressed to matrimony, it was highly likely that she would choose one or two of the symbolic flowers he sent her during their courtship as part of her bridal bouquet.

Marriage was more often settled by pen and paper than anything else during this time. Letters flowed back and forth between courting couples and was the one place where they could truly express their deepest thoughts.

When the Civil War erupted between the states in 1861, the passionate exchange of letters only grew. Consider this now-famous excerpt from Sullivan Ballou to his wife just before the First Battle of Bull Run.

Sarah, never forget how much I love you, and when my last breath escapes me on the battlefield, it will whisper your name. . . . If the dead can come back to this earth and flit unseen around those they loved, I shall always be near you; in the gladdest days and in the darkest nights . . . always, always, and if there be a soft breeze upon your cheek, it shall be my breath, as the cool air fans your throbbing temple, it shall be my spirit passing by. Sarah, do not mourn me dead; think I am gone and wait for thee, for we shall meet again. . . .

Of course, with the arrival of the Civil War, traditions and decorum took a back seat to life and death. Rules became lax. Couples married in haste. Life was fleeting and suddenly anxious young ladies and young soldiers had little patience for drawn-out courtships. Some couples even found themselves forced to marry for propriety’s sake.

In my new novel, All Through the Night, surgeon Joshua Ivy and nurse Cadence Piper are doing all they can to help the wounded on the battlefield. As Cadence cares for his children behind the battle lines and the attraction between them grows, Joshua’s captain fears their reputations will be shattered unless he can convince Joshua to do the honorable thing.

Cadence knew something was wrong the moment Joshua stormed to her side and pulled her away from her washpot, yanking the paddle from her hand and tossing it into the grass.

“What are you doing?”

He cupped her elbow. “We need to speak. Now.”

Her heart pinched as he led her into the privacy of the woods behind the laundering tents. Within the canopy of the forest, she turned to him and clutched his sleeve.

“What’s wrong? Is it that man who was watching the children? Is he here?”

He blinked and shook his head. “No. No, nothing like that.”

“Oh.” Her heart resumed its normal rhythm. “Then what is it?”

He swallowed. “Captain Archer, with the help of Mrs. Meade, has discovered you are not married.”

She studied him, trying to understand. “Am I supposed to be?”

“If you remember, according to Miss Dix, yes.”

“But you came to me during the influenza outbreak and asked me to come to the hospital to work.”

A muscle ticked in his jaw. “Why do you think I suggested you wear that wedding band while at Judiciary Square?”

“To eliminate questions. To protect my reputation. But you promised my unattached status would not be an issue. You said there were measures you could take to ensure I could continue working.”

He rubbed the back of his neck. “Which is why I’m here now. And it’s not just the fact that you’re unmarried. Captain Archer also believes having you care for my children with both of us unwed is . . . indecent.”

“Yes.” Sorrow clouded his expression as his gaze held hers. “Forgive me. In my haste to protect my children, I didn’t consider every aspect of this situation. In the tumult of war, who could imagine superiors noticing or caring about the platonic arrangements between a laundress and a surgeon?” He blew out a thick breath. “I hold sway at Judiciary Square. I have none out here. The fault is mine.”

“What shall be done then?”

His lips pressed tight. “We have two options. We either marry immediately or we return home, for neither of us will be allowed to treat the wounded any longer.”

She stepped backward. Marry? Marry Joshua? She lifted her gaze, and a warm flush washed through her at the intense look in his eyes. Heat spread through her belly. “I—I don’t know what to say.”

“I know. It’s a horrible shock. I don’t want you to feel you have to choose, but Captain Archer has given us an ultimatum.”

So she had been correct—Joshua didn’t want her. Not really. He needed to protect the children. He wanted to care for the wounded men. She was only the means to an end.

She fought the urge to cry as she felt a tickle rise in her nose. “And Captain Archer assures us both we can continue to doctor and nurse upon our marriage?”

“And you believe the children are still safer here than back home with Miriam?”

She looked into his eyes and her world tilted. She loved him. How she yearned to have him love her in return, but she would not throw herself at his feet.

“What do you want, Joshua?”

What would a good romance be without a bit of angst?

I suppose the nuance of the turn of a parlor fan isn’t any different than the intricate code of texting today. Romance is romance. Breaking the rules is unforgivable by some, and for others, rules are made to be broken. History repeats itself, or rather human nature repeats itself.

All Through the Night Official Synopsis:

With her stammering tongue and quiet ways, Cadence Piper has always struggled to be accepted. After the death of her mother, Cadence sets her heart on becoming a nurse, both to erase the stain her brother has left on the family’s honor and to find long-sought approval in the eyes of her father. When Dorothea Dix turns her away due to her young age and pretty face, Cadence finds another way to serve . . . singing to the soldiers in Judiciary Square Hospital. Only one stubborn doctor stands in her way.

Joshua Ivy is an intense man with a compassionate heart for the hurting and downtrodden. The one thing he can’t have is an idealistic woman destroying the plans he’s so carefully laid. When the chaos of war thrusts Cadence into the middle of his clandestine activities, he must decide if the lives at stake, and his own heart, are worth the risk of letting Cadence inside.

Everything changes when Joshua and Cadence unearth the workings of a secret society so vile, the course of their lives, and the war, could be altered forever. If they fight an enemy they cannot see, will the One who sees all show them the way in the darkest night?

Tara Johnson is a passionate lover of stories who uses fiction, nonfiction, song, and laughter to share her testimony of how God led her into freedom after spending years living shackled to the expectations of others. Tara is the author of three novels set during the Civil War: Engraved on the Heart, Where Dandelions Bloom, and All Through the Night, which released in January 2021. She is a member of American Christian Fiction Writers and makes her home in Arkansas with her husband and three children. Visit her online at tarajohnsonstories.com.

DID YOU ENJOY READING ABOUT THE ROMANCE RITUALS OF THE 1800s? WANT TO BUY THE BOOK ALL THROUGH THE NIGHT? CHOOSE FROM THE BUY LINKS HERE.

By The Silver Petticoat Review on February 18th, 2021