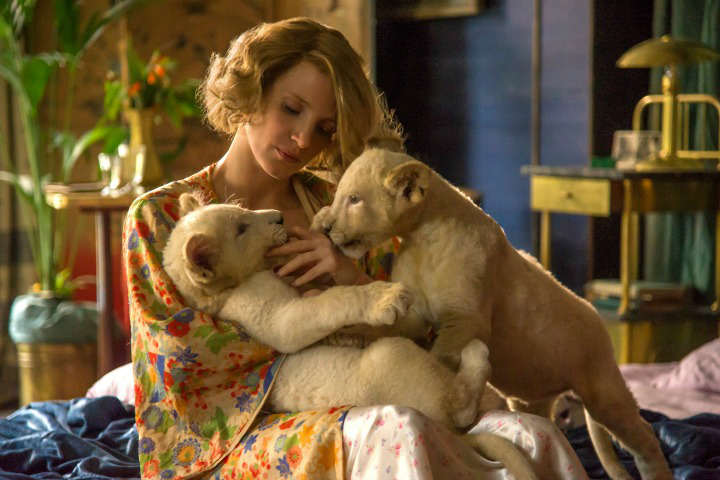 There’s a reason why films inspired by true events in history are so powerful. They’re based in fact but they also include the dramatic impacts cinematic creativity allows for. In other words, a Hollywood version of history which makes for an entertaining spectacle. A recent film in the genre is The Zookeeper’s Wife. A sweeping story that may take some creative liberties, but is one of the most compelling dramas I’ve seen in a while.

The story follows Antonina Żabiński (Jessica Chastain), a woman living in a world on the cusp of WWII in 1939, Warsaw Poland. A mother of one and devoted wife to her husband, Dr. Jan Żabiński (Johan Heldenbergh), Antonina’s family is a happy one. They operate one of Warsaw’s most prestigious zoos and live on the grounds where they house the animals. As the seasons change and they enter the 1940s, an increase in the Nazi presence inspires her husband to suggest she and their son leave. She refuses, and they carry on the daily operation of their lives until tragedy strikes.

Soon, bombs drop over their zoo, an act that kills many of their animals. Worried about the survival of their exotic animals, they arrange to send them to Germany. This is in agreement with a Nazi soldier (Daniel Brühl), who claims to first and foremost be a zoologist. He says once the war is over, they’ll return them all. However, as time passes, everything changes when Jan becomes involved in the plight of the Jews…

I find some stories are difficult to paint a picture of because they’re so poignant that putting words to paper proves a task. And when I review something with such a fervent message, I often find myself without words for fear of inaccurately describing the story. In the case of The Zookeeper’s Wife, as the narrative unravels, I discovered this story is nothing like I thought it would be. Originally, I had the idea in my mind that this was a tale of the zoo and its survival instead of what the film actually is. 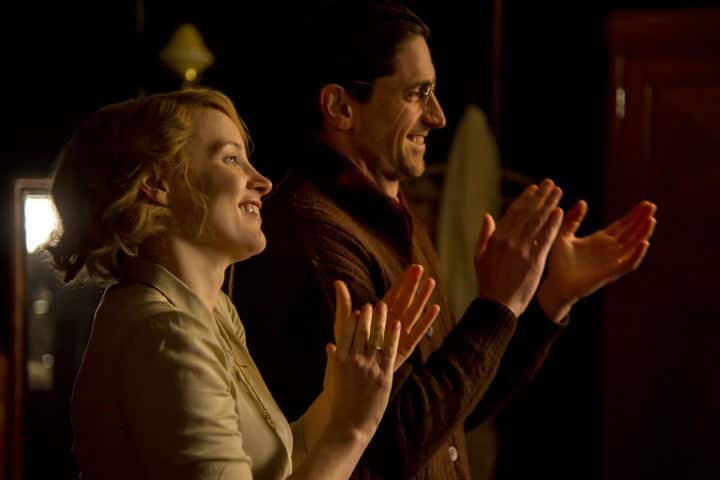 Running just over two hours, a great deal of time and ground is covered. From the rumblings of a war that doesn’t immediately present a threat to the full on invasion, it’s this which frames the entire production. The shifting of emotions, changing lives and way of living is bleak. The film’s production portrays this with exquisite accuracy. Everything “feels” very real. What begins with “light” and a tone of happiness spirals into a kind of invisible fear and dread. We see everything unfold, and with these characters, we wonder and hope for the best. These protagonists’ work their way into viewer’s hearts which means we “feel” panic along with them.

All that said, in no way is this film anything but beautiful. From the production qualities to the costumes, everything is a golden example of what good film making is. The cast is brilliant. Led by Chastain, there’s a reason she was cast in this role. She performs the role with heart, gumption, and vulnerability. All qualities this character is made of. I admire this woman and all she did to protect human life during a time when men judged the worthiness of their fellow man. Daniel Brühl also co-stars. He plays a conflicted yet somehow interesting character who I never quite figure out.

If you haven’t seen this, I highly recommend The Zookeeper’s Wife. It’s not an easy film to watch but is worth every tear, milestone and moment. It’s a breathtaking journey of the risk and fights one family takes to save the lives of the innocent.

Where to Watch: Rent or buy on Amazon Video, DVD or BluRay. Or you can watch this on DVD and BluRay on Netflix.

Content note: The Zookeeper’s Wife contains physical and emotional war violence (rape, attempted rape), a brief scene of female nudity, and other adult situations. There is also some depiction of soldiers shooting the animals; some of the scenes are “intense” but there’s nothing overly explicit. ‘Zookeeper’ is rated PG-13.

Our romance-themed entertainment site is on a mission to help you find the best period dramas, romance movies, TV shows, and books. Other topics include Jane Austen, Classic Hollywood, TV Couples, Fairy Tales, Romantic Living, Romanticism, and more. We’re damsels not in distress fighting for the all-new optimistic Romantic Revolution. Join us and subscribe. For more information, see our About, Old-Fashioned Romance 101, Modern Romanticism 101, and Romantic Living 101.
Pin this article to read later! And make sure to follow us on Pinterest.
By Rissi JC on August 7th, 2017