THE SETUP: A romantic comedy about Andrew, a romantic who works at an online dating service and Zelda, a lawyer and the “comprehensive account of their relationship.”

If you’re looking for a bit of fluff entertainment to pass the time with a cute romance, then this show might be a great choice. Unlike the similar series Manhattan Love Story, this is a romance you can actually root for. There’s nothing groundbreaking here, nothing particularly memorable, yet it is still fun to watch despite (or perhaps because?) the stereotypical Hollywood destiny romance thrown in. And with a believable chemistry between Ben Feldman as Andrew and Cristin Milioti as Zelda, you may just find yourself smiling happily along.

However, I do have a few hang ups. At both the beginning and the end of the series a narrator tells us that we are going to witness eight months of their relationship. Does that mean at the end of the eight months that they break up? Or do they get married? Would season 2 be about the first year of marriage? Then season 3 about the first kid? That could potentially be funny, especially people looking for a show with characters they can relate to with “real” problems. If they can find a way to satirize normal, everyday life this could grow to be a hit. But if the writers plan to go down a 500 Days of Summer route, I ask, in a TV show setting…what would be the point? I don’t want to watch a romantic comedy sitcom only leading up to the end of the relationship. But we shall have to wait and see what route the writers choose to take. Unfortunately, some viewers may not want to stick around to find out.

For me, the best part of the series was Lenora Crichlow (of Being Human fame) as Stephie, Zelda’s incredibly funny, boy crazy best friend. She’s a scene stealer and will no doubt make you laugh out loud throughout the episode. I ask: When is Lenora going to get her own series? As good as the rest of the cast was she kind of outshone everybody with her charisma and excellent comedic timing.

In all, while it’s cute and entertaining to watch, this is the type of series I would probably watch on Netflix or eventually watch after recording quite a few episodes on the DVR. I rate it 4 corsets and 4 vintage hearts. 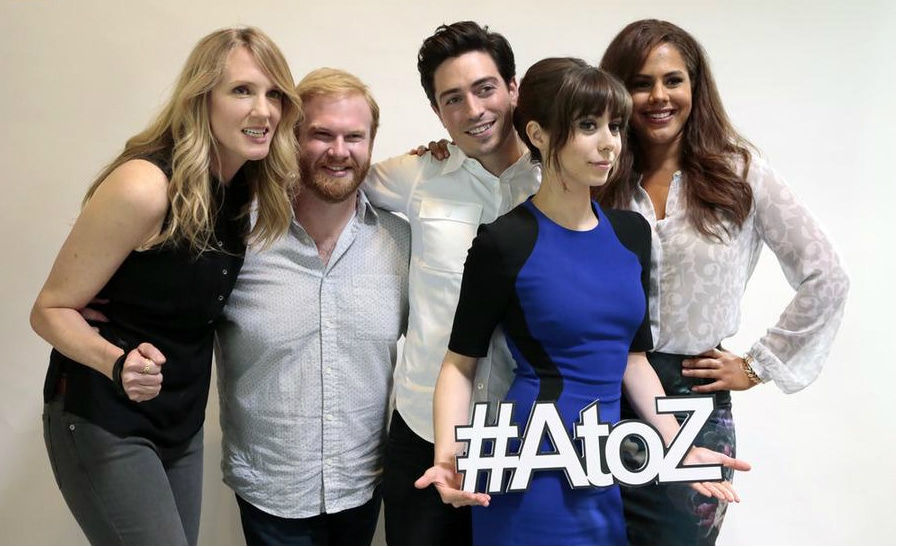 While not a perfect pilot, I thought the premiere episode had a lot to love. A romantic comedy with heart, A to Z follows the romance between Andrew and Zelda. Andrew works for an online dating company and Zelda is a lawyer. Andrew is a man’s man with a love for well love, and Zelda is a girlie girl but completely closed off to dating. Then they meet for the first time, and there is an instant attraction. Or is this the first time they meet? Part of the cute premise revolves around the idea of fate. You see, a few years back Andrew saw a beautiful girl in a silver dress at a concert and imagined his life with her. Now he thinks he’s found her again in Zelda, but was it her to begin with or has Andrew’s imagination run wild?

Add in an adorable cast, especially Ben Feldman as Andrew (loved him in Drop Dead Diva and still disappointed I didn’t get a Stacy/Fred reunion), and you make this show definitely worth watching. For me, I can see myself watching this on Netflix when I just want to binge a light-hearted show with a side of fluff. The humor is decent (though I think the Back to the Future bit was overkill), with a standout performance by Lenora Crichlow (Being Human). Her comedic timing is so spot-on that I found myself wondering why she’s wasting her talents as the best friend character. No, she deserves a show of her own. I’ve missed her since she left Being Human behind. As for Andrew’s best friend on the other hand…did he have as good of comedic timing? No, and I found him to be quite irritating to be honest and believe the show would be much improved if his character suddenly left town. Overall though, the idea is fun with cute chemistry between the leads, but I’m not sure I can see this lasting for more than one season. I rate A to Z 3 and 1/2 corsets and 4 vintage hearts for romance.

I think this may just be the cutest comedy this season! How I Met Your Mother’s Cristin Milioti and Mad Men’s Ben Feldman team up in this adorable rom-com. We are told at the beginning that these two will date for exactly eight months, three weeks, five days, and one hour. What exactly happens at the end of that period of time is open to speculation. On this funny, charming, and did I mention adorable journey we will have front row seats to learn everything from A to Z about their relationship. I personally loved Cristin Milioti in How I Met Your Mother and was rather stunned and upset by it’s finale. With this show I feel like Cristin Milioti gets a second chance at love, and I get a second chance to see her hopefully get the happy ending she deserves. Add in the seriously yummy Ben Feldman and I’m sold. These two have some insane chemistry that is simply swoon worthy. I foresee good things for this show’s future.

Rating: 5 stars for both romance and show

How many vintage hearts would you give A to Z? Leave a comment.

Our romance-themed entertainment site is on a mission to help you find the best period dramas, romance movies, TV shows, and books. Other topics include Jane Austen, Classic Hollywood, TV Couples, Fairy Tales, Romantic Living, Romanticism, and more. We’re damsels not in distress fighting for the all-new optimistic Romantic Revolution. Join us and subscribe. For more information, see our About, Old-Fashioned Romance 101, Modern Romanticism 101, and Romantic Living 101.
Pin this article to read later! And make sure to follow us on Pinterest.
By The Silver Petticoat Review on October 10th, 2014

2 thoughts on “A to Z: Three Takes on the New Romantic Series”