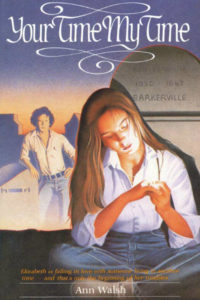 YA Book Review: Your Time My Time by Ann Walsh

Your Time My Time (1984) is the debut novel of Ann Walsh, a Canadian writer, who has since gone on to write numerous YA novels. A common thread weaving its way through much of her authorship is the setting; she calls herself a Cariboo writer and writes about the Cariboo.

The Cariboo is a very rural district in the central interior of Canada’s westernmost province, British Columbia (B.C.), an area with a colorful past in 19th-century gold fever and boomtowns and their subsequent busts. This rich local history provides the inspiration for many of her stories, including her debut novel.

Against her will, 15-year-old city girl, Elizabeth Connell, is now stuck in the very small and very remote community of Wells, B.C. for an entire year. Her parents have separated and her mother has taken a job as a cook at the local hotel/greasy spoon/saloon. She misses her father and her little brother and her former life in the big city of Vancouver.

During the dog days of summer, waiting for school to start and with nothing to do and no potential peers in sight, Elizabeth decides to check out the local tourist draw in the area, namely the ghost town of Barkerville, which is now an open-air museum. The town and its history grips her, captivates her, and she begins spending all her free time there just hanging about.

A Golden Ring in a Graveyard

After much exploring of the township and its surroundings, she discovers the old cemetery and soon finds a peaceful spot that becomes her place to read and write and daydream and doze. It is in the graveyard that she one day uncovers a small gold ring, a ring with some rather inexplicable powers.

Twisting the ring on her finger, she is transported back to the 19th century, to Barkerville’s gold rush heyday. And it is there – in the rather new cemetery of 1870 – that she meets a freckled boy with a crooked nose, a curious nature and a loving heart, who swiftly captures her own heart.

She and Steve begin to meet as much as they can in the graveyard – she always returning to his time. As their love grows and their need to be together blossoms, it becomes increasingly difficult to juggle the disparate timelines. Elizabeth constantly argues with her mother, lying to her in order to get to her trysts with Steve. She’s not crazy, but everyone else seems to think she is. And she and Steve learn that she cannot travel outside of the cemetery into Barkerville of 1870, and she can take no one with her on these travels. There are boundaries to this time travel.

So, what’s to become of a love bridging two time periods that is ultimately confined to a little graveyard outside of a ghost town in the Canadian wilderness? Read the book and find out.

RELATED: Gentlemen Out of Time (Why We Love Them)

I’ll say it right up front. I am not a neutral reader and objective reviewer here. I grew up in the Cariboo in British Columbia, so this book is covering my hood. When I first read Your Time My Time in elementary school back in the mid-1980s, I cannot express how exciting it was as a child to read a book that mentioned my hometown by name and depicted local history that I felt was also mine. That my own nowhereville could be a source of inspiration to the imagination was, well, inspirational and terribly exciting to my childhood self.

So, it was with a certain amount of trepidation that I reapproached this childhood favorite. I hadn’t read it since elementary school. Would it still enchant? Is the magic and wonder still there?

The short answer is no – and yet, still yes. The book has its weaknesses – it is a debut. It wants greater character development and deeper emotional descriptions. And yet, perhaps that assessment is clouded by the current trends in YA lit for emo descriptions in painstakingly maudlin minutiae. So, to read a diary entry of a typical 15-year-old in the early ’80s (as you do in the book), well, there is something so pragmatically banal about it and, probably, something much more realistic.

The book still moved me. And whether that’s because it awakened a childhood nostalgia or brought on a bout of homesickness for this woman, who is a long way from home, I don’t know. But the story of these two, young, time-crossed lovers does indeed move. The tears still do roll. The ending still pulls on the heartstrings.

It’s still worth a read.

I would love to see this on the screen, but mostly because it would be pretty darn cool to see my hood depicted on film. It would definitely have to be filmed on location. Barkerville stands there still.

Content Note: There is nothing to come after – all very clean.

Have you ever revisited a favorite read from childhood? Did it disappoint? Or was it still as magical as you remembered?

Our romance-themed entertainment site is on a mission to help you find the best period dramas, romance movies, TV shows, and books. Other topics include Jane Austen, Classic Hollywood, TV Couples, Fairy Tales, Romantic Living, Romanticism, and more. We’re damsels not in distress fighting for the all-new optimistic Romantic Revolution. Join us and subscribe. For more information, see our About, Old-Fashioned Romance 101, Modern Romanticism 101, and Romantic Living 101.
Pin this article to read later! And make sure to follow us on Pinterest.
By Jessica Jørgensen on June 5th, 2017