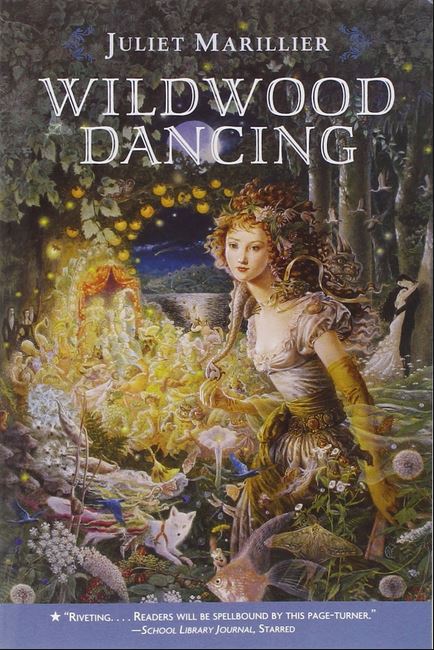 Wildwood Dancing by Juliet Marillier is YA fantasy by a gifted writer. The novel is set in Transylvania and includes some vampire lore, as well as retelling both The Frog Prince and The Twelve Dancing Princesses. Told through the eyes of Jena, the second oldest daughter, the fairy tale elements are strong. Jena’s best friend is Gogu, a frog who can talk to her and is obviously enchanted, and the five sisters have a magic portal to another world where they can dance until their shoes fall to pieces. These elements, in addition to the Night People and the vampire lore that accompanies them, make for a busy but well-structured novel.

Of course, there are other unique elements to the story. The Dancing Glade, part of that other world, is only accessible by sailing across the Deadwash, a lake where the girls’ cousin, Costin, tragically drowned as a boy. Their other cousin, Cezar, was there (as was Jena) and they both react to his death in different ways. Cezar grows to hate and fear all magic, while Jena becomes cautious but respectful of it. This single event, referenced often throughout the novel, shapes the narrative and the plot in ways that do not become clear until the end. Throughout the book, Draguta, the Witch of the Wood, is there, quietly influencing events and offering advice.

The story opens with a merchant and his five daughters. Due to his poor health, he is leaving for the winter to regain his strength. The two oldest daughters, Jena and Tati, are left in charge of the family farm, business and their younger sisters while their father is away. After a series of tragic events, the girls find their cousin Cezar has taken control of their situation and they are powerful to stop him. Meanwhile, the Dancing Glade is hosting the Night People. They make themselves comfortable in the sisters’ lives, in both worlds.

As the conflict between Cezar and the sisters grows, so does the conflict between the people of the valley and those in the other world, due in part to the presence of the Night People. Jena begins to wonder if perhaps it would be safer for everyone if she and her sisters stayed in their own world. This discussion is further complicated by Tati’s new suitor, Sorrow, who came with the Night People, Tati’s unwillingness to give him up and Jena’s fear of losing her sister. Meanwhile, her best friend Gogu is acting strangely. Faced with maintaining the balance between these two worlds, Jena faces her own dreams, desires and fears before finally realizing where she belongs and who she loves.

The story spans the two worlds, and focuses on the interactions that the sisters; particularly Jena and Tati; have with both worlds, particularly the romantic tangles they both find themselves in. The sisters are all different, and Jena and Tati’s stories reflect that. Tati has one suitor throughout the book, Sorrow. Their love story is irrational and can be described as love at first sight, or fate. Sorrow embarks on a quest to save his sister, bring Tati to the other world and to rid the Valley in our world of the Night People. Tati’s task is to maintain faith in true love, and believe that he will succeed. However, as time goes on, she begins to lose faith and only her sisters and their love keep her alive.

In contrast, Jena has three suitors, one from her own world, one of the Night People and one who has been part of both. Because Jena is unaware of the attentions of all of her suitors until later, this story is more gradual and her eventual choice requires an action of faith rather than just holding on in faith. Jena’s character is a doer and while she often makes poor choices, they all come from good intentions and she does what she can to fix things.

Both sisters go on a journey of trust and grow in faith before eventually finding happiness, but they have different goals and paths to get there. Marillier’s choice to weave these two different love stories together makes Wildwood Dancing a book that appeals to a wider audience.

Several themes stick out at me after reading this book. First, the idea that women can do anything they put their minds to is very present. Jena is a business woman, her sister Paula is a scholar and another sister, Julia, is very interested in horse breeding. Their father supports them in their dreams and tries to give them the tools to get there.  Another theme is that we all have to grow up and choose our own paths, even if they don’t make sense to others and the choices are hard.

One of the biggest themes, however, seems to be that appearances can be deceiving. Jena is afraid of Sorrow at first, and transformed Gogu bears a striking similarity to the monster in her dreams. She makes assumptions about them, based on appearances and her own fears. This nearly ruins everything for a wide variety of people.

The final theme, and maybe the most important one, is the importance of family, particularly of the bond between sisters. Jena and her sisters have a bond that outsiders can’t always understand and they are always looking out for each other in their own ways. This is the thread that ties the book together, as the relationship between the sisters is woven through every aspect. One of the major conflicts, in fact, is Jena’s fear of losing her sister and her realization that she has to let Tati make her own choices.

Despite, and perhaps because of, the busy plot, this is a book that does not get less fun with subsequent readings. Rather, because Marillier has planted clues about the resolution and characters’ true nature; later readings reveal things that might have been initially missed. At 400 pages, there are much worse ways to spend a weekend than curled up with an excellent book.

If you like this book, check out Marillier’s Sevenwaters Trilogy, East by Edith Pattou and the work of Jessica Day George.

Although I enjoy Wildwood Dancing, it can be problematic in that there is so much going on. While I think Marillier ties it all together in the end, the conclusion feels a little rushed for some characters. I also was not a fan of the whole “dying for love” subplot, especially when compared to Marillier’s other heroines (both in this story and her other books). I tried to not compare this to her other books, but one thing I love about Marillier’s writing is that she writes compelling characters that have real stakes and that you just like, despite their flaws. While I was not disappointed in the character of Jena, I was not thrilled with Tati. Was this an unfortunate side effect of seeing the story through Jena’s eyes? Perhaps, but I wish that half of the story had been a little more fleshed out.

As far as romance goes, I don’t want to spoil anything, but the fact that Wildwood Dancing is based off of The Frog Prince might give a hint as to who the romantic lead is. Jena’s romance with her “prince” was, to me, a lot more believable and fleshed out than that between Tati and Sorrow. I felt like that romance had a better payoff, for lack of a better word. This could, however, be just my personal preference for best-friends-fall-in-love romances, as opposed to dramatic it-must-be-fate romances (think Monica and Chandler versus Ross and Rachel).

I am really torn about this one. On one hand, the story is a fantasy with fantastic characters, a beautiful setting and a fun story by a talented author, so it’s begging to be adapted. However, a story told entirely in a specific character’s head can be problematic. I would also be concerned about how a story narrated by the main character would be translated, especially something this long. Would they use opening and closing monologues, occasional voice-overs or just cut that out all together? Another challenge, I think, would be Jena and Gogu’s relationship. In all of their conversations, no one but Jena can hear Gogu. It’s a fairly important plot point, and would have to be clear to the audience. There are some books that don’t translate well to film, and as much as I think this could be an amazing movie, I wonder if this might be one of those books better left on paper. However, if they had Juliet Marillier as part of the production team, then I could get behind it. Like with Hunger Games, an author’s direct involvement in most aspects of the adaptation can calm the nerves of the bookworms.

What do you think? Did you prefer the Tati/Sorrow story or the Jena/Gogu story? Do you think this book would translate well to film?

Our romance-themed entertainment site is on a mission to help you find the best period dramas, romance movies, TV shows, and books. Other topics include Jane Austen, Classic Hollywood, TV Couples, Fairy Tales, Romantic Living, Romanticism, and more. We’re damsels not in distress fighting for the all-new optimistic Romantic Revolution. Join us and subscribe. For more information, see our About, Old-Fashioned Romance 101, Modern Romanticism 101, and Romantic Living 101.
Pin this article to read later! And make sure to follow us on Pinterest.
By Bailey Cavender on June 17th, 2015