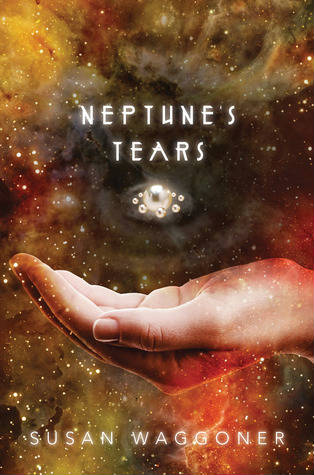 Set in the year 2218, Neptune’s Tears is a look at what makes people human. Is it sympathy for others? An appreciation of life? Or something else?

Zee is a teenage empath in London, working her way to what seems to be a bright future in healthcare. Empaths use the energy around them to create psychic connections with patients to help them heal. Zee, an ex-pat American living in London as an empath intern, can’t imagine doing anything else with her life.

Though empaths are discouraged from becoming too close with their patients, Zee has a solid friendship with one of her older patients, Mrs. Hart, who is also an ex-pat. Mrs. Hart is a former designer and created Neptune’s Tears, a setting of diamonds taken from Neptune many decades prior to her interactions with Zee in the hospital.

The name comes from the tragedy of the Neptune program. Robots dispatched to the planet eventually became sentient, creating bonds with each other, and understanding what it meant to feel pain, and lose friends. Conspiracies broke about the program, and mass propaganda was sent out to show the divide between robot and human emotions. When the robots sent their last batch of diamonds from Neptune, they became silent and unresponsive to Earth’s signals. Technology has evolved in leaps and bounds in Zee’s world, and though people live a lot longer (Mrs. Hart is about one hundred, which is the typical life expectancy), there are still things that science has not yet found a cure for. Zee discovers that Mrs. Hart has cancer during one of their sessions, but it is another patient, David, who has Zee’s attentions elsewhere.

David is in Zee’s hospital for a head wound, and she is assigned to his case at the last minute.

There is an instant attraction between the two, but Zee is worried that this will distract her from her role as an empath.

Though she keeps in with her training, Zee notices that there is something off about David. Fidgety and wanting to leave against the hospital’s orders, Zee manages to keep him from immediately going out the door. In their brief conversation, she finds out that David is an alien.

The aliens came to Earth several years prior and were peaceful, wanting to learn more about humankind. Though they appear similar to humans, except for being slightly taller than most, their race wanted to experience life as humans did, without the constant need only for survival. Though the aliens gave no indication that they would turn on humankind, people were still distrustful. Zee’s parents, especially her father, are fully behind the interactions between humans and aliens, but Zee is more cautious.

When Zee realizes David is alien, it rattles her, and she leaves quickly. But their connection is undeniable, and when a terrorist attack happens a few days later, David reappears again to help Zee with the swarm of people at the hospital.

The attack is a shock bomb, set off by an archaist group who had set off bombs previously in other cities. The bomb is silent and creates a slow death for those in its radius. It has the potential to kill victims from the inside out, through the use of shock waves to break down people’s internal organs. Zee’s hospital is inundated with the amount of people hit from the bomb, and she is grateful for David’s assistance with a large group of children. When the day finally calms down, Zee can’t deny the connection between the two of them, and they agree to meet up outside of the hospital. They have a fun time at an air boarding field outside of the city, but Zee is left feeling confused, especially when David kisses her, then almost immediately claims that he can’t get too close to her. Zee also notices a girl that has been close by to them all day, and wonders if David knows her, and what secrets he might not want to reveal.

Zee’s world is turned upside down when another shock bomb goes off shortly after the first, but this time, she is knocked unconscious with a reaction that she can’t gauge. Because of her traits that make her a good empath, it made her a receptor of the emotions of the people from the attack, which engulfed her mind, causing her to lose consciousness. Though Zee is unwilling to give up role as an empath, she is told that with practice, she can learn to control the effects of being a receptor, and possibly even be able to preemptively learn about the attacks.

As the attacks continue to happen, Zee and David draw closer; Zee learning to control the effects from the bombs going off, with David supporting her.

But for as much as they continue to see each other, David still won’t let Zee in, continually trying to convey that as much as he cares for her, they can’t really be together. When a fancy night out to celebrate her birthday ends in a mugging, with David and Zee both attacked, the truth comes out.

(SPOILER) David tells Zee that on his world, Omura, every citizen is part of a mass reproduction program that guarantees that their race won’t die out. When someone turns twenty-one, they must marry and begin reproducing. Though David is a guest on Earth, he has to return to Omura soon, with his research partner, Mia (the girl that Zee saw during their first date) otherwise there will be consequences. Because Zee is human, she cannot go with David. Stunned by this fact, Zee tries to convince David to stay on Earth, to find another option, but eventually he leaves.

Distraught over this information, Zee tries to distract herself from David’s leaving, and with more attacks and a slew of natural disasters occurring in succession, she has plenty on her mind and much to train for. Along with Mrs. Hart’s rapidly deteriorating health, Zee has a heavy load to carry. But David is ever in her thoughts, and when Mia reappears in Zee’s life, with the opportunity to find David, Zee snatches it. Though Zee and David reunite, their world is torn apart again when Zee volunteers to help with a plan to catch the head anarchist who has been setting off the bombs.

Though the plan is successful, Zee is still forced to face the fact that David must leave. She decides that she will go with him; that she would rather have a life on another planet with him, than a life without. But David has another secret to reveal (SPOILER): he’s not actually an alien. He is a time-traveler from a future Earth, sent back in time to gather information to bring into the future with him. A meteor is set to hit Zee’s Earth, and the people from David’s Earth have a strict limit for the people that they allow into the future. Zee is on a list called the Essentials, meaning that she helps with the rebuilding of humankind, after the meteor strike. As such, she would not be allowed to travel to the future with David. But Zee is adamant that they will find some way to be together, no matter what the future holds.

I’m a sucker for sci-fi, and though Neptune’s Tears had many enjoyable scenes, my biggest qualm was that the novel was so short. There was an intense amount of plot crammed into a brief novel, and I felt as if the backstory of how Zee’s Earth evolved, and Zee and David’s relationship could have been drawn out more. David’s final reveal happens in the very last pages of the book, which leaves the reader on a doozy of a cliffhanger, and unfortunately, is somewhat predictable.

I appreciated the author’s use of technology; it’s familiar in a way that doesn’t seem completely foreign and is easily accessible. Zee, though she has more agency than some other female protagonists out there, Zee falls a bit into the pining-for-her-boyfriend trope a little too much for my liking.

Neptune’s Tears is a fast read, and is a good start for readers who want to dip their toes into YA sci-fi without becoming overwhelmed.

This would be fun to see on the big screen. The world of Tomorrowland in the film of the same name is how I pictured Zee’s Earth. There are aspects that haven’t changed too much (like London Tube), but other things, like mail sticks (how Zee checks her email) that are similar to the bright and shiny world that is portrayed in Tomorrowland. It would also be aesthetically pleasing to have the scenes where Zee is creating the bridges during her empath sessions to visually play out.

Georgie Henley, known for playing Lucy in The Chronicles of Narnia films, would be a good fit for Zee. She has the acting chops to play innocent and serious, but could bring a light-hearted sensibility to the role. Kodi Smit-McPhee (in my opinion), is David, through and through. His roles in Let Me In and Slow West have proved that he can play characters with deep emotional connections to their romantic counterparts, and he definitely fits the physical description of David.

how  ardently I love and admire you.”

Our romance-themed entertainment site is on a mission to help you find the best period dramas, romance movies, TV shows, and books. Other topics include Jane Austen, Classic Hollywood, TV Couples, Fairy Tales, Romantic Living, Romanticism, and more. We’re damsels not in distress fighting for the all-new optimistic Romantic Revolution. Join us and subscribe. For more information, see our About, Old-Fashioned Romance 101, Modern Romanticism 101, and Romantic Living 101.
Pin this article to read later! And make sure to follow us on Pinterest.
By Clarissa Hadge on August 10th, 2015