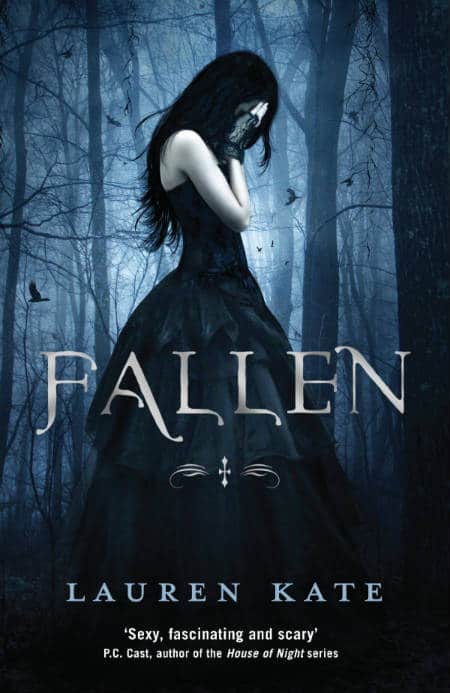 THE BOOK: Fallen (Book 1 in the Fallen series)

Lucinda Pierce, or Luce, has been tormented by nameless shadows all her life. After she is thrown under suspicion, when her boyfriend dies in a mysterious fire, she is sent to reform school. Her life looks bleak, till she meets the aloof and enigmatic Daniel. A boy who brings about a fierce longing in Luce and the unshakable feeling that they have met before.

Questions only lead to more questions, as Luce realizes her love story transcends this world, time and mortality. Fated to remain star crossed lovers for eternity, can Luce find a way out of this never ending cycle in this life?

I picked up this book because of its gorgeous cover and just as the cover seemed to promise, this love story did not disappoint. From the first moment that Luce lays eyes on the handsome brooding Daniel, she feels drawn towards him. Their undeniable connection is a heavenly feeling that is in complete contrast to the Gothic strange setting of a reform school.

RELATED Cruel Beauty Review: A Dark, Romantic Retelling of Beauty and the Beast

The book does have some short comings. A number of characters are introduced without the reader getting a chance to get really invested in their fates. Because of this, at times the story felt rushed and didn’t leave as much impact as it possibly could have. However, I was sufficiently intrigued by the characters of Daniel, who was definitely trying to protect Luce by staying away from her, and Cam, the attractive bad boy who openly wants to get closer to Luce.

The name of the book is a giveaway, but when it is revealed that there are Fallen Angels, it is still sufficiently unpredictable. The world Lauren creates is rich with references to heaven, angels and evil. There is inspiration drawn from Paradise Lost and the myth of  Fallen angels. These angels lost favor and were cast out of heaven. For any ardent reader of this fantasy genre, Fallen will be a perfect read.

Luce may not remember the details, but she has loved Daniel forever, and their love has been doomed until now. Something has changed, and there is a possibility of breaking the cycle and finally finding a chance at happiness.

The ending of the book is darkly exciting and magical. Though a number of secrets that baffled Luce are revealed, it only leads to more unanswered questions. Luckily for the readers, all the books in the series are published and one can quickly grab the next book in the series to unravel the mystery of Luce and Daniel’s tale of forbidden love.

Fallen is already being adapted into a movie directed by Scott Ritts and  set to release in 2015. Jeremy Irvine, Addison Timlin, and Harrison Gilbert will play the roles of Daniel, Luce and Cam.

Our romance-themed entertainment site is on a mission to help you find the best period dramas, romance movies, TV shows, and books. Other topics include Jane Austen, Classic Hollywood, TV Couples, Fairy Tales, Romantic Living, Romanticism, and more. We’re damsels not in distress fighting for the all-new optimistic Romantic Revolution. Join us and subscribe. For more information, see our About, Old-Fashioned Romance 101, Modern Romanticism 101, and Romantic Living 101.
Pin this article to read later! And make sure to follow us on Pinterest.
By Rhea Sinha on June 30th, 2015