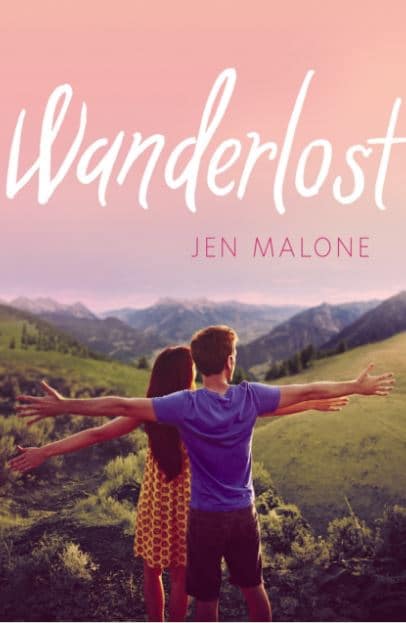 In Wanderlost, Aubree has always been perfectly content in the suburbs of Ohio. She’s ready to start college but isn’t quite sure what her future has in store. Elizabeth, on the other hand, has her entire future planned, with spreadsheets and power point presentations to match! Aubree wants to get out of the shadow of her sister, but when she has a graduation party and is busted by the police, things get out of control fast. Elizabeth takes the fall for the party, and unfortunately, is arrested.

With no other option, the sisters make a mad-cap plan for Aubree to take Elizabeth’s place in Europe as a tour guide for the summer.

Elizabeth’s fall internship with a local politician is riding on a good recommendation from the head of the tour company, and Aubree begrudgingly agrees to take over the tour for Elizabeth. Aubree tells her parents that she’ll be in Maine for the summer as a camp counselor with her friend Madison, but instead jet-sets to Europe. Before she leaves, she overhears a phone conversation where Elizabeth essentially claims that she has little faith that Aubree will be able to handle the tour. Already nervous, with Elizabeth’s fate — and doubt — in her hands, Aubree is unsure if she really will pull off this task. The sisters quarrel and Aubree leaves America, angry at Elizabeth.

When Aubree takes a sleeping pill on the flight and oversleeps, forgetting both her cell phone and a detailed binder with the trip details in it on the plane, things get off to a rocky start. But Aubree is unwilling to call her sister for help, knowing Elizabeth will have an “I told you so” attitude. Aubree forges on, managing to get to the first hotel on the tour. Her tour group has a lively cast of characters, including Hank and Maisy, a couple who seem to pretend they’re on their second honeymoon and are acting like teenagers; Emma and Mary, two ladies who have been best friends their entire lives; Mr. Fenton, a former school teacher who Aubree is worried will see through her facade, and Dolores, who is the mother of the tour company’s owner.

With the pressure on, Dolores’s appearance on the tour surprises Aubree, who knows if she slips up even a little, Dolores could end everything for Elizabeth. The tour company calls to check in on Aubree during the first day, and she talks to Sam — who puts her at ease, and is a bit flirtatious. But Aubree knows that Sam thinks she’s actually Elizabeth and tries to shove her feelings aside, to keep the secret safe.

As the tour begins, and Aubree is making things up as she goes, she thinks that she might be able to pull this scheme off. But things are never, ever, as simple as they seem, and Aubree is in for the adventure of her life!

This is the perfect book for the summer!

The overall tone of Wanderlost never gets too heavy, and keeps a lighthearted pace, as Aubree leads the senior citizens around Europe. As someone who has traveled with a senior citizen in Europe, I can say from first-hand experience, it’s not an easy task, and Aubree does it with panache! Aubree’s narration describes the countries the tour visits with a wide-eyed naïveté that she recognizes, as she claims every city that they journey to as her new favorite. Readers who haven’t traveled to the places Aubree visits in the book will certainly want to!

RELATED POST: This is My Brain on Boys Review

At its core, the relationship between Aubree and Elizabeth hold the novel together, and they bicker and fight as any sisters do. With only four years between them, Aubree explains how since Elizabeth left for college, they had been growing more and more apart, which readers with siblings can relate to. Aubree’s personal journey in discovering who she is in a complete foreign circumstance and her path to finding out wants she wants in life — and not trying to fit a role that her sister would think she should fit into — keeps the story grounded. The girls don’t have an overly complicated relationship, but their personalities differ enough to create tension as the novel progresses.

Aubree and Sam’s relationship, on the other hand, is different in a way that could become predictable very fast, but instead of feeding into a trope, the story moves so that Aubree’s journey is front and center, and not whether she and Sam will end up together. With the first portion of their interactions happening over the phone, their dialogue works very well, and there are several scenes of the two of them that are very funny.

One of my favorite parts of the novel is when the group gets to Austria, and Aubree puts together a Sound of Music-themed portion of the tour, her love for the movie spilling into her role as tour guide. I was obsessed with this film when I was younger, (and maybe still am, a little!) and I would gladly hop on a tour when I could sing along and see the sights from this classic!

Wanderlost is perfect for the big screen, with the different locations the tour visits providing a great look at what Europe has to offer a group of senior citizens! The book has a similar tone to Sisterhood of the Traveling Pants and could film in a similar manner.

For Aubree, I’d cast Mia Serafino from TV’s Crowded. Her character, Stella, has a very nonchalant attitude towards her future, which she could channel into Aubree’s hesitation here. For Elizabeth, Riley Keough (Mad Max: Fury Road, The Runaways) would fit the part, bringing Elizabeth’s serious, older sister nature to life. Lastly, for Sam, who has an easy-going nature but also makes Aubree question what she does want, Shane Harper (TV’s Good Luck Charlie and Awkward.) could have a good repertoire with Mia’s Aubree!

Content warning: Some mention of teen drinking, and a couple on the tour who can’t keep their hands off each other — nothing overly sexual, or inappropriate.

What do you think about Wanderlost? Sound off below…

Our romance-themed entertainment site is on a mission to help you find the best period dramas, romance movies, TV shows, and books. Other topics include Jane Austen, Classic Hollywood, TV Couples, Fairy Tales, Romantic Living, Romanticism, and more. We’re damsels not in distress fighting for the all-new optimistic Romantic Revolution. Join us and subscribe. For more information, see our About, Old-Fashioned Romance 101, Modern Romanticism 101, and Romantic Living 101.
Pin this article to read later! And make sure to follow us on Pinterest.
By Clarissa Hadge on May 31st, 2016

2 thoughts on “YA Review: Wanderlost – A Whirlwind Tour of Past, Present, and Future”