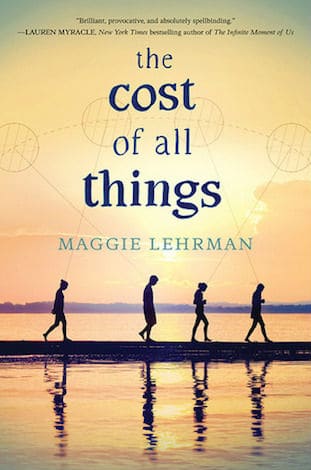 The Cost of All Things follows four friends: Ari, Kay, Markos, and Win. The narration switches between their points of view in both the present and in the past. These friends are reeling from the death of Win, who passed tragically in a car accident. The characters all have secrets, things that they don’t reveal to each other, and things that they would rather forget.

Ari was Win’s girlfriend, Kay is one of her best friends, and Markos was Win’s best friend. Ari was on track to go to New York to study dance and escape her quiet life on Cape Cod. Kay is part of a trio with Ari and Diana, and the three girls are inseparable until Win’s death, which is a catalyst to their friendship to start unreeling. Markos is dealing with Win’s death in a different way than Ari and is set on making her feel hurt in the same way that he is.

These friends have an advantage for dealing with their problems.

In their world, hekamists are healers that can mix up a spell for all sorts of things, but at a price and with certain consequences.

Ari’s parents died when she was young, and in her best interest, her aunt got her a spell to forget the night when they passed. Ari is contemplating getting another spell to forget about Win but knows that if she gets the spell, there might be dire effects that could potentially jeopardize her future.

Kay had a spell to make her more pretty and feels the backlash from her peers for doing so. She knows that Ari and Diana don’t quite understand why she took the spell, but even more, she doesn’t want to lose her friends. Kay makes the decision to ask the local hekamist for a spell to keep her friends nearby so that they can never truly leave her alone. Her decision will have consequences not just for her, but for Ari and Diana as well.

Win’s points of view are all flashbacks since he’s dead at the start of the story. He was struggling with depression, but kept it well hidden, even from Ari. He wanted to make Ari happy, and not have her worry about him, but his depression was deepening even before his death. Most of his story is his back-and-forth between getting a spell to battle his depression, or to try and find his own way.

Markos is like a loose cannon; in contrast to Win, who is reliable and steadfast, Markos’s life is a juggling act that threatens to come crashing down all around him, and that fall begins when Win dies. Markos’s home life is his complicated — he’s stealing money from his family’s hardware business — and knows that he could get caught any day. His pain in losing Win is coming out in violent outbursts that hurt only him; he ripped apart the treehouse he and Win played in as kids, but the community thinks that he will act out in even worse ways.

As the threads of the narration trace the events that lead up to Win’s death, and the aftermath, each of the characters find themselves isolated.

This is in part because of their own actions, but also due to the fact that everyone is casting spells that no one else knows about!

Kay’s spell to keep Ari and Diana close by affects her friends, and when Diana does try to leave (without knowing about Kay’s spell) and gets hurt, Kay wonders if her decision was worth it. SPOILER! When Ari, in so much pain from losing Win, makes the decision to take a spell to have her forget about him, she realizes that she has also lost the ability to dance. Her movements are clumsy, and she is in danger of never dancing in the same way again. Coupled with everything else, a secret about the night Ari’s parents died and the circumstances behind it, begins to rear its ugly head, making the situation infinitely more complicated.

The plot comes to a climax when the friends start to see the error in their ways, and that perhaps they can help support each other during their sadness over losing Win. In the end, the novel is a love story – there is the love that can come from romantic relationships, but also the love that friends can have for each other, and the love that people can have for things that make them happy. Ultimately, the decision is what to do with that love. Toss it away, or keep it?

Maggie Lehrman does a fantastic job with keeping each of the character voices distinct, which can be tricky. The emotional pull of how much Win loves Ari really solidifies why he ultimately makes his choice (which you will have to read the book to find out what that is!). The misery that Markos experiences and why he chooses to unleash his hurt in the way that he does will make the reader feel very empathetic towards him. Ari’s character has so many layers that peel back as her narration reveals her love of dance and the sorrow that she feels when she loses her ability to do so. When she questions how much she loved Win — and whether she loved dance more — it creates a great dichotomy. Kay’s choice to keep her friends close is a decision most readers will have had to face previously, or will have to face in the future. It is heart-wrenching to read about the lengths that Kay goes to, even after her friends have taken the spell.

The Cost of All Things is made for the big screen, since it’s a standalone novel, with the lovely Cape Cod as its geographic location. The characters have some intense moments, and choosing who to cast for each role has been my most difficult casting list to date!

For Ari, I’d cast Rowan Blanchard. She’s made waves as Riley on the TV series Girl Meets World, and I think she’d bring the emotional depth needed for Ari while giving the character a lighthearted side. Ki Hong Lee would work as Win. In both The Maze Runner series and on The Nine Lives of Chloe King, he’s played faceted characters, and with Win, he’d be able to pull off Win’s moments of doubt, as well as the tender moments that he and Ari share. Kay’s character fights over the course of the novel to be noticed, and Ariel Winter (most recognizable as Alex from Modern Family) would be able to command the screen to be noticed as Kay!

Though Diana doesn’t narrate the story directly, she has just as an important role as Ari and Kay, in their close-knit group of friends. Willow Shields (Primrose Everdeen from The Hunger Games series) would encapsulate Diana’s personality and show audiences that she can do more than play the shy Prim! Markos initially seems to fall into the “bad-boy” stereotype, but by the close of the novel, he’s redeemed himself and shown that he has more to him than most people assume. Tye Sheridan has played characters wrought with moral uncertainty; he’s great in Dark Places, The Stanford Prison Experiment, and Mud. With a character like Markos, he’d be able to play to both sides of moral ambiguity, and do it well!

Our romance-themed entertainment site is on a mission to help you find the best period dramas, romance movies, TV shows, and books. Other topics include Jane Austen, Classic Hollywood, TV Couples, Fairy Tales, Romantic Living, Romanticism, and more. We’re damsels not in distress fighting for the all-new optimistic Romantic Revolution. Join us and subscribe. For more information, see our About, Old-Fashioned Romance 101, Modern Romanticism 101, and Romantic Living 101.
Pin this article to read later! And make sure to follow us on Pinterest.
By Clarissa Hadge on September 29th, 2015