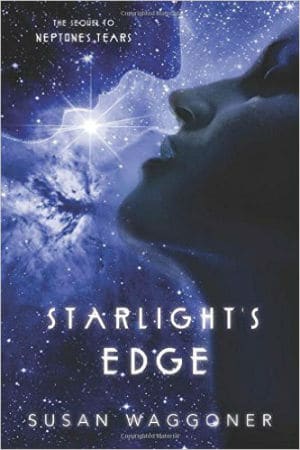 In Susan Waggoner’s Starlight’s Edge, the novel picks up from where  Zee and David were left at the end of Neptune’s Tears. Zee has made the decision to follow her heart and to time jump with David to his future on New Earth, 1,500 years forward in time. They leave the old Earth through a new technological transmission process that Zee has never encountered. David, having made the time jumps before, tries to calm her down, but the idea of having her cells disintegrate and reestablish “in a millennium and a half,” as David jokingly puts it, still makes Zee nervous. But she goes through with it, and takes the leap, into the starlight’s edge.

On New Earth, Zee’s senses are overwhelmed with new sights and sounds. Transportation has evolved with the technology, and Zee and David are able to travel from Iceland, where they’re deposited from the time jump to London, where David’s family lives, in about twenty minutes. Zee meets David’s parents and his sister, Fiona. Though she receives a moderately warm welcome from his father and Fiona, Zee feels right off the bat as if she doesn’t fulfill David’s mother’s expectations, which bothers her.

As Zee maneuvers in this new time period, she adjusts slowly to the technology that permeates everything — from figuring out how to use a teeth cleaning tablet instead of a toothbrush, and figuring out a “cube,” which houses everything that a smartphone, computer, holograph projections and more could do. David explains the cube is a necessary object for everyone on New Earth and shows Zee how to coordinate banking and purchases using it. The nanotechnology that is used on New Earth makes most of what Zee would have used in her old life obsolete, and Zee finds herself missing some of her now-outdated technologies.

David warns Zee not to trust the AI of the computers, since the computers have formed their own capabilities, making their motivations unsafe.

At a party thrown in honor of her and David’s return, Zee meets David’s older brother, Paul. The brothers have an “anything you can do, I can do better attitude” toward each other. What surprises Zee the most about meeting Paul is that she senses that he is not well; her training as an empath kicks in immediately when they meet though she can’t pinpoint his illness. David reassures her that most diseases have been eradicated on New Earth, but Zee is convinced that there is something wrong with Paul.

Paul announces that he’s undertaking a dangerous time jump to Pompeii. If he succeeds, he’ll return home a hero. Zee knows that David wants to take an equally daring time jump, but has agreed not to do so, as to not endanger himself now that she is with him on New Earth. Zee’s suspicions about Paul are further raised, when an accident at the party almost takes out Zee and David.

Still, Zee doesn’t regret taking the time jump with David, but she does long for some of the clarity of her old life. Her training as an empath doesn’t open many doors for her in the job market, and listless, she joins a support group for people who have time jumped from many different decades. These people discover that though the nanotechnology is efficient and can literally make anything anyone could ever want in a matter of moments, what people crave are the handmade things of the past. Food on New Earth is tasteless, but a man who was a chef in his time is able to create simple meals from scratch that put even the most decadent nano meals to shame.

As each person offers their individual skills — things like lacemaking, performing music, and playing tennis — they’re able to create a community, and spread these skills to the rest of New Earth.

However, Zee finds herself unable to offer anything more than her empath training, and distraught feels as if she hasn’t made any progress in her new life.

After overhearing a mysterious conversation with Paul, and another accident in a cab that targets Paul as the culprit, Zee weighs her options of telling David her concerns, or trying to figure out more information about Paul before leaping to conclusions. Two others are potential culprits. Mia, David’s time jump partner, whom Zee had interacted with before on the old Earth, has never given Zee much indication that she liked her. Previously, Zee had guessed that Mia had feelings for David, and when they all time jumped to New Earth, those suspicions were confirmed. David’s father also has reasons to knock Zee out of the picture — with Zee gone, David could fill his potential as a time jumper, without any reasons to take shorter, and therefore, less commendable jumps.

But Zee eventually turns a corner, after trusting her computer enough to ask for assistance in finding a role on New Earth, and decides that she is going to join the Time Fleet, and become a time jumper like David.

Zee’s life has order again, and she is more happy than she has been since her arrival.

She is able to do more of her empath training, moving toward divining, as she had been in her previous life.

Zee’s happiness is short-lived, after a third accident during an eagling expedition for Paul’s going away party almost kills both Zee and David. Eagling, a cross between skydiving and hang gliding is an adrenaline rush for the citizens of New Earth. Zee puts on a brave face after it is clear the ropes to her chute were cut, so as to not raise suspicions. But as Zee reviews who had the chute last, she realizes that it passed through the hands of Paul, his father, and Mia and that any one of them could have cut the ropes.

When Paul leaves for his Pompeii mission, Zee receives a message shortly after from David relaying that something has gone horribly wrong and that he had to go after Paul. Zee time jumps to Pompeii to rescue the both of them. Fortunately for them, she does, because she manages to track David down, but not before realizing that Paul’s time jump was a trap for David.

SPOILER! Paul has been infected by a manipulative computer virus. In a twist of fate, Zee, by allowing herself to be empathic toward her computer and trusting its AI, discovers this, and relays this information to David. Zee was able to pinpoint Paul’s location and saw that he wasn’t in the same year as the two of them; the same time that Pompeii is set to explode.

David finds Paul and brings him back to the year that he and Zee were initially in, and as Pompeii is exploding around them, they time jump to New Earth. A cover story is made up as an excuse for the Time Fleet, but Zee’s true actions are lauded by David and his family.

Zee finally feels that she has found her place in this new world, and knows that no matter what, no matter on what version of Earth she is on, goodness will prevail.

I enjoyed Starlight’s Edge more than I did Neptune’s Tears, and a large part of that had to do with the world building. Zee’s Earth in Neptune’s Tears was accessible, but the world of New Earth here has an interesting juxtaposition of the future so far removed, but still with an immense longing for the past. Starlight’s Edge, even though it’s a sequel, could be read as a standalone. There were some sci-fi tropes — the world of New Earth is almost antiseptic in its overall feel — but Zee’s empathy helps the reader maneuver around this. The romance is toned down a bit less in this sequel since the stakes are different than in Neptune’s Tears. There are many tender moments between Zee and David that shine through this novel, and with the cliffhanger from the previous novel, it enticed me enough to read on about what would happen between them.

Zee’s stubbornness to find some manner in which to use her empath skills was a good way to allow her to keep that aspect from her previous life, while also giving her character more agency, which I appreciated.

My one concern is that the novel tied up a bit too neatly at the end: everyone lives! Little to no consequences! Yay! But all in all, that does sum up Zee’s outlook on her life; facing challenges with a full sense of positivity.

As I wrote in my previous review for Neptune’s Tears, I think Starlight’s Edge would translate well to the silver screen. Zee’s experience on New Earth with the stark reality of all the new technology she didn’t have in her previous life would be entertaining and relatable to watch. Since I cast Georgie Henley as Zee and Kodi Smit-McPhee as David before, now I would cast Grant Gustin (TV’s Barry Allen on The Flash and Arrow) as Paul. David and Paul are close in age, and Grant balances a seriousness, charisma, and humor as Barry that I think he could transpose into Paul’s character as well!

repressed. You must allow me to tell you how ardently

Our romance-themed entertainment site is on a mission to help you find the best period dramas, romance movies, TV shows, and books. Other topics include Jane Austen, Classic Hollywood, TV Couples, Fairy Tales, Romantic Living, Romanticism, and more. We’re damsels not in distress fighting for the all-new optimistic Romantic Revolution. Join us and subscribe. For more information, see our About, Old-Fashioned Romance 101, Modern Romanticism 101, and Romantic Living 101.
Pin this article to read later! And make sure to follow us on Pinterest.
By Clarissa Hadge on August 20th, 2015