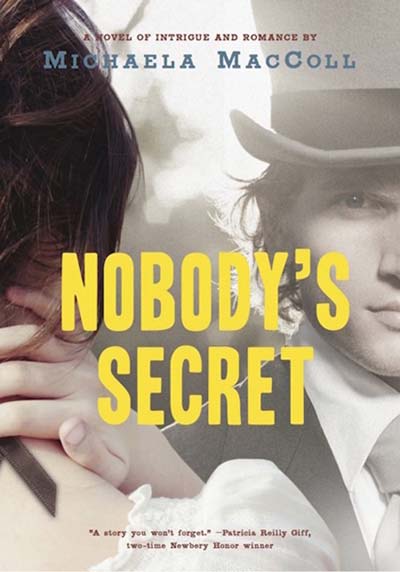 Emily Dickinson is a well-known poet and has had every aspect of her quiet life chronicled in print and sprinkled throughout pop culture. In Nobody’s Secret, Michaela MacColl uses Emily Dickinson’s “I’m Nobody! Who are you?” poem as the basis for an intriguing plot that follows a fifteen-year-old Emily as she discovers a mystery in her town of Amherst.

Emily is plagued by monotony; all she does day in and day out are chores, that is when she isn’t writing in her secret notebooks. With a worrisome mother and an absent father, Emily’s one companion is her sister, Vinnie.

When Emily Dickinson meets a handsome stranger in the field outside of her home, she wonders if maybe her boring life will take an exciting turn.

The two exchange a few words, with a mild flirtation between them. Knowing almost everyone in town, Emily inquires about who the young man is. He tells her that he is nobody important and asks her the same. Emily, relieved that he is unaware of her family, and feeling mischievous, she responds in a similar manner. Calling each other Mr. Nobody and Miss Nobody, the two talk for a bit, but then Mr. Nobody leaves, saying that he has matters to attend to. Emily notes a few things about his personage – that his hands are calloused, which is paradoxical to his fine clothes, and that though he claims to be nobody important, his handkerchief has the initials J.W. embroidered on it.

Emily Dickinson keeps the interaction with Mr. Nobody to herself though Vinnie wonders where she was all day. Using any excuse to get out of the house, Emily agrees to take one of their family’s horses to get re-shoed the next day. The errand happens to give Emily chance encounter with Mr. Nobody, and they decide to meet again the day after so that Emily can show him around Amherst. Emily’s plans, unfortunately, are derailed when a man is found dead in the pond on her family’s property.

Can Two Keep a Secret If One of Them is Dead?

No one in town seems to know the stranger’s identity, and as such, his body is kept in the church until someone can claim him. Emily takes it upon herself to see who this person is, and has the shock of her life when she discovers that it is Mr. Nobody. Frustrated that she never found out his real name, she decides to figure out his name and real identity. With only a few clues to go on, she begins her search with the help of Vinnie. They uncover secrets — both about Mr. Nobody, and their neighbors; people they interact with every day. As the sisters’ investigation takes a dark turn, they find that someone might be on their trail and that they might suffer the same fate as Mr. Nobody if they pry too deeply.

Nobody’s Secret is a fun mystery, with twists and turns that kept me wanting more. As with The Revelation of Louisa May, MacColl strikes a good balance between historical fiction and romance and stays true to the real life persona of Emily Dickinson. For a short novel, the plot moves quickly, and my only objection is that there are quite a few characters of which to keep track. With a sensational ending (one that I didn’t see coming!), Nobody’s Secret is a great book to curl up with on a rainy day.

The setting of 19th century Amherst would look gorgeous on the big screen since the atmosphere itself could be considered a character in this novel. As I was reading Nobody’s Secret, I pictured the beautiful landscape shots in the 1994 film adaptation of Little Women. If done in a similar manner, Nobody’s Secret would be brought to life in a film!

As Emily Dickinson, I would cast Emily Browning, known for her roles in Lemony Snicket’s A Series of Unfortunate Events and Sucker Punch. Though she’s a bit older than Emily’s teenage fifteen, she could carry Dickinson’s quiet reserve of strength, and her tenacity as she searches for the answers about Mr. Nobody! Austin Butler (Switched at Birth, The Carrie Diaries) fits the physical description of Mr. Nobody, with all of the wit and charm the character has! Vinnie has an important role next to Emily, watching her sister’s back as they dive into the secrets of Amherst, and Sabrina Carpenter (TV’s Girl Meets World) has shown that she can play a memorable gal-pal sidekick!

You can buy this on Amazon!

Will you be checking out “Nobody’s Secret?” Who would you cast as a young Emily Dickinson?

Our romance-themed entertainment site is on a mission to help you find the best period dramas, romance movies, TV shows, and books. Other topics include Jane Austen, Classic Hollywood, TV Couples, Fairy Tales, Romantic Living, Romanticism, and more. We’re damsels not in distress fighting for the all-new optimistic Romantic Revolution. Join us and subscribe. For more information, see our About, Old-Fashioned Romance 101, Modern Romanticism 101, and Romantic Living 101.
Pin this article to read later! And make sure to follow us on Pinterest.
By Clarissa Hadge on November 11th, 2015