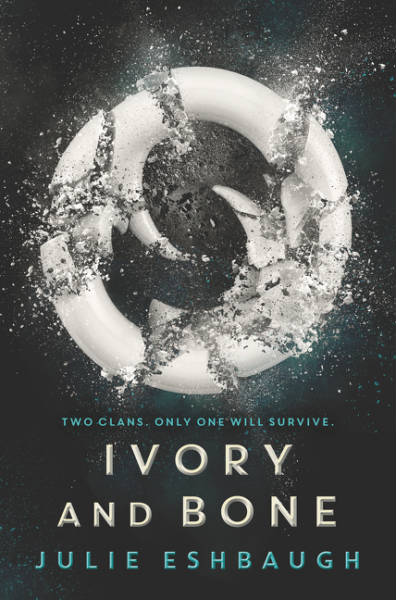 As a rule, I’m not a big Janeite. (Apologies to other contributors on this site!) I read her in college, and appreciated what she has done for the canon of literature and for women writers, but still, feel like there’s always some joke occurring that I’m not quite in on. (Also, apologies to my former professors!) When I picked up Ivory and Bone, and it was pitched to me as a prehistoric gender-swapped Pride and Prejudice, it was the prehistoric part that interested me the most. For readers seeking a retelling of Pride and Prejudice, this could be a disappointment. But if readers take this novel as a unique story with hints of Austen, then they will have an enjoyable time! (Seriously, who doesn’t love mammoths, though?)

Ivory and Bone is narrated by Kol, a teenager who is set to take over the leadership of his tribe, the Manu. But Kol is uncertain — he lacks the hunting skills that his younger brother Pek has, and with a shortage of girls in their tribe, the future of the Manu is at stake. When another tribe, the Olen clan, come to visit with their High Elder Chev, and his two sisters Mya and Seeri, Kol thinks that his future might not be as foreboding. A hunt with the visitors, however, turns into a mild disaster when Kol almost takes out Mya with a spear, and she kills a saber-tooth cat that was about to attack Kol. Mya, already contemptuous of Kol and his family, is downright disdainful after the near-accident.

Kol tries to make it up to her, seeing a strength in Mya that he hasn’t seen in any other girl, but Mya wards off his attempts.

Kol eventually chalks her seeming rudeness up to her personality. (Readers will see the Austen connection *cough Mr. Darcy cough* very much in Mya’s character.) Pek is no help to Kol, as he instantaneously is attracted to Mya’s sister Seeri and is distracted. But Kol is stubborn and wants to know why Mya is so cold towards him. Eventually, Mya reveals that there was a true accident on another hunt with the two clans, five years prior. The hunt that Mya and Kol were on eerily mirrored that one, and Mya does not trust Kol’s clan, and especially not Kol himself. It is also mentioned that Seeri is already spoken for, and Kol knows that this news will affect his brother deeply. Eventually, Mya and her siblings leave, with an uneasiness between the two clans. But Pek has his heart set on Seeri and, since a match between Kol and Mya is very unlikely, Pek decides to follow the Manu clan to see if maybe Seeri and her brother could be dissuaded from Seeri’s previous match.

Unfortunately, days pass with no news that Pek has found the Manu, and Kol goes after him. On his way, he is attacked by another saber-tooth cat, but this time, he manages to kill it. He is wounded, and taken in by the Manu, whom Pek did manage to find. While Kol is taken care of by the Manu, he thinks that perhaps Mya will show some sympathy for him, but she shows little concern, and Kol finally decides that she is not worth worrying over. But when the two clans reunite and a kayak accident with another of Kol’s brothers and Mya’s sister takes place, and Mya shows gratefulness towards Kol, his feelings are jumbled. With the arrival of another clan, the Bosha, and a girl named Lo who shows more friendliness to Kol than Mya has, it further complicates matters. Mya becomes even more closed off to Kol, but she does tell him that Lo should not be trusted.

As the bad blood swirls between the three clans, and Kol is caught up simultaneously in the events of past and the events of the present, will he be able to realize his feelings, and discover what the truth is before violence happens again?

Setting plays a large role in Ivory and Bone, as the clans traverse a varied and harsh landscape. It’s fun to imagine how the terrain was thousands of years ago, as humans were making their homes without technology and the modern-day conveniences we have today. There are several scenes of action, along with the animal attacks and hunts, and it helps to keep the pace of the story. This certainly is not the Regency Era and is the biggest divergence from Austen! Julie Eshbaugh does keep the essence of Austen civility in the dialogue of the story, and in Kol’s thoughts, giving the characters more depth. Though this could be distracting at times, this may have had to do more with my preconceived understanding of prehistoric people and their societies versus the quality of the writing. Overall, this is an intriguing, page-turning novel, and I’ll be interested to see what else Julie has in store for readers! More Kol and Mya (and mammoths!) please!

Ivory and Bone could only be displayed on the big screen! There is action and a lot of opportunity for landscape shots that would look great in theaters! For Kol, I’d cast Booboo Stewart (The Twilight Saga, Disney’s Descendants), who could portray the quiet temperament and the stubbornness that the character carries. For Mya, I’d cast Q’orianka Kilcher (The New World, Princess Kaiulani) who has shown that she can play resilient and tough, and not back down when things get difficult, which is definitely how Mya is!

Our romance-themed entertainment site is on a mission to help you find the best period dramas, romance movies, TV shows, and books. Other topics include Jane Austen, Classic Hollywood, TV Couples, Fairy Tales, Romantic Living, Romanticism, and more. We’re damsels not in distress fighting for the all-new optimistic Romantic Revolution. Join us and subscribe. For more information, see our About, Old-Fashioned Romance 101, Modern Romanticism 101, and Romantic Living 101.
Pin this article to read later! And make sure to follow us on Pinterest.
By Clarissa Hadge on June 27th, 2016