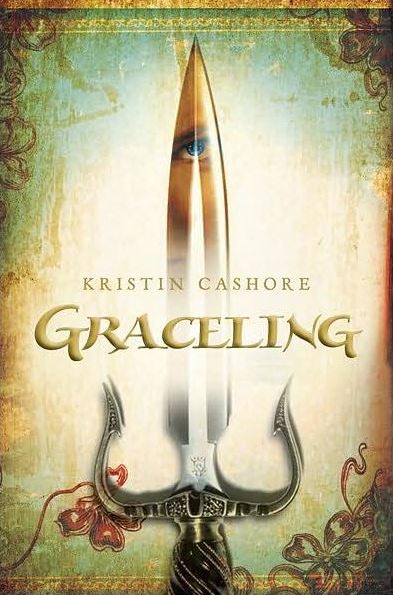 Graceling is a marvelous addition to the YA Fantasy genre. It’s both the first novel by Kristin Cashore and the first of three set in this world. While I have only read this one book, I have been told that the other novels (Fire  and Bitterblue) can stand alone though things make more sense if you start here. The beginning is, after all, a very good place to start.

The series takes place in a magical land with Seven Kingdoms- Monsea, Lienid, Wester, Sunder, Nander, Estill, and Middluns. While Lienid is an island kingdom and Monsea is on the other side of the mountains and by the sea, the other five kingdoms are much closer together. Middluns is in the middle while the others are in their logical geographical location (north, south, east and west of Middluns).

Although sometimes the kings work well together and are just, at the time of our story only the kings of Lienid and Monsea are seen as competent rulers; the others are bullies who fight each other. And, of course, there are characters in this world who are not what they seem.

In this world, you see, some people are born with different color eyes. This signifies that they will be extraordinarily gifted in some way and as such are both feared and seen as the property of their king (if they are deemed useful). Basically, those who are Graced to detect lies or fight are kept in the Capital, while those Graced with swimming are sent home. The exception to this rule is in Lienid, where all the Graced ones are respected and honored.

Our heroine, Katsa, is the niece of the King of Middluns, King Randa. Katsa is not only Graced, but she has the Grace of Killing, making her more effective than anyone at causing pain and ending lives. Often, she is sent out to do her Uncle’s dirty work, thinking of herself at times as no more than her uncle’s thug.

Despite this, and partially because of it, she rebels. Not in an obvious way, but she and her cousin, Prince Raffin, feel that there must be some good they can do with their positions of relative power. As a result, they work with other citizens, both noble and not noble, to form a council that spans across the seven kingdoms. The Council, as they call themselves, works with this network,  spying on the corrupt and saving the innocent.

At the beginning of the novel, Katsa is sent by the Council to free from prison the father of the King of Lienid. The kidnapping confuses everyone, because although Lienid and Monsea interact with each other, King Leck of Monsea is married to King Ror of Lienid’s sister and the two tend to not interact with the other kingdoms.

This is also bad because not only has a member of a royal family been kidnapped, but Lienid is a nation that no one wants to fight. The people of Lienid are a hardy breed that honors their Graced, including their youngest Prince Po who is graced with Fighting.

To avoid a conflict on a larger scale, Katsa goes to free the Lienid noble and runs into another Lienid, Prince Po, who can almost beat her in combat, something she has not experienced in a long time. Prince Po, who has been searching for his grandfather, ends up in Middluns where he joins with the Council and begins training with Katsa. She and Po discover that they can learn from each other, both in combat and in unraveling who captured Grandfather and why.

As the story progresses, Katsa continues to struggle with her role in Randa’s court. Is she really no more than a Graced thug, or is she destined for more? As she interacts with Po and Grandfather, she begins to question both her life and the truth about what is happening in the Seven Kingdoms.

As they begin to question things, learn about each other and learn about themselves, Katsa and Po set out on a journey to save the kingdoms and their selves. Not everyone is as they seem and not everyone’s Grace is what it seems either. Some people who do not seem to be Graced are, and this knowledge is slowly revealed as the book unfolds. The love story is also very sweet and gradual, taking two characters who do not easily trust and, through their relationship, learning to trust each other (although this is more of a problem faced by Katsa).

I know this is a little low on the description, but I am trying really hard to not spoil this one; I feel like everyone should read it. The plot unfolds in such a way that too much information will spoil the surprises. If you liked “The Hunger Games,” “The Lunar Chronicles,” “Divergent,” or any of the books written by Tamora Pierce, you’ll probably love this one too.

Graceling does a wonderful job of introducing readers to a new world that is captivating, exciting and not without risks. As with so many other new authors, Cashore is not afraid to kill or maim main characters. Her characters all take risks that may not pay off; they are not given a free pass for any reason. Even the characters that appear to win in the end go through severe heartache and no one survives unscathed. This helps the story feel more real, and lets me, as a reader, become more emotionally invested. There are real stakes and real dangers for our heroes, and I love that.

I would love to see this as a film. I feel like in the current movie climate this would fit in well with the crowds drawn to “The Hunger Games” and “Divergent.” The landscape seems like it would translate very well to film, and I think the characters would translate well too.  The only thing I could see as a problem is the fact that the story is told in Katsa’s head, so I would be concerned to see that translate well. On the other hand, it worked in “The Hunger Games.” Overall, the story is engaging and would be an amazing movie; or say, series of movies? Apparently Hollywood agrees with me because Graceling and the two other books that take place in this world are in pre-production. Hooray!

Our romance-themed entertainment site is on a mission to help you find the best period dramas, romance movies, TV shows, and books. Other topics include Jane Austen, Classic Hollywood, TV Couples, Fairy Tales, Romantic Living, Romanticism, and more. We’re damsels not in distress fighting for the all-new optimistic Romantic Revolution. Join us and subscribe. For more information, see our About, Old-Fashioned Romance 101, Modern Romanticism 101, and Romantic Living 101.
Pin this article to read later! And make sure to follow us on Pinterest.
By Bailey Cavender on September 2nd, 2015

2 thoughts on “YA Fantasy Review: Graceling”