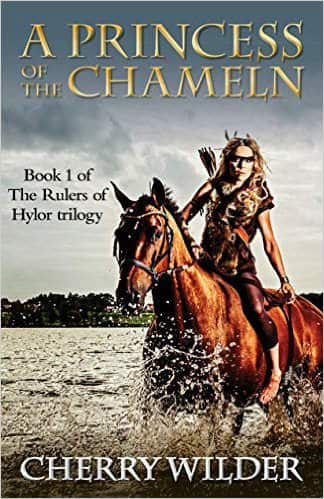 A PRINCESS OF THE CHAMELN BOOK REVIEW

At one point in Cherry Wilder’s A Princess of the Chameln, the main character Dan Racha Sabeth Aidris Am Firn (don’t worry you can call her Aidris) looks at herself in a mirror and “saw her own solemn face: high cheekbones, short, crimped black hair, green eyes.” She’s already been described as looking similar to her father’s side of the family who are known for being “short, sturdy, dark-complexioned, dark-haired” with “broad faces, eyes brown or hazel or green, colors of the forest.” As you can see the woman on the cover of this book – who is presumably supposed to be our heroine – doesn’t quite match this description does she? The cover artist seems to have fallen into the old trope of the blonde heroine instead of going with the book description. Of course every reader has come across numerous books where, for a variety of reasons, the cover fails to match character descriptions. Sometimes it can be a bit disconcerting finding details in the book which are completely different from the expectations you get from the cover. That actually is a good parallel to describe how I sometimes felt about the plot of A Princess of the Chameln in general.

The story follows Aidris from a child to a young woman, one half of the future rulers of a land known as Chameln on the continent of Hylor. Traditionally one heir from each of the royal families reign together, and Aidris already knows the young boy who will grow up to be her co-ruler. Numerous intrigues reach her family, though. There are assassination attempts, conspiracies, and a far off unknown villain orchestrating a lot of their misfortune.  At last, Aidris is forced to flee into a neighboring country when her home is taken over. She spends several years in exile, posing as a kedran, a sort of female soldier or knight until it is time for her to reveal herself and return home with her supporters to fight for her right to rule.

The story spans several years, and this made me feel rather detached from the story at times. The book often outlines the eventful times in Aidris’ life, and then jumps forward several years to the next time. This may have been necessary to the plot, but I thought it weakened it. The huge cast of characters also contributed to my sense of disengagement. Of course a fantasy novel often requires a large number of characters with unusual names to keep track of, and this book is no exception, but it was handled poorly. It’s one of the greatest weaknesses in the story for me. Some authors have a knack for helping us keep tabs on most of the leading characters in a narrative, the trick involves making them memorable, or reminding us of who is who as we go along. We shouldn’t have to wonder if a character is important, and even if they disappear for awhile we shouldn’t be too lost when they reappear.

Having a handy glossary is also a big help, and A Princess of the Chameln could have done with one. There are too many people to try and remember. Some minor characters prove to be significant much later in the story, yet it’s easy to forget them. When Aidris meets up with some of these characters in later scenes and it’s supposed to be a dramatic reveal, I most often found myself wondering “Who’s that again?” The search function on my Kindle often proved useful in this case to go back to look, but honestly, sometimes I didn’t feel interested enough to bother.

It even dilutes the romance in the story. When Aidris unexpectedly meets someone she hasn’t seen for years and feels flustered and conscious around him and then later falls in love with him, I was quite baffled and found myself going back over the story again to see what warranted the romantic feelings because I didn’t remember anything that hinted at it. I never found anything that showed me why I should care about the relationship at all and nothing much invested me in it as the story went on.

At the same time, characters who I did want to find out more about often disappeared for years and only got a mention now and then or never appeared again. Since this book is the first in a series, I assume that there will be more detail later to flesh out characters who we know very little about. Several plot lines will hopefully get some more attention as well. For instance, the villain orchestrating many of the evils in Aidris’ life doesn’t take the stage at all. We see a lot of the damage he does, but there is no direct confrontation with him though the characters do battle his minions. Only hearing about the villain and not seeing him lessened his impact. This and other thing aspects of the plot left it severely lacking.

I can say that Aidris is an appealing character and we are drawn into her story. Wondering what would become of her kept me reading, but at the same time, she’s not remarkable or very memorable.

When I picked up this book, I definitely expected to experience some familiar aspects of fantasy and I hoped as well to encounter something new and imaginative. My expectations were not fulfilled. There were some typical fantasy elements indeed, but they didn’t hold my interest.   I found myself struggling sometimes to continue following the story. Despite the fact that there is clearly more to the story of the rulers of Hylor, and there are many questions left unanswered, I don’t feel inclined to read any more books in this series to learn more.

This story could prove to be an interesting movie with some trimming of the plot and the character list. It would be one of the rare adaptations where I wouldn’t mind if changes were made to the story to make it more cohesive.

Some aspects of the culture of the Chameln and the appearance of some of the people suggests the culture of Amerindians and some other indigenous peoples. The author Cherry Wilder herself was born in New Zealand and used aspects of the Maori in her other books. I think this would be a great opportunity to cast a young actress and actors from these ethnic  groups as some of them would be similar to the descriptions  in the book. It would be a nice chance to incorporate some unusual diversity in a fantasy setting. Unfortunately, no particular actress came to my mind and some internet searches didn’t bring up anyone who I thought might work for the role. It might be an opportunity to cast someone entirely new. If anyone has any suggestions of indigenous actresses who fit the description of Aidris, I’d love to hear about them.

You can buy this book on AMAZON.

odious subjects as soon as I can.”

Our romance-themed entertainment site is on a mission to help you find the best period dramas, romance movies, TV shows, and books. Other topics include Jane Austen, Classic Hollywood, TV Couples, Fairy Tales, Romantic Living, Romanticism, and more. We’re damsels not in distress fighting for the all-new optimistic Romantic Revolution. Join us and subscribe. For more information, see our About, Old-Fashioned Romance 101, Modern Romanticism 101, and Romantic Living 101.
Pin this article to read later! And make sure to follow us on Pinterest.
By Dixie-Ann Belle on April 11th, 2016

1 thought on “YA Review: A Warning About Venturing Into the Land of Chameln”