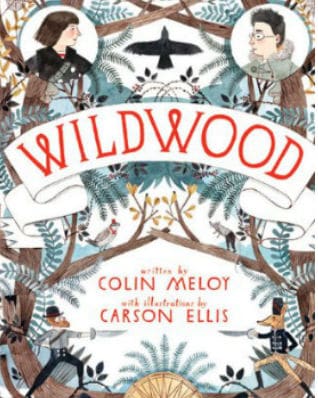 To be completely honest, sometimes I buy books because I like the cover. This is exactly what happened to me when I saw Wildwood.  The cover is gorgeous. I was on vacation, saw Wildwood in a bookstore, and I was immediately curious.Why was there a fox with a hat and a sword? And why was he fighting a red-headed man? Who were these two kids? When I read the back of the book, I was even more intrigued. Written by Colin Melot and illustrated by his wife Carson Ellis, Wildwood did not disappoint me once I read it.

As I was reading Wildwood, I was reminded of Labyrinth, and one of my students read the back and called it a “dark Narnia.” I liked that, and I think it fits the spirit of the book (you could argue that the tone is a little like The Last Battle, I suppose). The story takes advantage of the fact that it’s a fairy tale, but it also takes itself seriously. The actions of the characters have consequences, and no one is actually safe.

Prue McKeel’s baby brother Mac is kidnapped by crows. Determined to save him, she and her friend Curtis track the birds to the Impassable Wilderness, right outside of their home city of Portland. While there, they learn that the Wilderness is not a peaceful place. After they lose each other, Prue and Curtis meet many strange, wonderful, and frightening characters, find themselves in several battles and learn that they might have family ties to this strange world. Will they ever find each other again? Can they save Mac? Will the Wilderness ever be at peace? And what secrets are Prue and Curtis’ parents hiding?

When you’re reading Wildwood, it has the talking animals, and deals with the fight of good versus evil, like fairy tales do. But one of the things I loved about it is that there are also characters who are very gray. Are the coyotes really all bad? What about the bandits? Almost no characters are truly selfless. Even the most lovable characters are just trying to do their best and sometimes failing. I think this makes them better and more lovable.

Prue is a heroine who is just trying to save her brother. Although she cares about the Wood and the people there, she never loses sight of her real reason to be in the Wilderness. Prue’s priority is Mac. As it turns out, she and her new friends have a common cause, to save Mac. They have different reasons for this, but they work together. Prue is a smart and tough little girl, but the author makes sure the readers know that she is just a little girl and one who has found herself tossed into circumstances beyond her control. Her focus on saving her brother seems to be the thing that helps her keep it all together.

Curtis is a different character than Prue. He pushes his way into the story and at first, the reader is just as annoyed at him as Prue is. But then, Curtis begins to grow on you. From his time with the coyotes to his time with the bandits, Curtis comes into his own as a character. His growth throughout the story is great fun to watch, and I found myself really enjoying following Curtis’s story. I wanted to know what happened to him. I do have some questions about his background, but I suppose I shall have to read the other books for that!

The supporting characters are also wonderful. The citizens of the Wilderness are all unique, which makes reading about them much more enjoyable. I don’t want to tell you too much about them since too much information might ruin the surprises. Each set of characters unfolds in a different way, keeping the reader guessing as the novel moves forward. I thought this was a great touch. Some of my favorites supporting characters include the Governess Alexandra, Brendan the Bandit King, Septimus the Rat, Mystic Iphigenia, Sterling the Fox, Owl Rex, Richard the Mailman, and Dmitri the Coyote.

Wildwood is a fairy tale that takes the reader seriously, inviting us into this world that is not so far from our own. It invites us to take the Wilderness, its problems, and its people, seriously. Since the book was a bestseller and has two sequels, I think it succeeds. If you like fairy tales, talking animals, epic battles, gray characters, strong female characters, solid character growth, stories written about the Pacific Northwest by people who are from the Pacific Northwest, Labyrinth, The Chronicles of Narnia, or stories about the power of love between siblings, you should definitely give Wildwood a try.

In the spirit of full disclosure, I have not read the second and third books in the Wildwood series. However, this is exactly the kind of movie that I would love to see. As long as the author/illustrator team of Melot and Ellis are very involved in adapting their story into a movie, this could be magical. Personally, I would love to see Wildwood adapted as a cartoon. I think that this is exactly the kind of story that animation was made for. Dreamworks or Disney/Pixar would be able to make the lush setting come alive while keeping true to the spirit of the story. With so many talking animals in clothes, animation is ideal.

For casting, I imagine Judi Dench as the voice of the Mystic Iphigenia, Ewan McGregor as Brendan the Bandit King, Kate Winslet as Alexandra, and Dick Van Dyke as Owl Rex. For Curtis, I imagine a voice like Ty Simpkins. He played a convincing child nerd in Jurassic World, and I think he could pull off the different parts of Curtis’s personality. He’s also not too old; he is a kid. Age was a big part of choosing my Prue as well. I like Skai Jackson for the role. She’s done quite a bit, from HBO’s Boardwalk Empire to Disney’s Jessie, so she has some range. And like Simpkins, she is a kid like Prue.

Our romance-themed entertainment site is on a mission to help you find the best period dramas, romance movies, TV shows, and books. Other topics include Jane Austen, Classic Hollywood, TV Couples, Fairy Tales, Romantic Living, Romanticism, and more. We’re damsels not in distress fighting for the all-new optimistic Romantic Revolution. Join us and subscribe. For more information, see our About, Old-Fashioned Romance 101, Modern Romanticism 101, and Romantic Living 101.
Pin this article to read later! And make sure to follow us on Pinterest.
By Bailey Cavender on February 24th, 2017