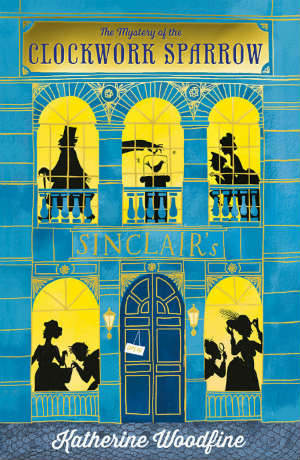 Do you like Mr Selfridge and The Paradise?  Do you like to read about young people having adventures and solving crimes?  Do the words “clockwork sparrow” intrigue you?  If so, this could be the book for you!

RELATED: I’m Glad I Did – A Historical Murder Mystery That Sings

Set in Edwardian London, The Mystery of the Clockwork Sparrow tells the story of Sophie Taylor, a 14-year-old girl who has fallen on hard times since the death of her military father, and has taken a job at Sinclair’s, a glamorous new department store about to open its doors for the first time.  There she meets Billy, a young porter who loves to read adventures stories, Lil, a fashion model and actress, and Joe, who is on the run from an East End gang. Together, they become an unlikely crime-fighting team when the store’s opening is marred by the theft of Mr Sinclair’s personal treasures, including the famous clockwork sparrow.  A man is shot, and Joe is the only witness to the crime.  Is this the work of the mysterious crime boss, The Baron?  What is the meaning of the message left at the scene of the crime?  And can Sophie, Lil and Billy solve the mystery without losing their jobs, or even their lives?

This is a charming book, made more charming by the fact that each section begins with an advertisement for a different sort of hat.  (Sophie works in the millinery department).  There are also newspaper cuttings and a copy of the note left at the crime scene, so you can solve the crime along with Sophie and her friends.  Its other charm is that it is chock-full of descriptions of Sinclair’s and the sumptuous beauty of its departments.  It makes you wish you could really shop there!

In Britain, this book is being marketed as middle-grade, but it’s perfectly enjoyable for YA and for adult readers.   It has a fast pace with plenty of twists and turns, and functions properly as a crime novel.  Even if older readers can work out most of the clues ahead of Sophie, there is still an element of the unexpected.  It is also clear that Sophie and Lil are the driving force of the team and the boys are their side-kicks.  They are adventurous heroines to be enjoyed.

The story ends with at least one mystery still unsolved, and the promise that Sophie and Lil will return in a new adventure, The Mystery of the Jewelled Moth.  If it lives up to the promise of the first one, the author will have a successful series on her hands.

Anyone who has watched Mr Selfridge will quickly become aware that Sinclair’s is heavily inspired by Selfridge’s (although the author says in her note that she drew inspiration from other historic department stores too).  For that reason, I found it impossible when reading not to picture Sinclair’s exactly as Selfridge’s looks in Mr Selfridge. Any adapter would have to work hard to make it look original.  Can TV stand another department store-based period drama?  Since this is a young people’s story, I think it could.  It might be something like a cross between Hetty Feather and House of Anubis.  But we would have to wait for more books to come out in the series, in order to have enough material for a continuing drama.

Our romance-themed entertainment site is on a mission to help you find the best period dramas, romance movies, TV shows, and books. Other topics include Jane Austen, Classic Hollywood, TV Couples, Fairy Tales, Romantic Living, Romanticism, and more. We’re damsels not in distress fighting for the all-new optimistic Romantic Revolution. Join us and subscribe. For more information, see our About, Old-Fashioned Romance 101, Modern Romanticism 101, and Romantic Living 101.
Pin this article to read later! And make sure to follow us on Pinterest.
By Elizabeth Hopkinson on July 9th, 2015