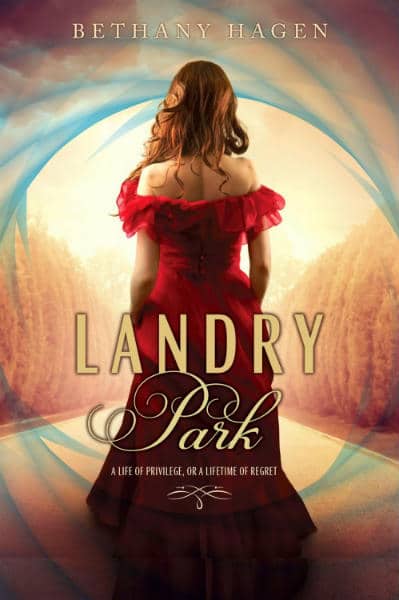 Because so many dystopian novels are compared to The Hunger Games, it can be tough for readers, and even authors, to separate the books within the genre, or to find themselves honestly assessing a book based on its attributes. Sometimes we do this even without realizing our subconscious is making comparisons. Historically, I’ve not found myself to be a part of the larger fan base of THG which is why I enjoy seeking out other dystopian themed stories. This book, Landry Park, was released last year and was a kind of part one to debut author Bethany Hagen’s “Landry Park” duology.

The story of Landry Park follows young Madeline Landry. Heir to her father’s estate, Madeleine is held to a higher standard than some of her gentry peers. Instead of pursuing her dreams of a scholarly life, as the only Landry child, she is expected to set aside her dreams in favor of protecting her father’s legacy. Her mother has hopes of making a prestigious match for her daughter though Madeline has very different ideas… until she meets David. There is something different about David Dana. The magnanimous connection between them cannot be denied, but it isn’t until Madeline discovers David secret that her world becomes anything but safe.

I’d be lying if I said I didn’t like this book. Despite the lukewarm ratings I’ve seen for this novel, this was a fantastic read. The sense of “journey” we go on with the heroine coupled with the struggle of duty was wonderful. The pitch for this book is “Gone with the Wind meets The Hunger Games,” which is a quote direct from the book as voiced in a review by VOYA. That description is accurate, but there are also mirror ideas from ITV favorite Downton Abbey or any number of refined British period dramas. This is all thanks to the opulent world Hagen crafted. Which leads me to the specifics of that world; it’s a beautiful one. This isn’t only because of the elegant balls or upscale parties that are hosted, this is also because of the writing. Bethany has a very sophisticated way of crafting Landry Park. The writing and craftsmanship are beautiful. I loved being invited into each of the polished ballrooms we experience not to mention Landry Park’s hallowed halls, which fall nothing short of the splendor of the highest regard.

The characters are also interesting though I wasn’t sure what to make of David Dana as a primary love interest. The connection he is meant to have with Madeline isn’t as fleshed out as I’d have imagined, especially given the more romantic “aura” this novel projects. That being said, as everything continued to progress, I did start to feel something for their romance. It isn’t a Romeo and Juliet type relationship in the sense of the proper canon (in fact, it’s more of a fiery, love-to-hate beginning), but there are some similarities. Then there is Madeline. I did really like her, mostly after she unearths a secret that puts her in a difficult position. I felt like her emotions were genuine; she had to decide where her place was and given how she’d been raised and with such comforts, her lack to dismiss that world was realistic.

If you enjoy young adult dystopian or period dramas, Landry Park might be worth a read. It’s an easy read and for once, ends in a satisfying manner though there are still hints of upheaval yet to come. What that all may be is likely revealed in Jubilee Manor which is now available.

This could be made into a fun, high class world on a network like CW but until then, those who enjoy Downton Abbey or anything similar to it might enjoy this unique story.

Have you read Landry Park? What’s your favorite YA dystopian? Comment down below with any thoughts!

*wavering between a 3 and 4 for this rating

Our romance-themed entertainment site is on a mission to help you find the best period dramas, romance movies, TV shows, and books. Other topics include Jane Austen, Classic Hollywood, TV Couples, Fairy Tales, Romantic Living, Romanticism, and more. We’re damsels not in distress fighting for the all-new optimistic Romantic Revolution. Join us and subscribe. For more information, see our About, Old-Fashioned Romance 101, Modern Romanticism 101, and Romantic Living 101.
Pin this article to read later! And make sure to follow us on Pinterest.
By Rissi JC on November 30th, 2015