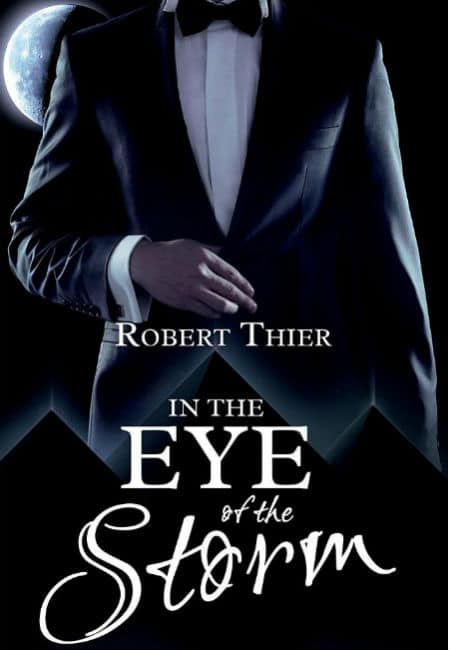 IN THE EYE OF THE STORM BOOK REVIEW

Starting right where Storm and Silence ended, In the Eye of the Storm follows the further adventures of plucky heroine Lilly Linton. When the story starts, young feminist and secretary-extraordinaire Lillian (Lilly) Linton has just survived a shipwreck returning from France with her employer, the enigmatic, brooding, and wealthy Mr. Rikkard Ambrose. With Mr. Ambrose not in the lifeboat, Lilly is concerned that he has been lost at sea.

When she finds Mr. Ambrose alive, Lilly is relieved, especially when it is clear that he is the same stone-faced, miserly, and brooding man that he has always been. He is also more determined than ever to convince Lilly to resign from her position as his secretary. Is this a result of the danger they are always finding themselves in, or is this because of her outburst for women’s rights, while dressed as his employee at a local feminist rally?

Since the series began, Mr. Ambrose has been trying to convince Lilly to quit because she is a woman working in a job that, at the time, was for men. In In the Eye of the Storm, Mr. Ambrose seems to be trying even harder to scare Lilly away from his offices. Not only does he require her to go with him to break up a violent strike, he tries to reduce her wages. He also informs Lilly that he needs her to go with him to Egypt to look into some trade matters, on a trip lasting a few months, or hand in her resignation.

Why does Mr. Ambrose need to go to Egypt? I don’t want to spoil it, but there are trade conflicts and bandits involved. It all ties back to events that we learned about in the first book.  Not one to be defeated by a challenge from anyone, particularly from Mr. Ambrose, Lilly cooks up an excuse for her family and is ready to go to Egypt. However, Mr. Ambrose is one step ahead of her, and, to maintain protection from his business rival, Lord Dalgliesh, has hatched a plan.

This plan, Lilly is shocked to find, involves the two of them traveling as a newly married couple, because it’s the last thing Lord Dalgliesh would expect of Mr. Ambrose. Following Lilly’s point of view, the reader sees her frustration at Mr. Ambrose’s heavy-handed behavior, her attraction to him that is continuing to grow, and the joy she takes in annoying him.

As the novel continues, Lilly and Mr. Ambrose hunt for leads and proof regarding who is hiring the bandits, struggle with their growing attraction to each other while pretending to be a newly married couple, face sandstorms, and encounter other issues while hunting for answers.

Interwoven in the adventures of Lilly and Mr. Ambrose is the dashing Captain Carter, who appeared as the only man Lilly didn’t hate when attending balls in Storm and Silence. In In the Eye of the Storm, Captain Carter is also in Egypt on official business and is constantly running into Lilly. What is he doing in Egypt? Is his interest in Lilly more than just friendly?

Will the bandits be stopped? Can Lilly find a way to balance her independence with her newfound feelings? Will Lilly and Mr. Ambrose ever talk about their feelings with each other? Okay, that last one would be very out-of-character for them both, but I can dream (I imagine it would be a very sarcastic and delightful conversation). Most of these questions will be answered in In the Eye of the Storm, and if not, enough information is given so you can form your own opinions.

In the Eye of the Storm is an excellent sequel, in that it builds on the characters and events of the first book without rehashing anything. I think this is why there are fewer interactions between Lilly and her family and friends in In Eye of the Storm than in Storm and Silence; that’s not the focus of this story. The fallout from Lilly and Mr. Ambrose’s trip to France at the end of the last book and the ball before they leave reminded me of the gap between Lilly and her family. These events, and the way Lilly covered up of her trip to Egypt, also reminded me of the ways that Lilly Linton is a different sort of heroine.

Lilly is still the same plucky, bright, and independent character, but with the events at the ending of the last book, she finds herself drawn more and more to Mr. Ambrose. This disturbs her, as she wants to be independent, and the fear that she may be developing feelings for a man (especially Mr. Ambrose) throws a bit of a monkey wrench into her plans for self-sufficiency. As the novel progresses, Lilly is still wrestling with the conflict of being a self-sufficient woman, in a time where women did not really have many options.

Mr. Ambrose still reminds me of a cross between James Bond, Mr. Rochester, and Sherlock Holmes. He is also still the same frugal, calculating character who seems to have a heart of stone. However, as the novel goes on, it starts to seem that he has a soft-spot for one Lilly Linton, the woman who both refuses to be bullied by him and is not afraid to challenge him if she thinks she is making a mistake. It’s a reluctant soft-spot, but it’s still there. At the end of the novel, there are two bonus chapters from the point of view of Mr. Ambrose that I don’t want to spoil, but are wonderful. Don’t skip them; they’re delightful looks into the mind of this fascinating character.

The romantic tension between our two leads is believable and fun and continues to build on the relationship established in the first novel.

The romantic tension between our two leads is believable and fun and continues to build on the relationship established in the first novel. Neither Lilly nor Mr. Ambrose wants to admit that they are starting to maybe, possibly, feel something for the other, but hide it in snarky arguments and heavy-handed attempts to keep the other safe. When they have to pretend to be married for safety, however, will they be able to deny their attraction for much longer?

In the Eye of the Storm will be available on Amazon as a Kindle book and in paperback on August 3rd, 2016. It’s a satisfying sequel that leads the way open to a third book in the series (actually, if there isn’t a third book, I’ll be very disappointed). These characters are a lot of fun, and the story picks up right at the end of Storm and Silence, giving the two stories a sense of flow.

Like I said about Storm and Silence, it’s like Bridget Jones meets James Bond, in the best possible way. If you enjoyed Storm and Silence and are a fan of plucky heroines, Byronic heroes, and adventure stories, you will probably enjoy In the Eye of the Storm. Just make sure you read this book after Storm and Silence.

Like with Storm and the Silence, In the Eye of the Storm could work wonderfully as a film, as long as Robert Thier is very much involved in the way the story is portrayed. As far as actors go, I see Tom Hiddleston as Rikkard Ambrose, with Chris Evans as Lord Dalgliesh. Even though Dagliesh isn’t technically in this book, his shadow looms over it, and a brief cameo would be perfect. For Captain Carter, Richard Madden fits both the description and my personal mental picture. I also see Betty White as Lilly’s “grandmother,” because I think she’s a wonderful actress who could pull off senile and deaf. And again, I pictured Amanda Fuller as Lilly. Since the book is written in Lilly’s point of view, and so much of the humor would come from her very distinctive voice, I would love to hear Lilly do voice-overs, ala Bridget Jones’ Diary for this film.

Our romance-themed entertainment site is on a mission to help you find the best period dramas, romance movies, TV shows, and books. Other topics include Jane Austen, Classic Hollywood, TV Couples, Fairy Tales, Romantic Living, Romanticism, and more. We’re damsels not in distress fighting for the all-new optimistic Romantic Revolution. Join us and subscribe. For more information, see our About, Old-Fashioned Romance 101, Modern Romanticism 101, and Romantic Living 101.
Pin this article to read later! And make sure to follow us on Pinterest.
By Bailey Cavender on June 22nd, 2016