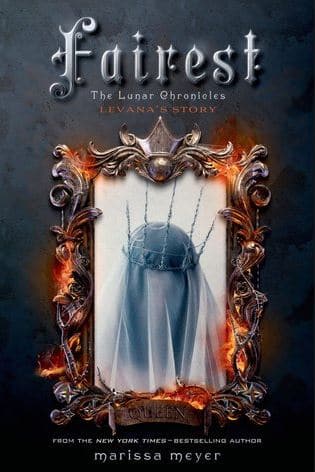 There is a trend in recent years to make the villains in our favorite fairy tales seem more human. In Once Upon A Time, the Evil Queen is one of my favorite characters. Similarly, films like Maleficent also play with the idea that, maybe, the villain didn’t start out that way, or perhaps things aren’t always what they seem.

In Fairest, the fourth book of the five in Marissa Meyer’s The Lunar Chronicles, Meyers does just that. Where Cinder, Scarlet, Cress and Winter all take place one after the other, Fairest is more of a prequel based on the evil queen in Snow White, but the part of the story when Snow is still a child.

RELATED: Behind the Fairy Tale-Maleficent

When reading the series in the order that it was published, I think it was a bit jarring. For me, I had been waiting to read what happened to these characters after the events of Cress, and Fairest doesn’t tell that story. It was also written in a different style than the other books in the series, and that makes sense because it’s written to serve a different purpose: give backstory.

Fairest introduces us to the young Princess Levana, who would later become the beloved and feared Queen in the rest of the series. As the story progresses, Levana grows from shy young princess to a queen determined to make her people love her, whatever the cost.

Levana falls in love with a handsome guard, Evret Hale, and when he is left a widower, she convinces him to marry her. Her sister, Queen Channary, laughs at Levana, telling her that love is not all it’s cracked up to be; that it’s war; a position that Levana argues against and fights until the end when she begins to wonder if her sister is right. Did Evret really love her, was he just under her spell, or did he just need a mother for his daughter? Levana both wrestles with and ignores these questions throughout the novel.

When Channary dies unexpectedly, leaving tiny toddler Princess Selene the new queen, Levana steps in to rule for her niece. Levana has known for a while that she would be a better queen than her sister was, and sees this as her chance to do some good, and raise her niece to be a good queen. Once Levana gains power and begins to feel the fear-induced love of her people, however, she becomes reluctant to hand over that power to someone else. This leads her to wonder if there is a way to remove little Princess Selene from the equation altogether.

Fairest, like the rest of the series, deals with important issues. These include the following: What makes a good ruler? What is true love? Where does duty come into play in influencing your actions? Does duty to family trump duty to country? (and vice versa) Can a group of people be blamed for the actions of few in that group? Is murder ever justified? Then there are the ethics of cloning, genetic modification and warfare, and the topics of rebellion and freedom.

RELATED: Cinder Book Review: Cinderella in the Future with Cyborgs

Although Fairest seems less important in the grand scheme of the series, it was still a great introduction to the relationship between Levana and her stepdaughter Winter. This is something that I assume will factor into Winter quite heavily. We also see glimpses of Levana’s relationship with and feelings toward her young niece Selene, while learning more about the circumstances that lead to Selene’s growing up on Earth as a cyborg, something that comes into play in Cinder.

If you are looking for a good jumping-off point to start the series, I would probably start with Cinder but read Fairest second, because Fairest provides important background information for the series. However, by reading Cinder first, you are already invested in the characters present and, therefore, care about the background. Reading Fairest first would spoil things for Cinder, but Cinder won’t spoil things for Fairest. It offers hints about Scarlet and Cress, but nothing too obvious.

I enjoyed several things about this book, and one of those things was learning about Levana’s past, particularly her childhood. Although in the other books Levana is not the best queen, from reading about her interactions with her sister and the way that Channary governed, it’s not hard to see Levana as a better option. It’s always weird to see the evil queen as the lesser of two evils, but that’s what Meyer does in this book.

Levana’s reluctance to hand over power to someone else can be seen as a reaction of someone who has been effectively powerless for years and now has a chance to do something. Also, the romance is more heartbreaking than romantic; you feel terribly sad for all the characters involved in those relationships. I may have cried at the ending of this book.

Is Levana still the villain? Of course, she is, but from reading her story, the series gains a more realistic and well-rounded antagonist. Yes, I realize that using the term “realistic” when writing about a magical queen who changes her appearance and rules a kingdom on the moon is a bit silly, but you get my meaning. She’s a tragic character in this book, especially when you compare the sweet Levana in the beginning of the book with the queen we see in Cinder.

Overall, it’s a fascinating story about a villain that has always seemed a bit more complicated anyway. Levana’s struggles and the way she gradually became the villain striving to take over the world(s) are laid out in a believable way.  Like with the other fairy-tale characters that Meyer has introduced us to in The Lunar Chronicles, there is more to Levana than meets the eye.

Like I’ve said about the other books in the series, this is definitely miniseries material, and like with the reading order, I would put Fairest between Cinder and Scarlet. Cinder pulls you into the world while Fairest gives background and answers questions from Cinder while also setting up the other three books. Scarlet’s grandmother is mentioned, as is Cress, though not by name, and Dr. Erland makes an appearance as well. It’s a great in-between story, and the miniseries format allows all this information to be kept in the story.

Of course, the special effects budget for this film, in particular, would be extensive, because of the constantly changing Glamours of the people of Luna. Plus, the setting itself is complex; it’s a kingdom on the moon. However, this is one series that I would love to see adapted correctly, it could be absolutely fantastic.

Have you read Fairest? Agree or disagree? When would you read it? Let me know in the comments!

Our romance-themed entertainment site is on a mission to help you find the best period dramas, romance movies, TV shows, and books. Other topics include Jane Austen, Classic Hollywood, TV Couples, Fairy Tales, Romantic Living, Romanticism, and more. We’re damsels not in distress fighting for the all-new optimistic Romantic Revolution. Join us and subscribe. For more information, see our About, Old-Fashioned Romance 101, Modern Romanticism 101, and Romantic Living 101.
Pin this article to read later! And make sure to follow us on Pinterest.
By Bailey Cavender on December 19th, 2015