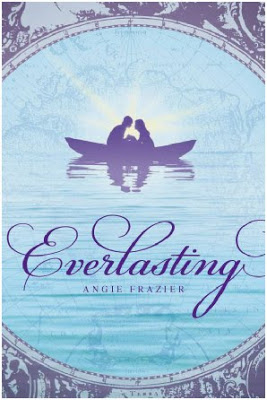 “Life just changes. Like a story headwind, Camille thought. First blowing the sails in one direction and then, without warning at all, shifting course.”

Set in the 1850s, Everlasting is a fun and engaging story combining many genres such as romance, fantasy, mystery and adventure.  (Think along the lines of Indiana Jones meets Tuck Everlasting). I read this book many years ago when I was first discovering my love for books and all things romance. It was the lovely cover of Everlasting that caught my attention. I know we shouldn’t ‘judge a book by its cover’ but let’s be honest sometimes we can’t help but be swayed by a pretty picture or title. I really enjoyed it and I remember reading it more than once. Reading it years later, I still found it just as enjoyable. I was able to appreciate the innocence and sweetness of a book that was written for younger readers.

Camille, the heroine of the story, is the daughter of a sea captain with whom she shares a love for the sea. At the beginning of the book, newly engaged Camille is about to set off on her last ever sea voyage with her father. Feeling unsure and confused about her impending marriage, Camille is more than happy to escape and head off on an adventure. (Which just so happens to include her inconveniently handsome childhood friend, Oscar.) However, shortly after departing San Francisco, trouble unfolds with the reveal of a shocking secret and discovery of a map. I won’t reveal the entire plot but I will say that what comes after involves a storm, a magical stone and a forbidden romance.

The romance between Camille and Oscar all began as an awkward relationship between a sea captains’ daughter and his first mate. Their personalities clash due to Camille’s stubbornness and pride and Oscars’ overprotective, if not assertive, tendencies. However, where the story picks up we see that Camille and Oscar have been harbouring unspoken feelings for each other. These feelings, consequently, blossom into something more as the story progresses. The duo faces various dangerous and life threatening situations together, where they begin to rely on and care for each other. I’ve always been a sucker for a forbidden romance. This is somewhat the situation Camille and Oscar find themselves in. Camille’s soon-to-be marriage is the only thing securing the future of her fathers’ business. Camille finds herself torn between her duty and her heart.

“I can’t let anything happen to you, Camille.”

I fell in love with Oscar’s character during the book, he really is the ideal leading man; brooding, handsome and all. He encompasses all the desirable values and characteristics of a romantic hero, yet still possesses the necessary flaws that bring him down to earth. One of the many things that I admired about Oscars’ character was his fierce loyalty to both Camille and her father. He definitely wouldn’t hesitate to put another person’s life before his own and he proved this many times during the book.

Camille’s character is very likable, as she has what I would consider very appealing characteristics. She is determined, independent, loyal and brave. However, her genuine fears and insecurities make her just as appealing because we, as the reader, can relate to them on a personal level. It’s cliche but who doesn’t love a character that doesn’t follow the rules of society? Camille is a girl that appears to live ahead of her time, disregarding the ‘proper’ way a young woman in the 1850’s ‘should’ act. I occasionally found myself feeling confused and frustrated with Camille’s character. Her decisions appeared selfish and she hurt those closest to her with her thoughtless words and actions. Yet, I learned that seeing these flaws in a protagonist was actually refreshing; it reminded me that these characters are human and make mistakes, just like the rest of us.

Camille and Oscar were two very interesting and well-developed characters, Frazier certainly put a lot of thought and effort into bringing them to life.

Unfortunately, I didn’t find the fantasy side of the story as interesting as the other themes, such as say, romance or adventure. I found I wasn’t particularly concerned with the ‘treasure hunt’ story line. The problem wasn’t that the theme didn’t appeal to me; it was actually that it managed to become overwhelmed by everything else going on in the book. I found the strongest aspects of the story to be the characters, the romance and the relationships. Ira, for example, is a character that joins Oscar and Camille half way through the book and helps them on their journey. He doesn’t just help them on their way; he becomes a part of their small family. Even Camille’s father, who only featured in the book for a small part, manages to leave a lasting impression on the reader.

Everlasting is a pleasant read; Frazier’s writing style is simple and flowing and altogether enjoyable. She has a wonderful skill for storytelling and manages to keep the reader interested from start to finish. Everlasting has a bit of everything so if you like romance (who doesn’t) fantasy and adventure then this is the perfect light-hearted read for you!

I think this book would do well if adapted into a miniseries. I say miniseries and not a movie because I think it would be hard to squeeze the entire plot of Everlasting into less than 2 hours of film time. It would also give the audience more time to get to know the characters that Angie Frazier so lovingly created. According to appearance, Lilly Collins or Alexis Bledel would suit the role as Camille. A blonde Josh Hutcherson would do quite nicely for Oscar, accompanied by some shaggy blond hair and tanned cheeks.

RELATED YA Book Review: The Princess Companion – A Romantic Retelling of ‘The Princess and the Pea’

Content Note: Everlasting contains scenes involving fighting and violence. There is no swearing, but there is some harsh language.

Our romance-themed entertainment site is on a mission to help you find the best period dramas, romance movies, TV shows, and books. Other topics include Jane Austen, Classic Hollywood, TV Couples, Fairy Tales, Romantic Living, Romanticism, and more. We’re damsels not in distress fighting for the all-new optimistic Romantic Revolution. Join us and subscribe. For more information, see our About, Old-Fashioned Romance 101, Modern Romanticism 101, and Romantic Living 101.
Pin this article to read later! And make sure to follow us on Pinterest.
By Larissa Reid on June 7th, 2017

Raised in a small town in New Zealand with my three brothers, I had an idyllic childhood where my love for all things romance bloomed. I am now a fully fledged 'hopeless romantic ' earning my keep as a waitress and barista. I live at home with two of my brothers (fun fact: I'm a triplet) my two cats and my parents. Period dramas, classics, gothic romance, musicals and romantic comedies are my not so secret pleasures.
"I feel so intensely the delights of shutting oneself up in a world of one's own, with pictures and music and everything beautiful." - Virginia Woolf