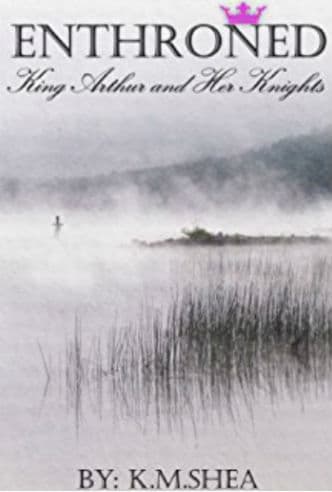 There are some books that I will always pick up. Stories based on the legends of King Arthur are very high on this list. When I saw that K.M. Shea had reimagined King Arthur with time travel and girl power, I knew I had to check out her series. I was a little wary, but I was also curious. Curiosity won out (and a Kindle book sale helped). So far, there are six books in the “King Arthur and Her Knights” series and the first is Enthroned.

RELATED Revisiting Disney: The Sword in the Stone

To be honest, I had a hard time getting into this story. Enthroned starts out slowly, and, again, I was a little wary about the whole concept. Once I got a little farther into the story, however, Shea’s fun and engaging writing, her understanding of the source material, and the fun characters won me over.

Britt Arthurs is a normal American girl on vacation in England when one of her friends convinces her to try to pull an old sword from a stone for a photo. Britt suddenly finds herself transported back in time, meeting Merlin, Ector, and Kay. Arthur has eloped with a shepherdess and this has thrown Merlin’s plans for unifying England out of whack. To find a replacement Arthur, Merlin enchants the sword to call the next worthy King of England, who happens to be Britt, from anywhere in time.

Britt is uncomfortable with finding herself in King Arthur’s Britain. She doesn’t know much about the legends, and although she has studied swordplay, she can’t joust and doesn’t know much about battles. When she realizes that she is going to be a puppet ruler for Merlin, she is angry, but she also realizes she has no choice but to play along. She believes that the whole thing is a dream anyway.

Although she is able to pull the sword from the stone and legitimize her claim to be king, four of the kings doubt her and decide to rebel against her rule over unified Britain. As she waits to wake up, however, Britt keeps busy. As she chooses her council, learns about ruling, and tangles with the Lady of the Lake, Britt comes into her own as her own kind of king. When she finds herself involved in a war, Britt learns about leadership and wins loyalty through her kindness.

Is it all a dream? Will Britt ever be able to get home? Can a normal American girl be King of England? What will happen when Britt has to lead her troops into battle? And will she be able to keep her secret? These questions and more will be answered in Enthroned!

If you enjoy stories about King Arthur, strong female characters, or time travel, Enthroned is worth a read.

Britt Arthurs is a compelling character. She has a hard time adjusting to life in King Arthur’s Britain, as well as with pretending to be a fifteen-year-old boy. Britt is skeptical, strong-minded, stubborn, intelligent, and fiercely loyal. And she inspires fierce loyalty in those around her, from her adopted family to her knights. She is also wary of Lancelot, making for an interesting dynamic.

Merlin, Ector, and Kay are also great characters. They become protective of Britt in their own ways. Kay acts like a big brother to her, and it’s a great dynamic to watch unfold. Ector gives her advice and fatherly love, and Merlin tries to shape her into a good king. Arthur’s elopement messed up many plans, but the three men embrace Britt anyway. Slowly they embrace her as part of their family.

Throughout the story, Shea weaves characters that we know from the legends of King Arthur. These characters are all different than we know, and this was quite a refreshing twist. The Lady of the Lake, for example, did not want to give up Excalibur and has little patience for knights. Merlin is young and handsome, not something we typically see in King Arthur adaptations (BBC’s Merlin aside). As Merlin is always reminding Britt, things aren’t going to be like the legend. She is making the legends. This was a fun way for Shea to continue to play with the source material and explain any changes.

There is a possibility for a love story in later books, particularly between Britt and Merlin. However, at this point, Britt is much too concerned with learning how to be a good King, pretending to be a boy, and fighting to defend her kingdom to worry about romance. She thinks Merlin is handsome, but that’s all for this book.

Shea’s writing style is fun, and we can only see into Britt’s head. This makes the situation feel more relatable; we’re watching the legend unfold through the eyes of our King Arthur. There are lots of references to 21st Century pop culture, but it never feels overwhelming. It’s just the kind of things that a normal, nerdy person would be thinking in those situations. If you enjoy stories about King Arthur, strong female characters, or time travel, Enthroned is worth a read. It’s a different twist on a legend that many people, myself included, hold near and dear.

Have you read Enthroned? If not, are you interested in reading this unique take on the Arthurian legends? Let me know in the comments!

Our romance-themed entertainment site is on a mission to help you find the best period dramas, romance movies, TV shows, and books. Other topics include Jane Austen, Classic Hollywood, TV Couples, Fairy Tales, Romantic Living, Romanticism, and more. We’re damsels not in distress fighting for the all-new optimistic Romantic Revolution. Join us and subscribe. For more information, see our About, Old-Fashioned Romance 101, Modern Romanticism 101, and Romantic Living 101.
Pin this article to read later! And make sure to follow us on Pinterest.
By Bailey Cavender on January 20th, 2017