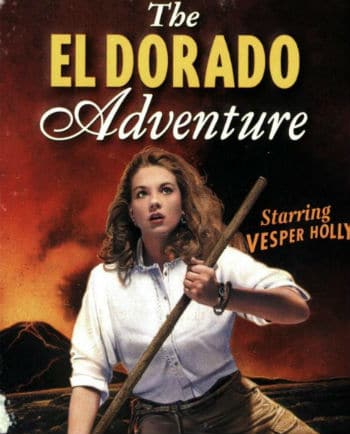 The indomitable Vesper Holly is back, and this time, she has discovered she owns some land in the small republic of El Dorado; land that includes a volcano. If the scrapes of Vesper Holly and her guardian Brinnie in The Illyrian Adventure are anything to judge by, this new chapter in the Vesper Holly Adventures by Lloyd Alexander is sure to be explosive!

Taking place one year after the events of The Illyrian Adventure, in 1873, seventeen-year-old Vesper Holly is amazed to discover that, not only does she own land in El Dorado, but that she owns a volcano. Determined to have a look at her land, and invited by a mysterious de Rochefort who sends two one-way tickets, she and Brinnie journey to El Dorado to investigate. There, they learn that the situation is more complex than they had thought.

Not only is Vesper’s land the ancestral home of the Chirica tribe, but there are those who want to buy it and build a canal through it. This would destroy the Chirica’s home, something they are determined to prevent. Vesper, after meeting the people and their chief Acharro, is determined to help them save their home. However, the developers will stop at nothing to gain that land. Vesper and Brinnie might be in over their heads this time.

Could a volcano, supposedly dormant, help save the land from the plunders? Can Vesper and Acharro come to an understanding, and work together, despite their cultural differences? Is there really oil on Vesper’s land? And who is de Rochefort, the mysterious middleman, working with? Kidnapping, explosives, riverboat adventures, cultural misunderstandings that lead to understanding and respect, and a run-in with a familiar face all play a part in the action-packed The El Dorado Adventure.

The things I like about The Illyrian Adventure are still present; the story is still an adventure story with lots of action and adventure, and it still gives the impression of being designed to be read quickly; with a fast-moving plot hard to put down.

Plus, Alexander gives his readers just enough description to make me, at least, feel like I had a hand in creating the world of El Dorado. The map he includes is very detailed, and the description matches it. However, there is just enough missing that I felt I could fill in the blanks. Some people might find that annoying, but I quite enjoyed it.

The El Dorado Adventure also introduces us to Vesper’s nemesis. If Indiana Jones had Belloc, and Sherlock Holmes had Moriarty, Vesper Holly has Dr. Helvitius. The doctor also appeared in The Illyrian Adventure, and judging by the end of this book, he’ll be around to torment our heroine for several books to come. In a battle of wits between genius adventurers, there can be only one victor.

Honestly, I would say that most anything of Lloyd Alexander’s is worth a read (though I was never a fan of Time Cat, personally), and The El Dorado Adventure is no exception.  This is a solid adventure story about a strong-willed and plucky heroine, and while it’s a fairly quick read, it’s also a really fun one.

Like I said with The Illyrian Adventure, Alexander had a gift for prose and a knack for creating good characters that you can’t help but root for. Whether an assistant pig-keeper or the girl Indiana Jones/Sherlock Holmes, his prose and characters make me want to keep reading. If you’re looking for a quick summer read, check out the Vesper Holly Series, and don’t skip The El Dorado Adventure.

This is the time for adaptations of books with strong female characters, and the story itself is enough of an action/adventure that I think it would be a big hit. The landscape of El Dorado is a fascinating one, and the fictional history weaves well with the history of the European expansion into the Americas, so there’s a lot to draw on here.

I would definitely want the Alexander Estate involved, and although I didn’t mention it with The Illyrian Adventure, I think both films would need to have some sort of cultural consultant, to make sure that the fictional people created weren’t ripping off the culture of any real people, or possibly portraying them offensively. Both books use fictional countries, but that’s no reason to not be respectful of the real people who inspired the fictional ones.

Casting-wise, I think Jane Levy would be a wonderful Vesper while I still see Brinnie as Michael Gambon. This time around, I’m thinking Ian McKellan could be a wonderful Dr. Helvitius. Sean Wei Mah looks about how I pictured Acharro, though he is from Canada, and there is probably an actor from Central America who would better fit the part.

Have you read The El Dorado Adventure? What did you think? Who would you cast? Let me know in the comments!

Our romance-themed entertainment site is on a mission to help you find the best period dramas, romance movies, TV shows, and books. Other topics include Jane Austen, Classic Hollywood, TV Couples, Fairy Tales, Romantic Living, Romanticism, and more. We’re damsels not in distress fighting for the all-new optimistic Romantic Revolution. Join us and subscribe. For more information, see our About, Old-Fashioned Romance 101, Modern Romanticism 101, and Romantic Living 101.
Pin this article to read later! And make sure to follow us on Pinterest.
By Bailey Cavender on May 31st, 2016