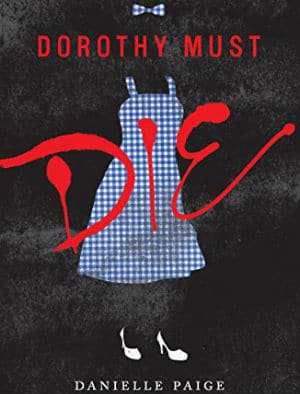 Dorothy Must Die: A Dark Reimagining of a Classic Story (2014)

There has been a trend in fairy tales recently of rewriting the stories we all know and love but adding a dark twist. Dorothy Must Die follows this trend by taking us back to the Land of Oz in this new quartet. Danielle Paige wrote this series, a prequel novella series, and a retelling of the Snow Queen. When retelling a story like The Wizard of Oz, or even just going back to that magical kingdom in a sequel series, the bar is pretty high. Dorothy Must Die reaches it.

When Amy’s trailer ends up in Oz, she is thrilled. Away from the mom who hates her and the classmates who bully her, she has read all the books and knows what to expect. Or so she thinks. As she travels to the Emerald City, however, she learns that things are not right in the Land of Oz. Dorothy is back. She is different, and she has taken over.

Power does strange things to mortals, and Dorothy is now a crazy dictator. With the help of the Scarecrow, the Tin Man, the Cowardly Lion, and Glinda, Dorothy has started a reign of terror. She has put a spell on Ozma, the rightful Queen of Oz, taken the throne, and she and Glinda are stealing Oz’s magic.

Amy saves Ollie, a flying monkey, and learns that the flying monkeys are resisting Dorothy. Some of them, Ollie included, have cut off their wings to keep their freedom. At the palace, Amy sees what Dorothy and her friends are doing to Oz. She meets Pete, a gardener who is more than he seems and her one ally in the palace. The day before her trial, Amy is freed by Mombi, a witch. Mombi and the other Witches of Oz fight against Dorothy to free Oz. Needing someone to kill their evil ruler, the witches Glamora, Gert, and Mombi, and their apprentice Nox, begin to train Amy. When she goes back to the palace, however, Amy doesn’t know who to trust. The witches aren’t the only ones who are trying to kill Dorothy…

What is the Wizard doing back in Oz? And don’t count out the flying monkeys just yet!

The reader gets to know Amy before she goes to Oz. Her life has been rough, and as she struggles with the darkness and anger inside her, the reader understands where she is coming from. Not only is her struggle real to readers and very human, but the reader understands her desire to do good. She’s a character who wants to save the world and to do what is right. But she also wants to destroy her enemies. Since she has the power to do so, this is a struggle. Because the story is told in first-person, we know exactly what is in Amy’s head, and that makes her more relatable and sympathetic. It also makes the other characters more mysterious. Like Amy, we don’t know who we can trust, if anyone.

The land of Oz in this series is similar to the Oz of the original series, but it’s a lot darker. The Scarecrow is performing experiments on the citizens. Glinda is draining people’s magic and the Lion drains their courage, acting like two dementors. And the Tin Man has an army of human/machine hybrids that he uses to enforce Dorothy’s wishes. The citizens of Oz are afraid, and the setting, again, is much darker and grittier. This makes sense as it’s about a character who felt unloved by her mother, was thrown into a strange land, was training to become a magical assassin, and actively tried to kill several other characters (even if she was trying to save Oz). The dark tone really works, though, and it never felt like too much for the story. Paige found the correct level of darkness and didn’t make it too over the top.

There are a lot of clever references to the original series of Oz books. This makes Dorothy Must Die much more enjoyable. Fans of Marissa Meyer’s The Lunar Chronicles and Gregory Maguire’s Wicked series will probably enjoy Dorothy Must Die. If you like darker twists on classic stories, stories where the villains may be the heroes or sequels series, you should check it out.

With all the remakes of classic stories, this is exactly the kind of movie that would do well. As long as Danielle Paige is very involved in adapting the story into a movie, this could be magical. This would be great as a live-action/CGI hybrid film, similar to The Chronicles of Narnia. This would let the magic of the story shine through, while also allowing the series to show the new, grittier Oz.

For casting, I imagine Judi Dench as Gert, Maggie Smith as Mombi,  Meryl Streep as Glamora and Glinda, Rupert Grint as Ollie, Ewan McGregor as the Tin Man, Tom Felton as the Scarecrow, and Ben Barnes as the voice of the Lion. Dorothy would be Rachel Weisz or Felicity Jones. For Pete, I imagine Thomas Brodie-Sangster from Love, Actually, and for Ozma, I imagine Evanna Lynch from Harry Potter. For Nox, I imagine Suraj Partha, and for Amy, I imagine Abigail Breslin or Hailee Steinfeld.

CONTENT WARNING: There is some brief but serious swearing. It’s also kind of dark, so be aware of that.

Our romance-themed entertainment site is on a mission to help you find the best period dramas, romance movies, TV shows, and books. Other topics include Jane Austen, Classic Hollywood, TV Couples, Fairy Tales, Romantic Living, Romanticism, and more. We’re damsels not in distress fighting for the all-new optimistic Romantic Revolution. Join us and subscribe. For more information, see our About, Old-Fashioned Romance 101, Modern Romanticism 101, and Romantic Living 101.
Pin this article to read later! And make sure to follow us on Pinterest.
By Bailey Cavender on March 2nd, 2017