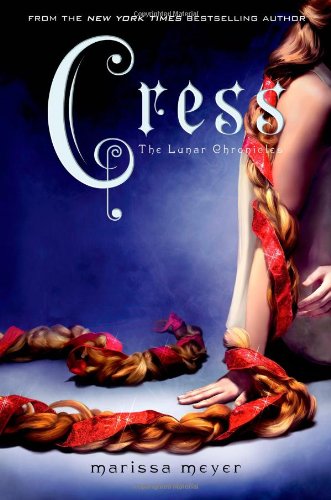 I always feel like the third book in a five-book series or the second book in a trilogy have the hardest job of any other book in the series; they have to continue building the conflict, raising the stakes, and provide some answers and closure (but not enough that the series feels complete). Sometimes, authors really make this work, and Marissa Meyer, in this series, is one of those authors.

Cress is the third book in The Lunar Chronicles, a series that ended with the release of the fifth book, Winter, just this week. The series is a post-apocalyptic and futuristic reworking of the Cinderella, Red Riding Hood, Rapunzel and Snow White fairy tales, with the fourth book focusing on the backstory of the Evil Queen. Cinder set up the story, Scarlet continued it while raising the stakes, and Cress serves as the continuation of the main plot, setting up the story for both the history in Fairest and the conclusion in Winter. As with Cinder and Scarlet, the story of Cress is a beautiful blend of fairy tale and futuristic settings.

I’m going to keep this as spoiler-free for Cress as possible, but there will be a few spoilers for Cinder and Scarlet after this point, so be warned.

We pick up the story toward the end of Scarlet, right as the Lunar Special Operatives are being unleashed on an unsuspecting Earth. Cress, in her satellite prison, was helping Cinder in the first book and also has been helping keep Cinder’s ship hidden from the Queen now. Raised in isolation on the satellite with no regular companionship and possessing extreme computer skills, Cress is a Lunar Shell. Shell is the term that means a Lunar person with no magical gift. Under Levana’s rule, all Shells were taken away and never seen again. It was assumed that they were killed, but as the novel unfolds, we learn that that was not the case.

Cress has always dreamed of visiting Earth, and gets her wish when a rescue mission gone awry ends up with Captain Thorne blind and the two of them in her satellite, crashing in the deserts of Africa; Scarlet a prisoner on Luna, and Cinder, Wolf and a Lunar guard heading to Africa to meet with Dr. Erland from the first book (who wanted to teach Cinder more about her powers).

The situations are not a total waste. While Cress was previously dreaming of being rescued by a dashing hero, now she not only has to save herself, she has to help save the dashing hero as well. Meanwhile, Cinder is still struggling with her responsibility to a people she didn’t even know she had while wrestling with the morality of using her gift for the good of her people both on Luna and Earth. Scarlet’s capture throws her into the path of Princess Winter and places her on Luna. I’m convinced that this will be important in the final book.

Cress and Thorne make a slow and painful journey across the desert, where they both learn new things about themselves and each other, before meeting up with Cinder, Wolf and Dr. Erland. Together, they begin planning their plot to end tyranny on Luna and to save Earth as well. Meanwhile, the terrible truth about the plague Earth is suffering from begins to surface, changing the face of Earthen/Lunar relations forever.

As Cress struggles with both her infatuation for Captain Thorne and her feelings of uselessness from having been locked up in a satellite her entire life, Cinder learns how important she is to the preservation of Earth from Queen Levana and hatches a daring plot (in several stages). Cinder’s confrontation with her stepmother is a reminder that it is our choices that make us who are (which might be a line from Harry Potter, now that I think of it), and many other characters face similar situations.

Cress also learns about the power of choice as well as struggling with another question. As she had been Levana’s programmer, she had been responsible for cloaking the ships that the special operatives rode down to Earth prior to the attacks. Her struggle takes the form of the age old question; if she didn’t know what was coming and was just following orders, how much blame did she bear for the massacre that occurred at the end of Scarlet? Cress’ feelings of guilt lead her to work with Cinder and her band to take down Levana and replace her with the long-lost Princess Selene.

These two themes, following orders and the power of choice, are added into other topics touched on in this book including prejudice, madness, loyalty, doing wrong to do right, genetic modification, human experimentation, the fall of heroes, duty versus self, and biological warfare. Some humor is peppered in here and there to create a more balanced tone; it’s a fun book filled with some really heavy material and able to strike a difficult balance between the two extremes.

In Cress, Meyer continues to build the world she has created in previous books. She is also able to reintroduce us to characters we remember from previous books (Dr. Erland, Cress and Cinder’s stepfamily), and both tie up some plot threads and answer questions from earlier books while creating more questions for her readers (the Shells and the plague). The stakes still seem real, and Meyer does not shy away from causing her characters pain. I have loved that about this series; the actions that her characters take have consequences, and these consequences sometimes end in death. The characters are fighting a revolution and that can be costly.

The romance in this book is a continuation of the previously established couples, Scarlet and Wolf and Kai and Cinder while adding the new romance of Cress and Thorne. While Scarlet and Wolf are established as a fairly strong romantic couple, the others have significant growth throughout the book.

Cress, trapped in her satellite, has a major crush on the dashing pilot who seems like a scoundrel (and honestly is one). Her innocence drives him to want to protect her from the world, including himself. In the end, they have to take care of each other, and Cress learns that she is more capable than she realized. This, in turn, leads to her crush developing into real feelings throughout the novel, and there are strong hints that those feelings are reciprocated. They remind me a lot of Flynn Rider and Rapunzel from Tangled, actually.

While Cress and Thorne are an adorable couple, Kai and Cinder are the most interesting, to me. The romance has been building since the first book and I’m sure it won’t be resolved to my satisfaction until the final book in the series. This couple’s path has been filled with complications. These include her status as a cyborg, a Lunar, an escaped convict and a Princess trying to liberate her people (what Cinder decides she is going to fight for), and his as an Earthen Emperor. Kai is supposed to be tracking her down so she can be deported to Luna, but he still has feelings for her.

These feelings are further complicated by his task of tracking her down, fears that she used her Lunar gift to manipulate him, and fears that Queen Levana will kill his people if she does not get her way. The marriage alliance that he agrees to fill Cinder with dread, not only because he is getting married but because he is playing into Levana’s hands (and is powerless to do otherwise). Their story is sweet to me because they are two individuals in positions of influence with great responsibility to large groups of other people. While both are acutely aware of each other and their own feelings, they cannot let that stand in the way of their duties.

This series is wonderful in many ways (the way the books build on each other, the new spin to classic stories, and the wide variety of issues discussed in each book), but something that Cress drives home to me, at least, is that every book has a different heroine. Cinder, Scarlet, Cress and Winter (who makes an appearance) are all distinct women who experienced vastly different upbringings and have unique skill sets. This means that they can and do teach each other and bring different skills to their interactions. Again, the stakes are real and Meyer draws the reader in, making you feel invested in her world and its conflicts.

With the recent releases of Fairest and Winter, the story of Cinder the Cyborg Princess and her friends is drawing to an end. Since I still have at least 500 pages to read before that happens, however, I plan on just enjoying watching the story unfold. Cress is a wonderful addition to a stellar series and comes highly recommended.

My opinion has changed slightly on the way this series would be best adapted to cinema. I had thought a series of films, but now I’m thinking that a mini-series for each book would really be ideal because there is so much going on and Meyer has, so far, been able to tie everything back together. The only problem would be that the special effects budget would have to be pretty large. The world Meyer has created is a lush and complicated one, one that uses both science and technology, and while I know that is possible to translate, it wouldn’t be cheap.

Our romance-themed entertainment site is on a mission to help you find the best period dramas, romance movies, TV shows, and books. Other topics include Jane Austen, Classic Hollywood, TV Couples, Fairy Tales, Romantic Living, Romanticism, and more. We’re damsels not in distress fighting for the all-new optimistic Romantic Revolution. Join us and subscribe. For more information, see our About, Old-Fashioned Romance 101, Modern Romanticism 101, and Romantic Living 101.
Pin this article to read later! And make sure to follow us on Pinterest.
By Bailey Cavender on November 14th, 2015