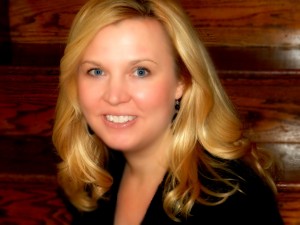 Today we’re excited to have YA author Georgeann Swiger of the YA book series, The Trinity of Souls taking our Petticoat Personality Test. (You can read my review of Book I: Adorned HERE).

But before you do, learn more about Georgeann by checking out some of her fun answers!

What is your favorite book, movie and /or TV Show?

There are so many good books in the world. I guess that’s why my favorite book is always changing. I recently read Obsidian by Jennifer Armentrout and really liked it. As for favorite TV show, that changes with the season. I’m a huge fan of The Walking Dead. It’s the one show on right now that I watch every week.

Since I still have the Gone With the Wind poster I got when I was a teenager, I’m going to say Rhett Butler. Rhett was good looking, sweet-talking and a gentleman. He stayed devoted to Scarlet longer than he should have, but he always remained his own man.

I don’t like characters that are fake, sleazy and selfish. A lot of the reality TV shows seem to have casts with these traits. Let’s just say, I’m not impressed.

Is there any kind of music or songs that inspire you?

Music is a big inspiration for me. When looking for inspiration, I listen to everything from Gregorian chants to rap songs. Different types of music bring out different moods and reactions in me that help me create characters and scenes. When I wrote Adorned, I just happened to be listening to a lot of Prince’s music and it set the tone for Eli’s personality.

Is there any movie or TV couple past of present you absolutely love?

I was a big Buffy the Vampire Slayer fan when the show premiered. The sexual tension between Buffy and Angel had me hooked from the first show.

If you could be or live as any character (book/movie/TV show), who would you choose?

It would be fun to be Penny from The Big Bang Theory. I would love to live across the hallway from Sheldon and Leonard and sing Soft Kitty. J

I’m currently reading Losing It by Cora Carmack and really enjoying it.

I’m a sweets lover. Give me a piece of cake or a cookie and lots of coffee and I’m happy.

I would be an indoor house cat that belongs to an old woman who has plenty of money to buy canned cat food. I say this because I image my poor cat would like nothing more than to have all the Fancy Feast she could eat and not be bothered with being picked up and mess with everyday. All she likes to do is nap. Now that’s a life!

I would like to see Unearthly by Cynthia Hand turned into a movie. When writing Adorned, I read a lot of angel books and Unearthly was one of my favorites. 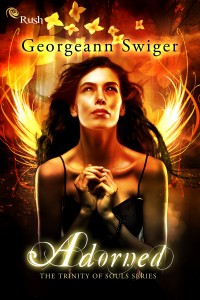 Micah, the angelic soldier ordered to protect her until she transitions from human to angel, promises her death will be a glorious experience as long as she follows his rules. But getting Anya through this life and to the next isn’t as simple as Micah expects. His job becomes even more difficult after he unwittingly performs a miracle that exposes Anya’s hidden angelic light.

With her secret out, Hell’s legions begin targeting her. Unfortunately, Hell’s minions are the least of Micah’s worries. He’s more concerned about the forbidden human emotions he’s developed toward Anya.  Even more troubling, is she seems to love him too. And giving in to those feelings, could mean dire consequences for them both.

“Georgeann Swiger earned her degree in journalism from West Virginia University, and then spent five years as an anchor/reporter at WBOY-TV in Clarksburg, WV.  After having children, she left television news to be a stay at home mom. During that time, she discovered creative writing was more fun than writing about real life tragedy.  Imagining interesting characters and having them come to life on the page is now her passion. When she’s not writing, she works as a substitute teacher.  She lives in Reedsville, West Virginia with her husband, two kids, a beagle dog and a temperamental cat who tries to rule the house.”

Our romance-themed entertainment site is on a mission to help you find the best period dramas, romance movies, TV shows, and books. Other topics include Jane Austen, Classic Hollywood, TV Couples, Fairy Tales, Romantic Living, Romanticism, and more. We’re damsels not in distress fighting for the all-new optimistic Romantic Revolution. Join us and subscribe. For more information, see our About, Old-Fashioned Romance 101, Modern Romanticism 101, and Romantic Living 101.
Pin this article to read later! And make sure to follow us on Pinterest.
By Amber Topping on November 24th, 2013