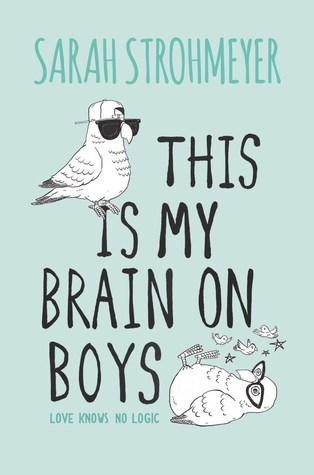 ADVANCED REVIEW: This is My Brain on Boys – Expected publication May 10, 2016, from Balzer + Bray

Ah, love. It’s what makes the world go round, right? Not so much for Addie Emerson in This is My Brain on Boys. Addie is a science whiz, Ivy League-bound. She has no time for boys, with her mind focused on getting into Harvard. Addie’s on her way back to school in Boston for the summer in order to conduct an experiment that will land her a scholarship to college. On the plane, she meets a boy who also attends her school, Academy 355, but they’ve never interacted before. Addie notes that the boy is cute, but has no interest in him other than for scientific observation. The boy, when he figures out who Addie is, has a brief moment of panic, hoping that she doesn’t know who he is. He is Kris Condos, and Addie is the reason why Kris almost got kicked out of school. Kris, his girlfriend Kara, and his friends ransacked the lab at school — Addie’s lab — during the previous academic year, in protest to the supposed animal cruelty that was happening.

Addie is unaware of Kris’s true identity, but when her best friend Tess and Tess’s boyfriend Ed show up at the airport to pick Addie up, Tess threatens to blow Kris’s cover. But Tess cares too much for Addie and tells Kris that if he does anything to hurt Addie, then he’ll have to answer to her. The group gives Kris a ride to school, much to Addie’s delight (and Tess’s disdain), who thinks that Kris could be a new friend.

Addie’s thesis for her latest experiment is that any two people can fall in love, given the right elements.

She’s seen it happen before — with Tess and Ed. A nature hike, a minor accident, and a romantic rescue all bottled together was the beginning of Tess and Ed’s relationship. Addie saw firsthand how this happened, and thinks that if she can re-create a similar set-up, then she can prove that falling in love is a lot simpler than it seems.

Addie’s lab partner, Dex, is a typical nerd, with more passion for the lab and the thrill of scientific discovery than anything else. He’s not enthused over Addie’s experiment but knows that if she succeeds, he succeeds, and is along for the ride. Lauren, a field hokey player, and Alex, a student from California working at the Academy, are part of the experiment along with Kris, who is roped into the experiment by Addie and Dex’s mentor, Dr. Brooks. Addie and Dex have set up the experiment so that Lauren will get equal time with both boys through a series of basic encounters. But after an exciting outing with Kris, Lauren will ultimately choose him over Alex because as Addie puts it, Lauren’s brain will have been tricked into thinking she is in love from the neurochemicals having been released during the more exciting event with Kris. However, when Dex tells Addie who Kris really is, Addie tries to not let anger get in the way of her experiment. Her lab being trashed the semester before had hurt her and she hadn’t truly let her anger out, especially not knowing who the culprits were.

Kris tries to explain himself during a volleyball game between the girls’ and boys’ summer student dorms, and Addie ends up smashing the ball in his nose!

The game is only the beginning of the complications to follow. As Addie gets more and more entrenched in the experiment, the more she realizes that Kris isn’t actually as terrible as everyone is making him out to be, and with Dex threatening to do his own experiment without Addie, and Kara trying to weasel her way back into Kris’s life, things could spin out of control.

This is My Brain on Boys is a smart read. Readers will see similarities between Mayim Bialik’s character Amy Farrah Fowler on TV’s The Big Bang Theory, which might prove distracting for some, but the other characters help to balance out the more awkward moments. For readers who have felt an unrequited crush and can remember what it’s like being a teenager and not knowing how love (can) work, this book is for you! A perfect summer novel I’d recommend to anyone who wants a good read with a little more to it than typical beach fare.

This quirky novel would be a great movie, in the style of Sisterhood of the Traveling Pants and Angus, Thongs and Perfect Snogging — lighthearted, but clever. As Addie, I’d cast Laura Marano (TV’s Austin & Ally) who could pull off Addie’s adorkable qualities. For Kris, Gregg Sulkin (TV’s Faking It and Pretty Little Liars) would be a good fit, charming audiences as the very likable Kris! Tess plays a significant role as Addie’s best friend, and Molly Quinn (TV’s Castle) could give the Addie-Tess friendship a fun angle. Dex also plays a significant role, and Hunter Parrish (TV’s The Following and Amazon’s Hand of God) could give the character his snarky edge!

Our romance-themed entertainment site is on a mission to help you find the best period dramas, romance movies, TV shows, and books. Other topics include Jane Austen, Classic Hollywood, TV Couples, Fairy Tales, Romantic Living, Romanticism, and more. We’re damsels not in distress fighting for the all-new optimistic Romantic Revolution. Join us and subscribe. For more information, see our About, Old-Fashioned Romance 101, Modern Romanticism 101, and Romantic Living 101.
Pin this article to read later! And make sure to follow us on Pinterest.
By Clarissa Hadge on March 17th, 2016

3 thoughts on “YA Advanced Review: This is My Brain on Boys — Love as an Experiment”