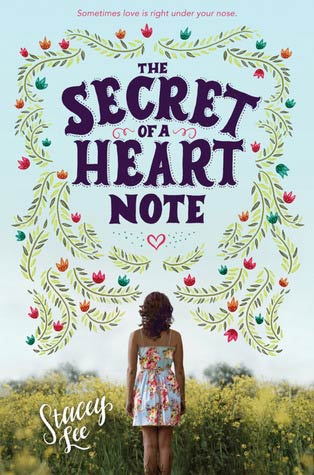 THE SECRET OF A HEART NOTE Review

Expected Publication of The Secret of a Book Note: December 27, 2016 from Katherine Tegen Books

The Merriam-Webster dictionary defines synesthesia (noun) as a concomitant sensation; especially:  a subjective sensation or image of a sense (as of color) other than the one (as of sound) being stimulated. For Mim, this means that she can smell people’s base, top, and heart notes in order to make elixirs. Mim knows this to be true — heartache smells like blueberries, and things like disdain smell like rancid kumquat. Mim and her mother, Dahli, are the last two aromateurs in the world.

Mim’s predecessors have decreed that no one shall fall in love, or if they do, they shall lose their special ability to figure out the thousands of scents that make up heart notes.

Mim’s aunt, Bryony, did fall in love and serves as a warning to Mim to not do the same. With other rules set in place by the previous aromateurs, Mim’s mother holds fast and hard to this particular rule and has homeschooled Mim for most of her life. But now Mim wants to go to high school, like most teens, and her mother will let her, as long as she keeps up with the aromateur work at home.

When Mim’s algebra teacher, Mr. Fredrics, requests an elixir to see if the school librarian, Ms. DiCarlo, Mim’s mother thinks it’s a conflict of interest and wants Mim to drop algebra. Mim cajoles her mother to let her stay if she can give Ms. DiCarlo the elixir successfully. Already concerned that Mim isn’t doing well in school, her mother reluctantly agrees.

As Mim is out collecting samples, she has a chance encounter with the head soccer star at school, Court Sawyer. Since her entire life is as an aromateur, Mim has an understanding of multiple varieties of flowers and plants, and by giving Court the oils from plantain leaves when he is stung by a bee, resulting in Mim saving Court from a severe allergic reaction. Court’s ex-girlfriend Vicky, witnesses the entire interaction, and Mim smells the jealousy from the other girl.

Knowing the rule of not falling in love, Mim pushes her feelings aside.

When Mim goes to give the elixir to Ms. DiCarlo, she follows the rules — i.e. by smelling the target — to make sure that Ms. DiCarlo isn’t already involved with someone else, or has a sociopathic streak. All systems are a go, and Mim pours the elixir into Ms. DiCarlo’s coffee cup. Unfortunately, Court’s mother, Alice, who is at the library to pick up some romance novels — and who is going through a very nasty, and very public divorce with her husband —  accidentally takes Ms. DiCarlo’s coffee, and drinks the elixir meant for Ms. DiCarlo.

RELATED ARTICLE: This is My Brain on Boys Review

Horrified at the mistake, Mim tries to rectify her actions and winds up making things more complicated. With Vicky threatening to blackmail Mim’s best friend, Kali, unless Mim agrees to make Vicky an elixir to win back Court; with Mim’s feelings for Court growing stronger by the day, and her mother on her case about balancing aromateur work and school, Mim starts to buckle under the pressure. Will true love conquer all, or will Mim return to her life as an aromateur with no one to love?

I was so impressed by the detail about scents in The Secret of a Heart Note! Stacey Lee clearly did her research, and it shows! The details don’t bog the story down, but lend to it, giving it strong layer — much like the heart notes that Mim creates! Lee captures the idea of a family with Mim and her mother, showing that the nuclear family doesn’t always have to include a mother, father, and children, showing an appreciation of single-motherhood that is lacking in YA. The writing is witty and fun, and I found myself fully immersed in Mim’s thoughts and actions. With a similar tone as Jenny Han and a cleverness that harkens to L.M. Montgomery’s Anne of Green Gables series, and 10 Things I Hate About You, readers looking for a contemporary, diverse, YA romance will not be disappointed with The Secret of a Heart Note!

Content warning: Some teen drama, no violence or sex.

The Secret of a Heart Note would be a great TV or mini-series. There is enough content as Mim tries to get the right elixirs to the right clients that each episode could have a different client as the series expanded. For casting, I’d place Nichole Bloom (NBC’s Superstore and the American version of Shameless) as Mim. She’d bring a lightheartedness to the character while showing Mim’s naivety about the world and inner strength. For her mother, I’d cast Elizabeth Chung (Memoirs of a Geisha and Anita Ho) who could be tough but give Mim that strong female in her life that she needs. For Court, I’d cast Zachary Gordon (the Diary of a Wimpy Kid series) since he could balance the line of cute and concerned as he helps Mim fix her elixir mix-up!

Will you be checking out The Secret of a Heart Note? Sound off below…

My feelings will not be repressed. You must allow me

Our romance-themed entertainment site is on a mission to help you find the best period dramas, romance movies, TV shows, and books. Other topics include Jane Austen, Classic Hollywood, TV Couples, Fairy Tales, Romantic Living, Romanticism, and more. We’re damsels not in distress fighting for the all-new optimistic Romantic Revolution. Join us and subscribe. For more information, see our About, Old-Fashioned Romance 101, Modern Romanticism 101, and Romantic Living 101.
Pin this article to read later! And make sure to follow us on Pinterest.
By Clarissa Hadge on June 21st, 2016