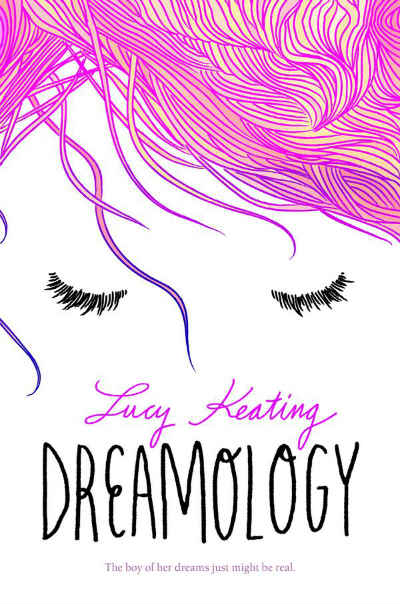 For years, Alice has dreamed of one person every night, a boy named Max. They’ve traveled all over the world and had fantastic, impossibly unrealistic adventures together, and every time Alice wakes up, she knows it’s only a dream. But that doesn’t keep her from wanting to be completely immersed in her dreams and have Max as a dream boyfriend.

No one knows about Max, except for Alice’s best friend Sophie. When Alice and her father move from New York to Boston, she wonders what her new life will be like in the quiet brownstone her grandmother and mother once lived in. Alice’s parents separated, and now her mother lives in Madagascar studying speech patterns with apes. Alice happens upon a box of mysterious postcards from a place called the Center for Dream Discovery but doesn’t think too much of it. Sophie encourages Alice to branch out, to stop thinking so much about Max, and to concentrate on meeting a real boy.

Alice is in for a wicked twist of fate.

When Alice walks into her new high school, Max is sitting in her homeroom, as real as anyone else in the class. Alice thinks that she’s imagined him or is going crazy, because certainly someone from her dreams doesn’t just appear in broad daylight! As she watches him, she realizes that although this Max looks exactly like her Max, there is a big difference — their personalities are completely different. Trying not to spook him, Alice tries to talk to him but gets distracted by Max’s girlfriend, Celeste. As she goes to sleep that night, Alice wonders which Max she’ll find in her dreams. It’s the same Max as she’s always expected, not the one who has appeared in her real life. Confused by this turn of events, Alice finds some solace in talking to her father, a neuroscientist, but she chooses not to tell him everything about what’s happened to her.

Alice decides to go to the Center for Dream Discovery, which is on the MIT campus, to find out answers about her dreams and why Max has suddenly appeared in real life.

After a frustrating visit to the CDD and an interaction with Dr. Petermann, the head of the center, Alice snags an employee ID from one of the workers with the idea to sneak back into the center and try to get to the bottom of things. The next day at school, she tries to talk to Max again, which starts out disastrously, but when Max prevents Alice from eating a cookie made with almond flour, Alice begins to suspect something is going on. The real life Max wouldn’t know she is allergic to nuts, but dream Max definitely does. When the real Max admits that he knows something is going on too, Alice feels justified. She tells him about her plan to sneak into the CDD, but Max is reluctant to join her. Alice becomes more confused and is hurt because Max tells her that even though he has experienced everything that she has in her dreams — their friendship and romantic interludes — he can’t just dump Celeste for Alice. When Max shows up the same night Alice has decided to break into the CDD, Alice wonders if he’s more invested than he’s letting on.

Alice and Max accidentally run into Dr. Petermann, explain their situation, and he agrees to help them.

As events from Alice’s and Max’s dream life and real life start to sync together, they both realize that they may have to let go of their dream life together or risk losing their sanity altogether.

Dreamology strikes a great balance of contemporary teen speak with a dash of fantasy thrown in. Alice’s narration is extremely funny and makes her a likable protagonist. Because the reader is in her head so often, it would be easy for the plot to get bogged down, but with interludes between Alice’s dream life and real life, it helps to keep the pace from dragging. This is a lighthearted read and the perfect book for a reader needing a pick me up! It’s being pitched as Eternal Sunshine of the Spotless Mind for the YA set. While this is a good comp title, Dreamology doesn’t have as many dark turns as Eternal Sunshine. I loved the dream sequences since they help to show how invested Alice and Max are in their relationship — and there’s a few fairly zany ones! However, Lucy Keating manages to keep the overall tone from being too sugary or cutesy. Alice and Max have a fairly typical teen high school romance, but there are great moments of tenderness between the two.

Dreamology would be a fun film, in the vein of lighthearted films like Love, Rosie and (500) Days of Summer. For Alice, I’d cast Kara Hayward, most famous for her role as Suzy in Moonrise Kingdom. She definitely has the acting chops for a dreamy contemporary fantasy! For Max, I’d cast Nat Wolff, who’s won the hearts of teens the world over in the two film adaptations of John Green’s novels The Fault in Our Stars and Paper Towns.

Do you think you’ll check out this great new YA read? Sound off below…

Our romance-themed entertainment site is on a mission to help you find the best period dramas, romance movies, TV shows, and books. Other topics include Jane Austen, Classic Hollywood, TV Couples, Fairy Tales, Romantic Living, Romanticism, and more. We’re damsels not in distress fighting for the all-new optimistic Romantic Revolution. Join us and subscribe. For more information, see our About, Old-Fashioned Romance 101, Modern Romanticism 101, and Romantic Living 101.
Pin this article to read later! And make sure to follow us on Pinterest.
By Clarissa Hadge on November 5th, 2015