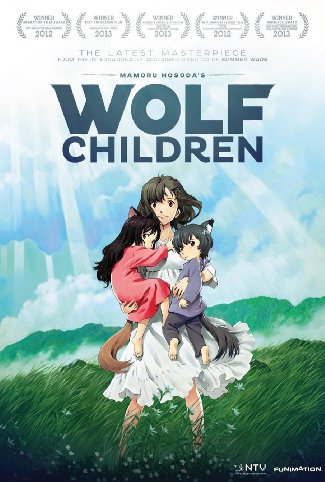 Wolf Children is a Japanese anime film directed and co-written by Mamoru Hosoda, who also directed Summer Wars and The Girl Who Leapt Through Time, which are two other really good anime films that I highly recommend. As one can imagine, my expectations were high and I had previously heard nothing but positive things about this film. I went into it with an excited and open mind.

This film is about a young college woman named Hana who meets and falls in love with a man who is also half wolf. He is not a werewolf. This is something that he was born with and he can change form at any time. He is one of the last of his kind. Eventually Hana gives birth to two children who also have wolf forms and when the husband tragically dies, it is Hana who must raise them alone. This of course leads to many conflicts, not just with Hana having to keep the other side of her children a secret from other humans, but also with taking medical care of a child like that. There is this great scene where Hana must decide if she should take her son to a vet or a pediatrician. What if the child changes form on the medical bed? All of these interesting problems arise. The family moves to a rural country and Hana must learn how to be a farmer while raising her kids and teaching them about life. However, she is not very knowledgeable about this other, animalistic side of her kids and has no one to turn to for help. One of the great things about this film is how it is able to take such a strange premise and make it believable and realistic to the point of genuine emotional investment. Now the themes of Wolf Children are quite common but they are still well told. Wolf Children centers on being born different and the choices that have to be made because of it. It is also about keeping a secret side of yourself and being afraid to be yourself around other people. The story is quite simple but it is still very effective.

The film does a wonderful job of setting up the main character Hana. She is a single mother who is doing everything she can to raise her kids, but she has to deal with this whole other side to them that she does not know very much about. When the kids turn into wolves, they can still talk and tear up her house but she does not completely understand this animalistic side of them so she has to make it up as she goes along. I found it so fascinating how Hana is able to deal with each issue as it comes and she is probably one of the most resilient characters I have seen in a while. No matter the challenge or heartache, she faces it with a smile and determination. I had so much admiration and respect for her by the end. The dialogue between Hana and her children is so well written and incidental. As for the children themselves, they really acted like children especially when they would throw tantrums or get upset and angry. But they also have their animalistic side, which made their outbursts of extreme emotion even more interesting to watch. They are also very different, both in personality and character development. Yuki starts off as the wild, energetic and outspoken one. As she grows up, she tries to be a normal girl with a normal life. Ame stats off as very timid, shy and not comfortable with his wolf self. As he grows up, he becomes more assertive, brave and accepting of his wolf side. Hana’s relationship with her kids is very strong and dynamic. In fact, all of the relationships in this film are strong and dynamic. Hana and the father’s relationship is strong, I really felt their connection and love. Hana’s relationship with the villagers was really great, especially with the farmer who teaches her to grow crops. Yuki’s bond with her friends is also nice. All of the relationships are unique and lively.

The animation of this film is stunning. It is fluid, vivid and bright. In fact, it reminded me very much of a Studio Ghibli film, with lush and beautiful backgrounds. The film also has such a beautiful atmosphere. There are many quiet moments in the film such as the mother learning how to plow her fields properly. There is nothing epic or grand about it, you are merely watching a woman struggle to provide for her family and I found it to be quite heartwarming. It is easy to think this is a kind of film that can be melodramatic or cheesy but the film never goes into that territory because of the emotionally powerful and silent imagery. Some of the scenes were so powerful, my jaw dropped in silent awe. The film captures the beauty and understanding of small moments, as well as an underlying sense of melancholy beneath the joy and whimsy. An extended sequence of the family playing in the snow, for example, is one of the most gorgeously animated and infectiously joyful scenes I have seen in quite some time. It actually gave me chills. I have not had an animated film have such a visceral physical effect on me since Laika’s ParaNorman. I would say that is an impressive feat.

If you are a fan of anime, I undoubtedly recommend this film. If you are not, I still say give the film a chance. It has many universal elements that can appeal to kids and adults no matter what country one is from. Wolf Children is an absolutely wonderful anime film and I loved every minute of it.

Our romance-themed entertainment site is on a mission to help you find the best period dramas, romance movies, TV shows, and books. Other topics include Jane Austen, Classic Hollywood, TV Couples, Fairy Tales, Romantic Living, Romanticism, and more. We’re damsels not in distress fighting for the all-new optimistic Romantic Revolution. Join us and subscribe. For more information, see our About, Old-Fashioned Romance 101, Modern Romanticism 101, and Romantic Living 101.
Pin this article to read later! And make sure to follow us on Pinterest.
By Moriah Burbank on March 7th, 2015