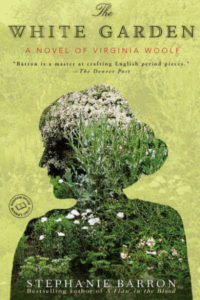 Book Review: The White Garden: A Novel of Virginia Woolf (2009) by Stephanie Barron

The kernel question of Stephanie Barron’s novel The White Garden is what if Virginia Woolf did not drown herself in the River Ouse in March 1941, as is the recorded history? Since it took three weeks to find her body, what if – in that intermediary time between apparent suicide and body recovery – she had lived, she had thought, she had planned, she had written.

It’s an intriguing premise that leads to an outright treasure hunt, a plot not dissimilar to A.S. Byatt’s Possession or Dan Brown’s The DaVinci Code or, heck, that 80s classic and a personal favorite, The Goonies. There is always something rather appealing about a treasure hunt and a literary one at that.

An American in England Lugging Around Much Emotional Baggage

Jo Bellamy, a mid-thirties landscape designer, arrives in England to visit Sissinghurst Castle in order to study the celebrated gardens, especially the White Garden, which a wealthy client stateside wants to be recreated in his backyard in the Hamptons. Sissinghurst Castle was once the home of Vita Sackville-West, an enthusiastic gardener, as well as a dear old friend and sometime lover of Virginia Woolf.

It becomes readily apparent that Jo has brought much emotional baggage along on this trip. Her wealthy, married client Graydon Westlake, who is funding this study trip, is attempting to seduce her, and she is on her way to being seduced, struggling to figure out whether she should stay or she should go, should give in or get out. She’s also grieving her beloved grandfather’s sudden suicide just a couple of months prior, feeling guilty, with this sense of unease that the announcement of this trip abroad somehow inexplicably precipitated his decision to end his life. He left no note.

A Discovery and a Quest

So there she is in the White Garden, in the County of Kent, discovering her own grandfather’s connection to the place, and uncovering quite by chance an old book, a diary, in a crate in an old shed at the estate, that is addressed – of all people – to her grandfather. She begins to read and knows it’s not her grandfather’s work, and as she reads, she begins to put it together – it appears to be Virginia Woolf’s, but the first entry is dated the day after Woolf supposedly drowned herself the 28th of March 1941.

Thus the search begins. Can the diary be authenticated? Can it be substantiated? It would send an irrevocable earthquake through the official historical record and the scholarship if it’s true. And what of Jo’s grandfather – what is his part in this story, in this diary of Virginia Woolf’s? And what really happened to Virginia – she still winds up dead.

To begin to answer some of these questions, Jo takes the diary to Sotheby’s, meeting the Oxford-educated historian and appraiser, Peter Llewellyn. Before you know it, Peter and Jo are zipping around the country from university libraries to old Woolf haunts to secret archives. A trusted expert absconds with the book and they pursue. Graydon jets into the fray. Peter and Jo draw closer and closer, personally and to the truth of Virginia Woolf’s last days.

And on it goes. It’s amazing what manuscripts and notes and bits and bobs are hidden in gardens and cottages, just begging to be dug up, if you know how to decipher the clues and where to look.

RELATED: The Secret of Pembrooke Park Review – A New Novel for Any Jane Austen Fan

I must admit that it all just gets a bit too much for this reader. Despite the interesting premise, despite the book’s readability – and it is indeed readable and was certainly not a waste of my time – and despite the characters’ likeability, the treasure hunt sort of failed for me.

A quest is also a chase, and a chase encompasses risk of some sort. Tensions need to rise. Antes need to be upped. Suspense needs to build. Our protagonists need to be risking lives and reputations and futures on this very quest.

But no, there was nothing perilous with this quest at all. Well, except for Virginia Woolf, who is already dead, so the story involving her ceases to be truly suspenseful. For the modern-day protagonists in the story, the potential loss of a hated job or the possibility of being accused of petty theft or the opportunity of a single man falling for a single woman just doesn’t wind the tension taut enough.

You end up with a shrug, a bored sigh and a whatever, unfortunately. I did so want to really enjoy this book. Sigh.

RELATED: The Madwoman Upstairs Review – A Book Every Brontë Fan Should Read

Adaptation Recommendation: With much rewriting and a little more perilous and suspenseful oomph, there definitely could be a screen adaptation. The story’s kernel and its bones, its structure, remain engaging and intriguing. It justs needs to be fleshed out and explored a bit more.

Content note: There is some minor swearing in The White Garden: A Novel of Virginia Woolf. There is also a married man making grand romantic moves towards someone who is not his wife…

Our romance-themed entertainment site is on a mission to help you find the best period dramas, romance movies, TV shows, and books. Other topics include Jane Austen, Classic Hollywood, TV Couples, Fairy Tales, Romantic Living, Romanticism, and more. We’re damsels not in distress fighting for the all-new optimistic Romantic Revolution. Join us and subscribe. For more information, see our About, Old-Fashioned Romance 101, Modern Romanticism 101, and Romantic Living 101.
Pin this article to read later! And make sure to follow us on Pinterest.
By Jessica Jørgensen on May 29th, 2017