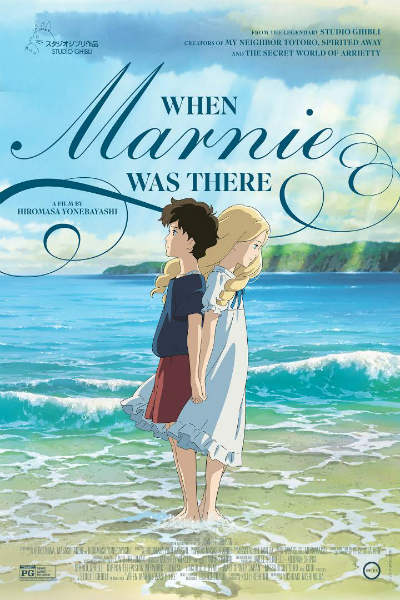 Studio Ghibli – the famed Japanese animation studio – went on a hiatus of unknown duration after the release of When Marnie Was There in 2014. So, the film stands – possibly – as the final anime production in the long and distinguished work, for which Studio Ghibli is internationally renowned and heralded. Hayao Miyazaki, Studio Ghibli’s co-founder, author, animator, producer, master storyteller, retired in 2013 – although, there are reports that he has been lured out of retirement for yet another go at yet another film. Time will tell.

As endings go, or perhaps (hopefully) as pauses go, When Marnie Was There is satisfying – it’s a good one to end/break on. It is no masterpiece. It lacks some of the magic of Studio Ghibli’s earlier animated tales. But it is a solid production, beautifully made and emotionally stirring. It is good, very good.

When Marnie Was There is based on a children’s novel (of the same name from 1967) by Joan G. Robinson. It is a coming-of-age tale of a little orphan girl, as she begins to accept herself, even learning to love herself, through her growing friendship with the mysterious Marnie.

What the Doctor Orders

12-year-old Anna Sasaki hates herself. She wants desperately to be normal, but she is just different. She is an orphan in foster care. In a land of brown eyes, she has remarkable blues. Anna knows nothing of her birth family. Despite having a loving foster mother and father, she is increasingly retreating into herself, withdrawn, sullen, anxious, depressed. She may smile politely, but inside she is seething and sad and frustrated and lost, just very, very lost.

And all these bottled up emotions are heightening her asthma attacks. After a severe attack at school, Anna’s doctor suggests that she have a change of scenery, out of the city and into the country. So, Anna is sent packing, off to the seaside, to live with relatives of her foster mother’s for the summer. It is an adventure that will change her life.

Marsh House – Anna has seen it before, of that she is certain. In this sleepy little seaside village, where she starts her summer sojourn, Anna is drawn to this abandoned and dilapidated mansion across the marsh. It beckons to her. And, at certain times and in certain lights, it is almost as if the house ceases to be an isolated ruin, but morphs into life, with inhabitants of its very own. Marnie lives there.

Marnie is a golden-haired, blue-eyed beauty, a girl who gazes longingly out of the windows of Marsh House. She and Anna become fast friends. But is Marnie even real? Is she a figment of Anna’s imagination? Is she a dream? Marnie dances in and out of Anna’s life. They go on adventures. One moment, Marsh House is full of life and parties and Marnie, the next it’s rotting and empty. Is it time travel? Is it hauntings of times past?

Whatever the mystery, Marnie and Anna have a bond, a beautiful friendship, and that relationship begins to heal Anna, allowing her to make peace with herself and who she is. And the mysterious Marnie? Yeah, Marnie’s story – whether she be real or not – is one you’ll have to see When Marnie Was There to hear more about it and find out. It’s worth the watch.

Our romance-themed entertainment site is on a mission to help you find the best period dramas, romance movies, TV shows, and books. Other topics include Jane Austen, Classic Hollywood, TV Couples, Fairy Tales, Romantic Living, Romanticism, and more. We’re damsels not in distress fighting for the all-new optimistic Romantic Revolution. Join us and subscribe. For more information, see our About, Old-Fashioned Romance 101, Modern Romanticism 101, and Romantic Living 101.
Pin this article to read later! And make sure to follow us on Pinterest.
By Jessica Jørgensen on September 13th, 2017