As each new season episode of When Calls the Heart has aired, they’ve been full of the comforting normal we’ve come to associate with the show; sweet romance, faith and family, and to keep things interesting a Hope Valley mystery has sprung up.

Some unexpected arrivals and potential disappointment all played out in ‘A Gentle Heart,’ the sixth (of ten) episode of season three.

Sabotage at the Sawmill 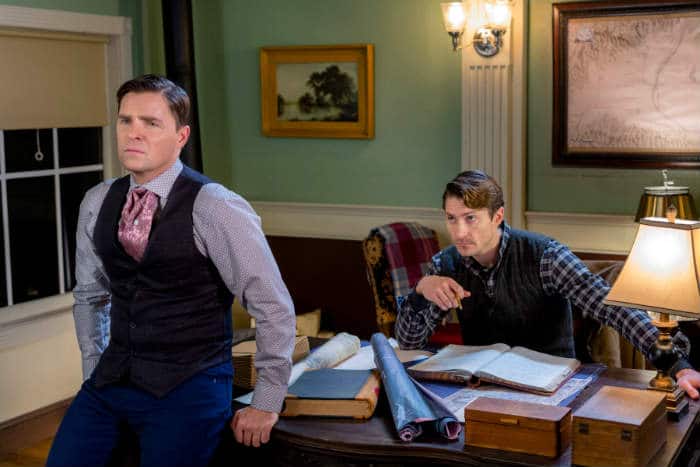 Lee’s sawmill continues to be the subject of sabotage. Unfortunately for him, even with the discreet inquiries and assistance from Bill Avery and Jack, Lee’s business is taking a tumble. Not only has he lost contracts, he’s also had to make shorter days for his employees. 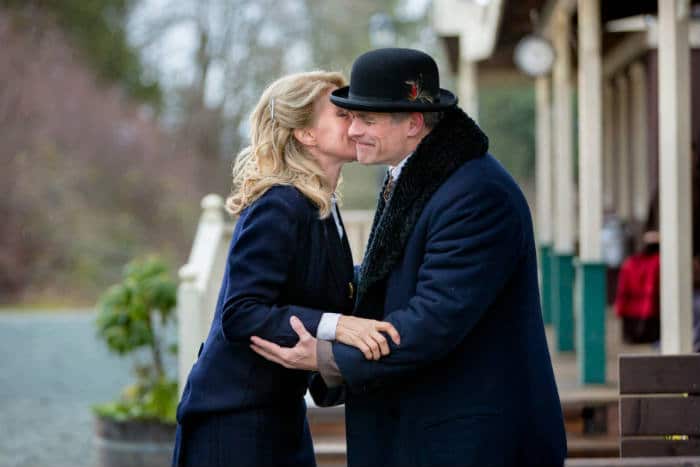 By process of elimination, Bill rules out the prime suspect, Henry Gowen but his distrust of the man has only intensified. Especially since Bill’s ex-wife returns and seems to be growing closer to Henry.

As Jack and Elizabeth work to keep their courtship intact, Elizabeth learns Faith has chosen to make a home in Hope Valley. This causes her some discomfort (and unexpected jealousy), especially since Jack didn’t tell her about Faith’s choice. Meanwhile, Jack continues with his plans to buy land and a home where he and Elizabeth might someday live as husband and wife. But until then, he busies himself reuniting a young mother (Faith’s first Hope Valley patient, Edith) with the husband who abandoned her (not knowing she was pregnant).

Armed with basic information, Jack tracks down the whereabouts of Edith’s husband, Roy. Explaining the situation to the young man, Jack finds him unreceptive to accepting the role of father. Instead, he takes the impersonal approach and offers Jack money for his family.

Hope Valley is about to become home to a major motion picture company. Naturally, this excites the eager Rosemary. Professional stage actress she is, Rosemary is most excited at the prospect the film they’re shooting as they are going to be casting townspeople to fill supporting roles. 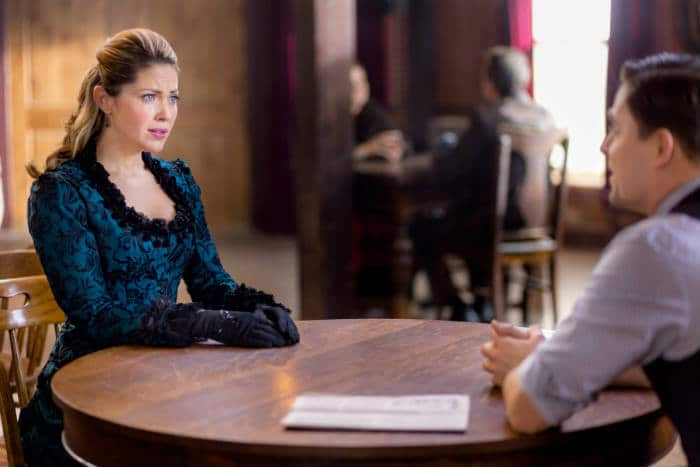 When she first meets the director, Rosemary is refused a role much to her dismay. This will never do of course. After a bit of self-pity, Rosemary cheers when inspiration strikes, and with determination, she returns to the director where she refuses to take no for an answer. As she sits across from him, in typical Rosemary style, she bullies a role out of him, of course, all in a very ladylike manner. 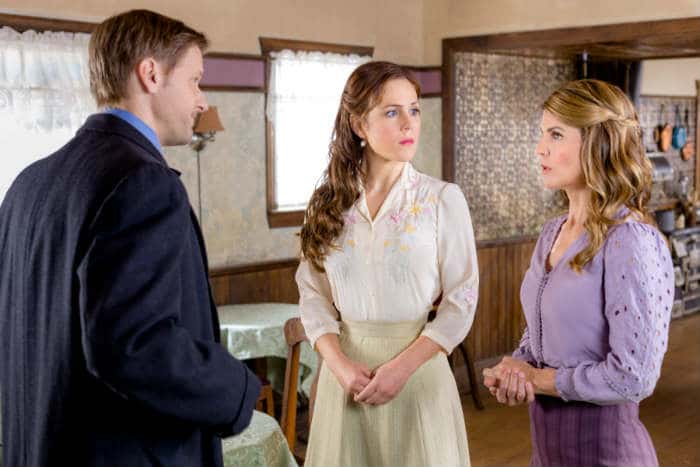 Meanwhile, at the Stanton home, Cody is excited with the news of his sister Becky’s arrival. Her letter informs Cody she’s grown stronger and is ready to return to Hope Valley as a result. A few days later, with her doctor at her side, Becky arrives at Abigail’s. Upon first sight of her, Elizabeth, Abigail and Cody are surprised to see Becky disabled and confined to a wheelchair. 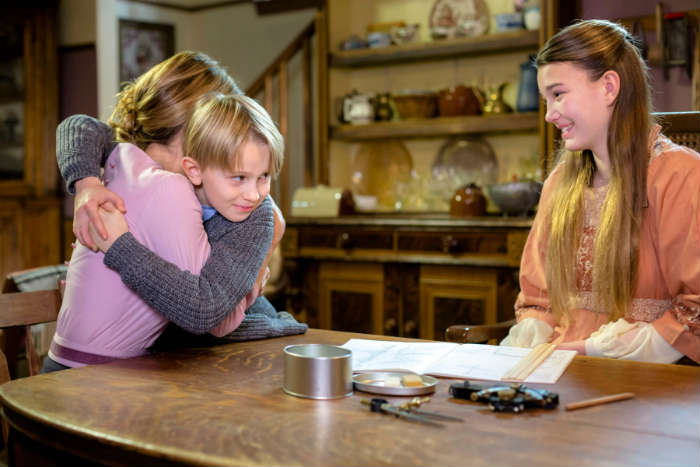 As Cody and his sister joyfully reunite, Abigail and Elizabeth express their concerns to the doctor. He tells them there is nothing wrong with Becky’s legs she is simply hesitant to use her weakened legs. With time, they all hope she’ll return to making normal use of them. Instead of pressuring her, Elizabeth allows her to fall back on the safety of her wheelchair with the help of her fellow students. At home, Abigail allows the same privileges, believing they are better off letting Becky walk when she’s ready rather than pressuring her. She does just that when she’s ready.

Just as they reach this peak, and Abigail discusses her intention to keep both children permanently (to their great happiness and agreement), a stranger walks into Abigail’s café. The woman asks after Becky and Cody. Standing there with a smile on her face, she introduces us as their aunt. The episode ends with a disappointed Abigail as she sees her happy future slip from her grasp. 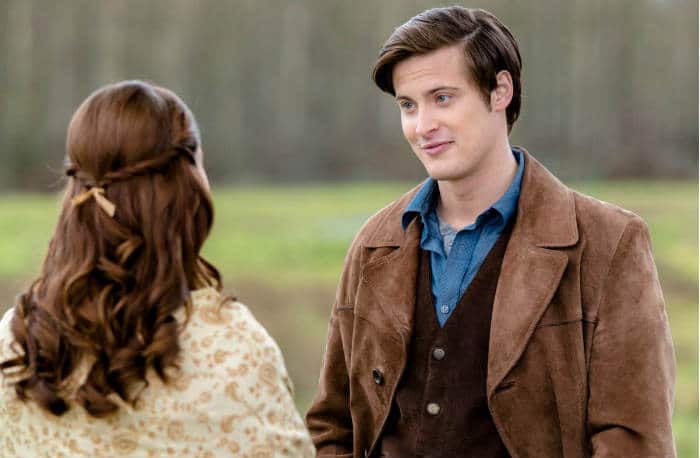 + The focus of this episode tended to be on Lee’s sawmill, Rosemary’s must-have film role, and finally Abigail becoming a foster mother, but Clara is still being “courted” by Jesse. He continues his pursuit of her, but so far, she’s remained cautiously skeptical. What do you think: do you believe Jesse is sincere and are you rooting for these two?

Have any thoughts about this latest episode? Do you think Abigail’s family will grow stronger or will this new development be the end of their short-lived happiness? Comment down below with your theories or thoughts.

Our romance-themed entertainment site is on a mission to help you find the best period dramas, romance movies, TV shows, and books. Other topics include Jane Austen, Classic Hollywood, TV Couples, Fairy Tales, Romantic Living, Romanticism, and more. We’re damsels not in distress fighting for the all-new optimistic Romantic Revolution. Join us and subscribe. For more information, see our About, Old-Fashioned Romance 101, Modern Romanticism 101, and Romantic Living 101.
Pin this article to read later! And make sure to follow us on Pinterest.
By Rissi JC on March 21st, 2016