Have you ever allowed your prejudice or bias influence your ability to enjoy something? I have. Aside from the music, I pretty much avoid anything from the seventies. I’m just not a fan of most of what originated from that decade. Which is why despite hearing nothing but positive things said of What’s Up, Doc?, I was pretty sure I wouldn’t like it. Boy, was I wrong!

What’s Up, Doc? is one of the funniest films I’ve ever seen. And I say that as a connoisseur of comedic film. It’s my favorite genre. In fact, I think I laughed even harder the second time I viewed it than the first time around. 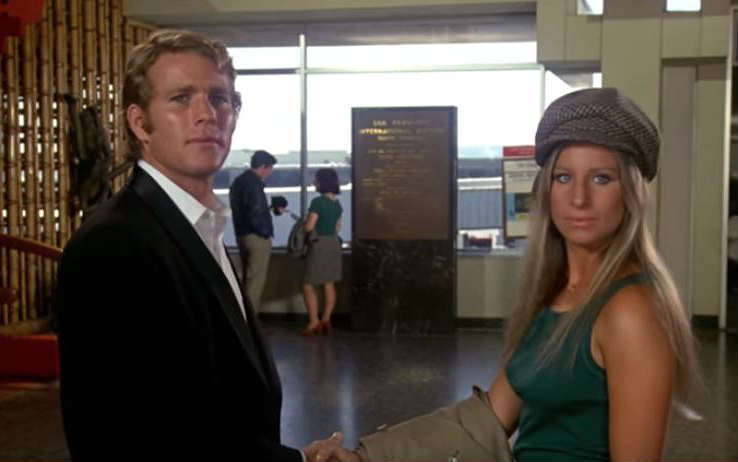 The story begins with four matching travel bags. One contains top secret stolen documents and papers. A government agent is hot on the trail, tracking them for recovery. The second belongs to the wealthy Mrs. Van Hoskins and contains her jewels. Dr. Howard Bannister is the owner of the third. It holds his beloved igneous rock collection.

Howard is in town as a finalist for an important grant which would allow him to continue his studies on the effects of rocks in creating music. Accompanying him is his uptight fiancée, Eunice Burns who manages his life like an automaton.

The fourth bag holds the personal effects of Judy Maxwell. Judy is a street-smart young woman whom disaster seems to follow at every step. She is also remarkably book smart, full of random knowledge which she spouts off to the surprise of everyone around her. None of those carrying the bags are aware that anyone else has a bag resembling their own. And that is where the fun starts.

RELATED: Bringing Up Baby – A Classic Screwball Romantic Comedy That Will Make You Laugh

The four identical bags lead to confusion. They are continuously moved from room to room as the owners keep grabbing each bag thinking it is theirs. All parties involved occupy hotel rooms on the same floor which makes things even more confusing. There’s a lot of sneaking in and out of the various rooms and machinations to retrieve the bag each thinks belong to them.

In the meantime, Judy inserts herself into Howard’s life, turning it upside down. The staid Dr. Bannister does not know what to do with the free-spirit who attaches herself to him claiming to be his fiancée. Judy introduces herself to Howard’s colleagues as Eunice Burns and then proceeds to win them over. This leaves poor Howard scrambling to keep up the façade while managing his relationship with the real Eunice.

Shenanigans and hijinks abound. Not only do the mixed up bags create hilarious situations, but so does the motivation behind the retrieval of each bag. The confusion grows as more and more people are entangled in the chaos. There is an accidental hotel fire in one of the rooms, and a chase scene with a bicycle through the streets of San Francisco. The action never stops and increases in hilarity as the movie goes on.

Ryan O’Neal is adorable as the dull academic who sees his plans upended by unexpected adventure. I rather enjoyed watching him try to resist his rather persistent and charming stalker. Meanwhile, Barbra Streisand is on point in her portrayal of the quirky, resilient Judy who just won’t go away, no matter how many times Howard asks her to.

Instead of being obnoxious, she’s rather endearing. I found Kenneth Mars particularly funny as Howard’s nemesis and fellow finalist Hugh Simon. He is hysterical as the self-absorbed foreign-born scientist who tries to hog the spotlight and flicks his hair like a vain supermodel. The rest of the cast give rather brilliant performances as well.

I love how director Peter Bogdonavich pays tribute to the classics in What’s Up, Doc?. He was inspired by the screwball comedy Bringing Up Baby. That inspiration is more than obvious in the characters of Howard and Judy. There is even an obvious reference to Casablanca.

In addition, I noticed a couple of scenes which reminded me of Buster Keaton’s silent comedy Seven Chances, as well as, It’s a Mad, Mad, Mad, Mad World. It also features the music of Cole Porter to great effect. Another unexpected surprise is the unintentional tour of San Francisco. Some of the action happens in the streets of the city, so we get a quick tourist’s glimpse of a place that has long been on my travel bucket list.

What’s Up, Doc? is proof that it ‘s worth challenging our preconceived notions and personal judgments. If I had been unwilling to do so, I would have missed out on a comedic masterpiece. If you are a fan of romantic comedies like I am, I urge you to give this film a chance. With its zany circumstances, clever dialogue, perfectly portrayed characters and homages to the classics, this is sure to become a favorite when you need a laugh.

Where to Watch: Currently available to rent or buy on Amazon, YouTube, Google Play, iTunes and Vudu

Have you seen What’s Up, Doc? What do you think of this romantic comedy? Sound off below…

Our romance-themed entertainment site is on a mission to help you find the best period dramas, romance movies, TV shows, and books. Other topics include Jane Austen, Classic Hollywood, TV Couples, Fairy Tales, Romantic Living, Romanticism, and more. We’re damsels not in distress fighting for the all-new optimistic Romantic Revolution. Join us and subscribe. For more information, see our About, Old-Fashioned Romance 101, Modern Romanticism 101, and Romantic Living 101.
Pin this article to read later! And make sure to follow us on Pinterest.
By Brittaney B. on November 29th, 2018