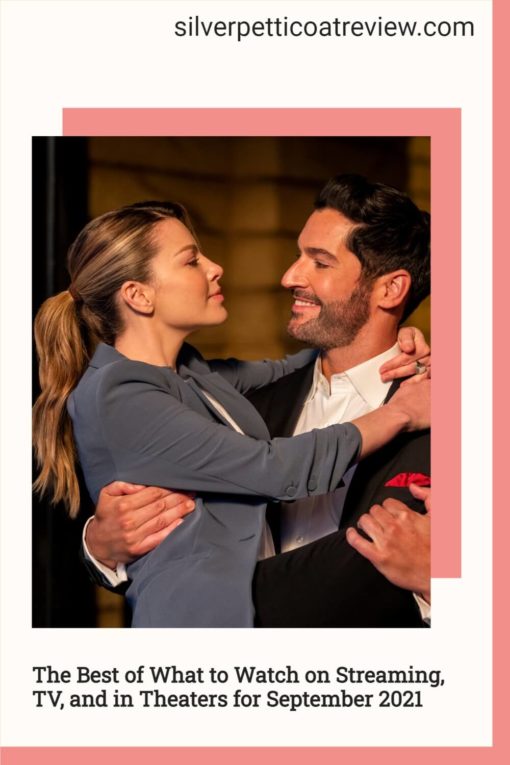 The Fall TV season is officially here – and that means there are many new TV shows and returning favorites to choose from – almost mind-bogglingly so. On top of that, numerous movies and shows premiere on streaming, with a few films playing exclusively in theaters. So, with hundreds of new and old titles, we narrowed down the list of what to watch on streaming, TV, and theaters this month – mainly focusing on romance and period drama with some mysteries, uplifting stories, and genre for some variety.

But there is something here for everyone, even if it’s not an all-inclusive list of everything available. We broke down what to watch for this watchlist by types: streaming, theaters, TV, and VOD. Enjoy!

NOTE: Release dates are subject to change. New movies and shows (or new season premieres) will have a star next to the title. Also, if a movie or show is R-rated or TV-MA, we’ll let you know.

WHAT TO WATCH ON STREAMING, TV, AND THEATERS: HIGHLIGHTS FOR SEPTEMBER 2021

Our Top Picks: If you’re looking to head out to the theater, you can’t go wrong with Shang-Chi! But if romance is more your mood, we’re super excited about I’m Your Man, a German romance film starring Dan Stevens (Downton Abbey) as a robot.

*Shang-Chi and the Legend of the Ten Rings – Adventure, Fantasy (Now Available in Nationwide Release)

Our Top Picks: If you’ve yet to see Cruella, it’s a fabulous and stylish retelling of the famous story. Saving Paradise also looks like a cute, inspirational film.

Our Top Picks: You can’t go wrong with any of these shows! Midsomer Murders is a go-to comfort British mystery, Finding Alice is a new dark comedy series (so only watch if you enjoy dark comedy!) starring Keeley Hawes (The Durrells in Corfu, Our Mutual Friend). And the Republic of Doyle is a fun, comedy PI series about a father and son. There’s lots of romance and great guest stars too!

Our Top Picks: The new Cinderella is an enjoyable movie for the whole family, while Sleepless in Seattle is the perfect comfort rom-com to watch!

Our Top Picks: See the Broadway musical Come From Away filmed on stage in NYC! It’s an uplifting musical that takes place on 9/11/01 in Newfoundland when thousands of passengers are stranded.

On the other hand, Foundation looks like an epic and entertaining sci-fi series starring Jared Harris and Lee Pace. We can’t wait.

Our Top Pick: Vera is an excellent choice if you love British mysteries/crime shows! Brenda Blethyn gives a brilliant performance as the witty detective and deserves more awards.

Our Top Picks: Check out the remake of Doogie Howser, this time about a young woman working as a doctor in Hawaii! It’s perfect for the entire family.

If romance is more your speed, watch Confessions of a Shopaholic or The Fault in Our Stars. The first is hilarious, while the second is a tragic YA romance.

Our Top Picks: If you’re looking for something new to watch, check out Clint Eastwood’s latest, Cry Macho, or the CW’s Superman & Lois if you haven’t watched the first season yet. It’s surprisingly good in an Everwood meets early Smallville kind of way.

Now, if you’re in the mood for something nostalgic and magical, all eight Harry Potter films are available. But if you want to go even further back, you can’t go wrong with the phenomenal Judy Garland romantic musical, Meet Me in St. Louis.

Our Top Picks: Hulu is the best streaming service to catch up on Fall TV premieres if you don’t have regular cable. We’re most excited about New Amsterdam and the Helen and Max romance and Law & Order: SVU. It’s possible after all these years that something might happen between Stabler and Benson.

As for new shows, La Brea looks promising as the latest drama series with a sci-fi/disaster twist a la Lost style. There is also a remake of The Wonder Years. It’s set in the 1960s and looks heartwarming and nostalgic.

Our Top Picks: The final season of Lucifer, the romantic urban fantasy series, is now available! Find out how the show ends. Will Lucifer and Chloe get their happy ending? We hope so! (We’ve made it to episode eight so far, and it’s the perfect final season sendoff.)

We also recommend checking out Hotel Del Luna, a romantic Korean drama series perfect for Halloween. It’s from the same writers as Master’s Sun, so you know it’s good.

*On the Verge, Season one – Comedy (Now Available) (TV-MA)

Our Top Pick: The Tony Awards always have outstanding Broadway performances, so we recommend watching for the entertainment factor.

But if you’re in the mood for romance, then watch Cold Mountain – it’s an epic love story with fantastic chemistry between Nicole Kidman and Jude Law. We also recommend Slumdog Millionaire – because it’s brilliant.

Our Top Pick: Lucy Worsley makes history fun and entertaining. Her new documentary is no different.

If you don’t mind the strong language, My Son also sounds promising. It’s a thriller mystery film with some romance starring James McAvoy and Claire Foy.

There’s also the new conspiracy adventure series that could be fun: Dan Brown’s The Lost Symbol.

For old romantic favorites, watch Notting Hill and Out of Africa!

Our Top Picks: Besides all the new and returning shows (Grey’s Anatomy previews have us excited), we’re most enthusiastic for the new Hallmark movie, Taking the Reins. It has a good writer, a strong cast (including Nikki Deloach and Scott Porter), and it looks cute!

*Raise a Glass to Love – Drama, Romance (Premieres on Hallmark)

What do you plan to watch on streaming, on TV, and in theaters this month? Let us know in the comments below!