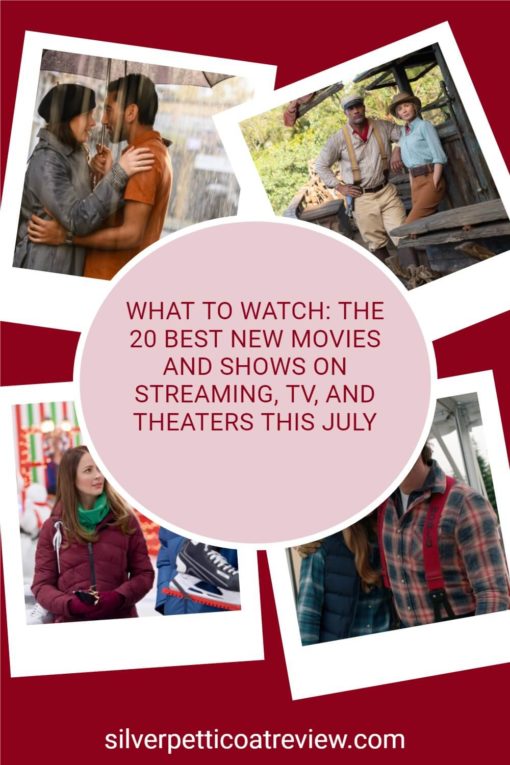 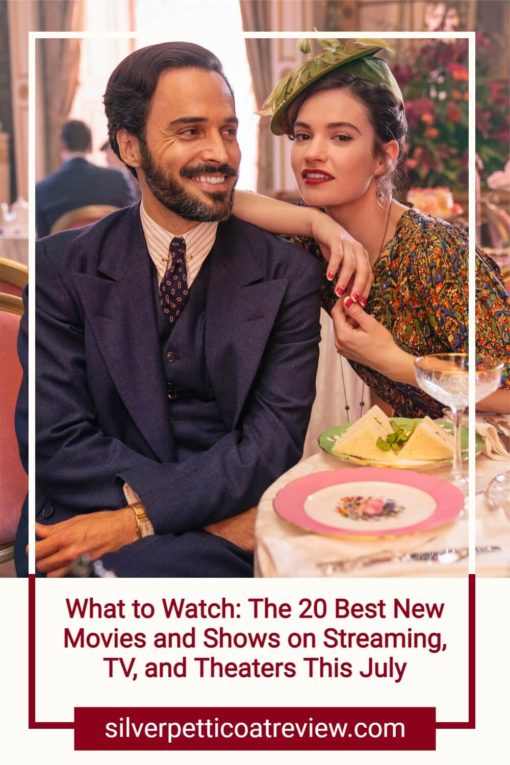 Summer is here – and with it comes many new movie releases, TV premieres, with some content going to theaters and others going to streaming. Yeah, it’s more than a little confusing knowing what to watch! So, we’re here to help with the confusion and recommend some great content coming your way.

Here is a list of what to watch this July, plus when and how for each movie and show.

WHAT TO WATCH: THE JULY 2021 WATCHLIST – BEST NEW MOVIES & SHOWS

In Marvel Studios’ action-packed spy thriller “Black Widow,” Natasha Romanoff aka Black Widow confronts the darker parts of her ledger when a dangerous conspiracy with ties to her past arises.

Pursued by a force that will stop at nothing to bring her down, Natasha must deal with her history as a spy and the broken relationships left in her wake long before she became an Avenger.

Why You Should Watch: Black Widow finally gets the chance to shine as the main character of a Marvel movie. It looks like great fun with a fantastic cast and an entertaining plot.

How to Watch: Wide release in movie theaters and Disney+ (for an extra fee).

In 1720 Madrid, a talented cook catches the eye of a widowed duke just as he returns to aristocratic society. Based on the novel by Fernando J. Munez.

Why You Should Watch:

If you’re a fan of epic romantic Spanish dramas, this period drama series looks like a grand example with soapy plot twists and swoony romance scenes. However, this one may be on the steamier side than the more wholesome Grand Hotel.

Content Note: TV-MA for sex and nudity (unclear how explicit this show will be).

#3 CRASHING THROUGH THE SNOW

Maggie and Sam are crashing Christmas. When he proposes they team up against his sister’s perfect Christmas, neither of them are prepared for the blended family challenges that lie ahead.

Why You Should Watch: If you love Hallmark Christmas movies and their sweet flavor of romance, this new TV movie starring the always likable Amy Acker looks promising.

How to Watch: Watch on the Hallmark channel.

Why You Should Watch The Outpost:

The Outpost is an underrated romantic fantasy series that gets better with each episode. If you haven’t watched it before, you can stream the previous seasons (first two seasons on IMDB TV, first half of season 3 on CW) and be ready to watch the second half of season 3 when it premieres soon – especially since it left on quite a cliffhanger. If you love shows like Legend of the Seeker, you should like this one.

Why You Should Watch Roswell, New Mexico: If you’re a fan of star-crossed romance, then you should give this show a chance. It’s not nearly as good as the original 1999 series, but it still has much to recommend it. I’m excited to see what the new showrunner will do with the series, as there is still a lot of room for improvement.

How to Watch: Watch on the CW or watch new episodes the next day on the CW streaming app.

A new generation of privileged New Yorkers are introduced to ruthless social surveillance eight years after the original blogger’s website went dark. Kristen Bell returns as the voice of the titular Gossip Girl.

Why You Should Watch: Gossip Girl is back. Now, this is a continuation/spinoff rather than a remake of the original CW series. While I have no idea what to expect from it, Kristen Bell is continuing the narration of the series, which is a good sign.

How to Watch: HBO Max

An epic fantasy adventure based on the timeless Arthurian legend, The Green Knight tells the story of Sir Gawain (Dev Patel), King Arthur’s reckless and headstrong nephew, who embarks on a daring quest to confront the eponymous Green Knight, a gigantic emerald-skinned stranger and tester of men.

Gawain contends with ghosts, giants, thieves, and schemers in what becomes a deeper journey to define his character and prove his worth in the eyes of his family and kingdom by facing the ultimate challenger. From visionary filmmaker David Lowery comes a fresh and bold spin on a classic tale from the knights of the round table.

Why You Should Watch: Dev Patel stars in what looks like a very cool reimagining of the story. The Green Knight looks to be a promising addition to Arthurian movies.

Content Note: R for nudity, sexuality, violence (unclear how explicit the movie will be).

How to Watch: In theaters – although it is only in a limited release.

Why You Should Watch: It looks like a whole lot of fun for the entire family in a Pirates of the Caribbean/The Mummy kind of way with adventure and romance.

How to Watch: Wide release in theaters. You can also watch it on Disney+ for an extra fee.

#8 THE LAST LETTER FROM YOUR LOVER

After finding a trove of love letters from 1965, a reporter sets out to solve the mystery of a secret affair—while embarking on a romance of her own.

Why You Should Watch: It’s based on the novel by Jojo Moyes and looks to be an excellent romance film Possession fans might enjoy! The all-star cast doesn’t hurt either.

Hayley and her best friend Bree go on a reality dating show to publicize her fashion line, but nothing goes as planned when love, friendship, and careers are on the line.

Why You Should Watch: Scott Michael Foster (Chasing Life) in a new Hallmark romance should be a nice treat!

How to Watch: Hallmark Channel

Before long, the shot rings out again, and Peregrine realizes she’s been looking at the murderer all night without even knowing it.

Why You Should Watch: All fans of Miss Fisher’s Murder Mysteries should watch this delightful spinoff about her niece! The season finale is sure to be a good episode.

How to Watch: Acorn TV. All episodes will be available to watch!

The Pursuit of Love follows the friendship between cousins Linda and Fanny, which will be put to the test as Fanny settles for a steady life and Linda decides to follow her heart.

Why You Should Watch: It’s based on a lovely classic novel and has a brilliant cast, including Lily James, Emily Beecham, Dominic West, Emily Mortimer, and Andrew Scott.

How to Watch: Amazon Prime Video

Reeling from a broken engagement and career meltdown, a singer takes a gig at a swanky island resort — where her ex-fiance happens to be getting married.

Why You Should Watch: It looks like the perfect escapist rom-com for the summer! We can’t wait for this one.

Why You Should Watch: This is an unusual choice we know, but we love gardens and flowers and feels it fits well into our Romantic Living section here at Silver Petticoat.

So, watch this if you love gardens and everything British and need something relaxing to enjoy. Who knows, maybe it will inspire you to go to this fabulous event in person one day.

Content Note: Likely TV-G based on past flower shows.

In this parody of 1940s musicals, backpacking couple Melissa and Josh get trapped in Schmigadoon, a magical town filled with singing and dancing townspeople, and learn they can’t leave without finding true love—which they thought they already had.

Why You Should Watch: This looks like the perfect show for musical lovers! It looks hilarious, romantic, and a lot of fun – not to mention the fantastic cast.

How to Watch: Apple TV+

Time travelers arrive from 2051 to deliver an urgent message: 30 years in the future mankind is losing a war against a deadly alien species. The only hope for survival is for soldiers and civilians to be transported to the future and join the fight.

Determined to save the world for his daughter, Dan Forester teams up with a brilliant scientist and his estranged father to rewrite the planet’s fate.

Why You Should Watch: If you’re in the mood for a Blockbuster from the comfort of your home, this alien sci-fi movie looks promising. And Chris Pratt is usually an entertaining lead.

How to Watch: Prime Video

Uptight young Deputy Marshal Scott Turner’s life is turned upside down when he inherits Hooch, a slobbery mess of a dog. His new pet is aggravating, but he turns out to be quite good at helping Scott catch criminals, find love, and maybe even solve the mystery of Scott’s Dad’s last case.

Why You Should Watch: If you liked the original movie with Tom Hanks, then this could be a fun continuation for the entire family. Plus, the Disney Plus original TV shows have been surprisingly good so far.

Parts of a body are found in a scrapyard. Meanwhile, after making the decision to retire from the police force, Cassie faces a dilemma when she learns she isn’t entitled to her full pension payment unless she completes her 30 years of service.

Why You Should Watch: If you’re as big a fan of British crime shows as we are, then you’ll probably love Unforgotten. Season four premieres on PBS Mystery, and it has already received good reviews.

How to Watch: PBS, PBS Passport

Why You Should Watch: Virgin River is an excellent romantic drama series with memorable characters, fantastic love stories, and small-town charm. Season 2 left on a massive cliffhanger, so season 3 can’t get here soon enough! If you haven’t watched the first two seasons yet, you can quickly catch up on Netflix. It’s definitely worth it.

#19 WEDDING OF THE CENTURY

“A new feature-length documentary from Touchdown Films marks the 40th anniversary of Charles and Diana’s wedding, featuring beautifully restored high-definition film and exclusive interviews with those who worked behind the scenes.”

Why You Should Watch: If you enjoy documentaries about the British royal family, this sounds like a lovely one.

A hotel concierge and a psychiatrist with traumatic childhoods form a heartfelt bond when they become entangled in a perplexing local murder case.

Why You Should Watch: This latest romantic Kdrama looks cute, so if you’re a fan of the k-drama-style, and enjoy a bit of murder mystery and romance, give this one a try!

· To find out the times for the many romances and period dramas on TCM, check out the full schedule HERE.

What new movies and shows do you plan to watch this July? Let me know in the comments!