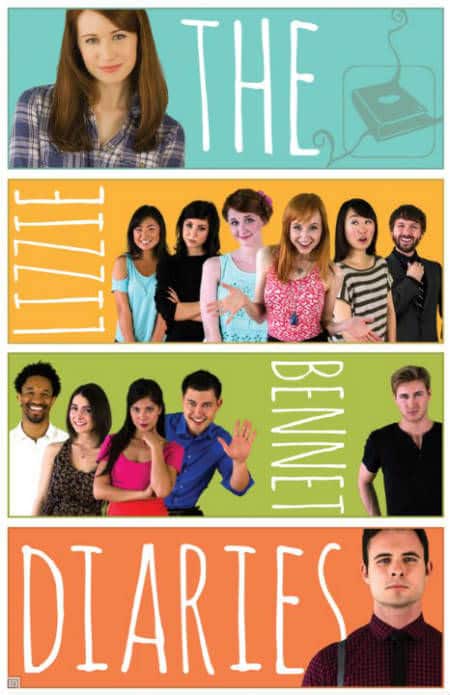 I have never particularly been one for modern adaptations of beloved classics but I must confess that I really enjoyed The Lizzie Bennet Diaries. Popular classics have been a common subject over the years.  A few have been adapted repeatedly to the point that they have been tired and over familiar. However, in recent years, there have been a few modern adaptations which have taken advantage of the platforms available on the Internet. Namely, through web series that attempt to take a fresh perspective on these beloved works.

It began with a production created by one of the Vlogbrothers, a popular pair of YouTubers.  The infamous Lizzie Bennet Diaries, created in 2012. This web series has developed a large following and fan base. Since then, many others have followed suit. It seems to have sparked a trend. There are several new series, some of which are still adding new episodes. Approaching this first one, I was skeptical. While being familiar with the medium, I was uncertain how they might adapt what is traditionally filmed in full period dress. However, much to my surprise the heroine and the writing won me over. The transfer to a modern, minimalist setting was seamless. Changes were made only when it was necessary. The acting and writing is not at all amateurish. This adaptation and many like it manage to keep the spirit of the original novels intact yet transform them into something new.

The episodes are usually under five minutes in order to cater to modern attention spans. They are released bi-weekly. In total there are about 100 episodes per series. The medium is not restricted to Vlogging though. Some use found footage in a way that has been popular with horror fans for years. Once used to this unusual method of storytelling, it can become very addictive. Much emphasis is placed on the introduction of new characters especially if the fans have been anticipating the arrival for some time.

They are not perfect though, some require a love of the original novel to excite interest. For example, two yet to grab me are Frankenstein MD and Gables Fables, though this may be a matter of personal taste as they are both well-made. Some can have unexpected month-long hiatuses and promising lesser known productions such as The Jo March Vlog, can be left unfinished with no reason given.

What better way to speak to the recent generations born into or having grown up in the digital age? This manner of storytelling reaches younger audiences more effectively than teaching it in schools. Given the popularity of Vlogging, YouTubers and the realness the medium gives its characters, it is a wise choice to reach modern audiences. The characters are talking directly to the viewer which creates a certain realism made interactive by the platform; the limitations to the manner of filming forces makers to be creative. Characters have Twitter, Tumblr and Facebook profiles through which fans are invited to play along which many do, asking questions that are answered in the series Q&A videos. They also provide extra information about happenings between videos to enrich the entire experience.

The overall response to such shows has been incredibly positive, demonstrating the need for such adaptations in this day and age.

In the comments section seasoned readers of the books respond well to the series’ alongside new readers convinced by the web series to pick them up. The overall response to such shows has been incredibly positive, demonstrating the need for such adaptations in this day and age. This is a medium not just suited  to adaptations of popular classics but a way for original pieces like H+ (Science Fiction), Submissions Only (Comedy) and QuarterLife (Drama) to reach audiences in new ways.  It permits talented indie actors, writers and filmmakers to have the audience that they deserve. I look forward to see what they adapt next.

The Lizzie Bennet Diaries (2012) is a modern semi-interactive adaptation of Pride and Prejudice by Jane Austen. The story is told through vlogs by Lizzie Bennet who is keeping a video log for the purposes of a postgraduate project much like a diary. Though other characters do appear later on.

The Autobiography of Jane Eyre  (2013) is a Canadian web series inspired, as the title character herself admits, by The Lizzie Bennet Diaries. This series takes more the raw tone of a personal vlog from the perspective of a modern Jane, a fully qualified nurse who comes to work for Mr. Rochester, a reluctant CEO of an international company. She arrives to work as a Nanny to Young Adele Rochester, his daughter. This is already a personal favourite, not just due to a bias towards the original source material but also due to the warmth and great acting of its characters.

Emma Approved, (2013) by the makers of The Lizzie Bennet Diaries, is based on another Jane Austen novel, Emma.  Again it has been modernized. Emma runs a matchmaking agency with her business partner and best friend Alex Knightly. More polished than and just as self-aware as the previous offering, it is a charming addition to YouTube.

The New Adventures of Peter and Wendy (2014) is a modern take on Peter Pan. It can at first be a bit off-putting to watch adults acting much like the children they were based on but I can honestly say it grew on me. Tink, who may or may not be real, is the camera. This web series is more pantomime-like than the others. The familiar characters live in the fictional town of Neverland and work at a newspaper run by the Darling family.

Classic Alice (2014) is not quite like the other ones on this list. It follows Alice, a student at an Ivy League University who embarks on a journey through literature to improve her own writing. She makes a decision to emulate the lives of iconic characters and document it through a video blog. But things do not turn out the way she intended and she finds herself growing in unexpected ways. This is my current favourite.

Our romance-themed entertainment site is on a mission to help you find the best period dramas, romance movies, TV shows, and books. Other topics include Jane Austen, Classic Hollywood, TV Couples, Fairy Tales, Romantic Living, Romanticism, and more. We’re damsels not in distress fighting for the all-new optimistic Romantic Revolution. Join us and subscribe. For more information, see our About, Old-Fashioned Romance 101, Modern Romanticism 101, and Romantic Living 101.
Pin this article to read later! And make sure to follow us on Pinterest.
By Elinor Cackett on December 2nd, 2014