Some movies are produced purely for the sake of entertainment, and if you’re anything like me, this is why you love them. We Love You, Sally Carmichael is one such movie.

In the early moments of the story, we meet Simon (Christopher Gorham). Simon is just your average guy. An author with a camera phobia, he’s a guy whose book, sadly, tanked on the best-seller (and non-bestseller) lists. Sally Carmichael, on the other hand, is a worldwide sensation thanks to her trilogy of YA novels about a merman and his lady love. The complicated part? Simon is Sally and Sally is Simon.

Things get thorny when Simon aka Sally is pressured by the publisher to smooth over the book’s movie deal. Its leading star is a temperamental actor (Sebastian Roché) who, despite being ten-plus years older than the character in the book, is in high demand. For some reason (which is never fully explained), Simon is needed to do some hand-holding before the final negotiations. Furthermore, Simon meets Tess (Elizabeth Tulloch), a small bookshop owner who moonlights as an online newspaper editor. She also happens to be a reader who has actually read Simon’s book and liked it.

The trouble with Indie films is, so often they fly under the radar and they’re too often overlooked. Such is the case with this little film. While there are a few bumps along the way, there is much to enjoy about We Love You, Sally Carmichael. The best part? The film turns out to be a lovely little story on top of the fact that it has some truly endearing and great moments. 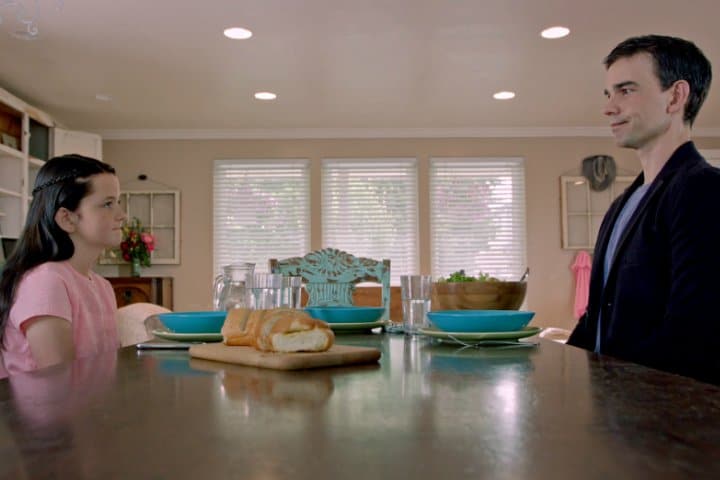 Since the premiere episode of the (now canceled) USA Network show Covert Affairs, I’ve been a fan of Gorham. Not just the actor, but also the character he played, Auggie Anderson. This is why discovering that he stars in a new romantic comedy became a prime motivator in my finally watching this film. Pulling off double duty, Gorham also directs this feature film.

RELATED | THE ACCIDENTAL HUSBAND (2008): A RIDICULOUSLY ROARING ROMP OF A ROM-COM

Those of us who remember Auggie will see Christopher play a very different character in this story. That said, he still charms the viewer. The sweet story that blooms between his Simon and Tess is endearing (though sadly the romance doesn’t get as much screentime as I’d have liked) as are the all-too-few scenes he shares with Tess’ daughter, Andie.

Despite a few exaggerated slapstick bubbles, I thoroughly enjoyed this recent release. On the positive side, I think that part of these “sillier” scenes and plots is intentional. It packs more charm in the film. The script welcomes some sass, and the laughs keep up the pace, and of course, the lead stars (Gorham and Tulloch) are fabulous. Moviegoers who crave a lighthearted story with elements of “quirky” humor will discover a gem in We Love You, Sally Carmichael. It’s worth seeing for this reason alone. Because, sometimes, a happy-go-lucky story that makes the viewer laugh is all we need.

Where to Watch: You can rent ‘Sally’ on Amazon Video or purchase it on DVD/Blu-ray. It’s also available on iTunes.

Content Note: Rated PG, there’s nothing offensive in this film.

Our romance-themed entertainment site is on a mission to help you find the best period dramas, romance movies, TV shows, and books. Other topics include Jane Austen, Classic Hollywood, TV Couples, Fairy Tales, Romantic Living, Romanticism, and more. We’re damsels not in distress fighting for the all-new optimistic Romantic Revolution. Join us and subscribe. For more information, see our About, Old-Fashioned Romance 101, Modern Romanticism 101, and Romantic Living 101.
By Rissi JC on January 8th, 2018