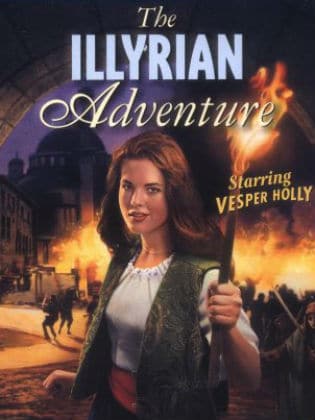 There are some characters in fiction that you didn’t know you wanted to read about until you finally did read about them. For me, Vesper Holly, from the Vesper Holly Adventures by Lloyd Alexander, is one such character.

Did you ever find yourself wondering what would have happened if Sherlock Holmes and Indiana Jones had adopted and raised a daughter together, with joint custody? What, just me? Okay, well, imagine with me what that little girl would be like. Got her? Now, you have a fairly good mental picture of our intrepid heroine, Miss Vesper Holly.

Vesper Holly is the heroine of the series, which is made up of five books and begins with The Illyrian Adventure, which is set in 1872. Although Vesper is our hero, the story of The Illyrian Adventure is told through the eyes of Brinnie (or Uncle Brinton), one of Vesper’s guardians. After her father’s death, Brinnie and his wife Mary become Vesper’s guardians and are quickly made aware of her forceful personality and bright mind.

Vesper’s father was working on a project in Illyria, a tiny kingdom on the Adriatic that has been involved in a series of internal conflicts since the twelfth century. In the 12th Century, Illyria was invaded by the Zentans (and their king Ahmad), and the resistance of Illyrians (led by King Vartan), ultimately failed.

Despite this, the conflict has not died, kept alive by leaders who take the name Vartan. Plus, there is a rumor of a treasure beyond price somewhere in Illyria. According to the epic Illyriad, this was supposed to be a symbol of peace between the two warring peoples, but it vanished before peace was in place.

Wanting to finish some of the work her father began, Vesper goes to Illyria with Brinnie (really, she drags Brinnie to Illyria with her). As she begins to piece together the truth, they find themselves involved in a civil war. Does the treasure exist, and can Vesper find it? Who, if anyone, in Illyria can be trusted? Why is Nilo, who is not a very good dragoman, determined to travel with them? What is a dragoman, anyway?

The Illyrian Adventure is a solid adventure story. The characters interact in believable ways (again, just imagine Sherlock Holmes or Indiana Jones in these situations), the plot moves along at a reasonable pace, and the stakes seem believable. I found myself caring about these characters and hoping for a peaceful solution, and that is, I think, how a good action/adventure story should be (with some humor sprinkled throughout).

Additionally, the story takes the reader to a new location that is full of possibility for the imagination. Alexander was, in my opinion, very gifted in his writing (particularly in creating believable characters and settings), and he leaves just enough of Illyria to the imagination that the reader is able to fill in the blanks. The map provides more of a basic idea, and then we, as the reader, can fill in the gaps. Personally, I liked this because I was able create my own idea of what Illyria looks like.

The use of Brinnie as a narrator reminds me of how Sir Arthur Conan Doyle used Watson to narrate for Sherlock Holmes. Basically, these are ordinary (though smart) men who are working with people who have logic and deduction skills far over their heads. They make the audience relate a bit more to the story, and I love that.

It’s a short book and one that is a very quick read. More so than The Prydain Chronicles, The Illyrian Adventure seems to be written to be read quickly. Plus, the action is suspenseful, which makes The Illyrian Adventure a hard book to put down. If you didn’t get a chance to read The Illyrian Adventure in the ’80’s or ’90’s or are just looking for a fun and quick read, I’d recommend giving it a look. Not only is this a book about a strong and intelligent young woman who goes on a fabulous adventure, but Lloyd Alexander’s gift for prose is clearly visible; the man can tell a story.

This is the time for adaptations of books with strong female characters, and the story itself is enough of an action/adventure that I think it would be a big hit. The landscape of Illyria is similar to places in the Middle East and in Greece, so there’s a lot of potential for gorgeous sets and a rich, fictional culture based on several fascinating real ones.

Casting-wise, I think Jane Levy would be a wonderful Vesper. Brinnie, to me, should be someone like Michael Gambon, older, but able to keep up with the 16-year-old Vesper. I’m thinking Naveen Andrews as Osman (but that might just be because he’s one of my favorite actors; there might be someone better for the part. Thoughts?). Finally, Joe Dempsey fits my basic idea of Nilo, but I’m not 100% convinced; he might need to be a little older.

Have you read The Illyrian Adventure? What did you think? Who would you cast? Let me know in the comments!

“You had me at hello

Our romance-themed entertainment site is on a mission to help you find the best period dramas, romance movies, TV shows, and books. Other topics include Jane Austen, Classic Hollywood, TV Couples, Fairy Tales, Romantic Living, Romanticism, and more. We’re damsels not in distress fighting for the all-new optimistic Romantic Revolution. Join us and subscribe. For more information, see our About, Old-Fashioned Romance 101, Modern Romanticism 101, and Romantic Living 101.
Pin this article to read later! And make sure to follow us on Pinterest.
By Bailey Cavender on May 27th, 2016