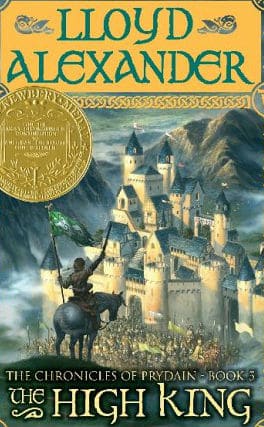 When you have a series of books that follow a young lad, determined to make his mark on the world and defend his land from evil, you have an epic coming-of-age story that stretches out over five books. The final book in the series has to wrap up the story and end the journey of our hero in a satisfactory, if bittersweet way.  The High King, the Newbery Award-winning final book in Lloyd Alexander’s The Prydain Chronicles, manages to do that.

The Prydain Chronicles by Lloyd Alexander is made up of five books that were published between 1964 and 1968. There is also a collection of short stories (The Foundling and Other Tales) that was published in 1973. The books in The Prydain Chronicles are, in order: The Book of Three, The Black Cauldron, The Castle of Llyr. Taran Wanderer, and The High King.

RELATED: THE BOOK OF THREE YA BOOK REVIEW

The High King takes place immediately after the events of Taran Wanderer, with Taran and Gurgi arriving at Caer Dallben and reuniting with the Princess Eilonwy and their other friends. Sadly, there is evil afoot, as the dark lord Arawn has upped the ante and stolen from Prince Gwydion the sword Dyrnwyn (which he has been carrying since Eilonwy found it in The Book of Three). Without giving too much away, it’s a magic sword that can destroy Arawn and his minions, so he doesn’t really want his enemies to have it.

When our heroes set off to reclaim the sword, they learn that the stakes are much higher than they had thought. They are fighting for the future of Prydain, and it’s a battle they cannot afford to lose. Taran journeys to the Free Commots, where he worked and learned in Taran Wanderer, to raise an army, and with the help from some old friends (and an old enemy), the battle begins. With old enemies returning and former friends turning to foes, the stakes have never been higher, and that’s saying something.

In The High King, we get our first complete map of Prydain. Alexander has been giving us the map of this world in chunks, depending on where the action is, but this time, we can see the whole land. I think this is because Taran is older and the story is a lot bigger now than it has been. We travel to the capital, to Annuvin, to the Free Commots, and see the entire world.

This book also is wonderful because not only do we get a map, it gives us a chance to see Taran as an adult. We remember him from The Book of Three as a scrawny and whiny little kid who wants to fight, and here we see him as a reluctant leader of a war band that will follow him wherever he goes. All of the characters have grown and changed, and we get to watch them (and cheer them on).

Romance-wise, I think the romance between Taran and Eilonwy is lovely. It’s not the main focus (they are at war), but I appreciate the fact that they’re both focused on saving the world. At the same time, they’re always in each other’s thoughts and even though they fight a lot, they just work. I love it.

Again, the language is lyrical and descriptive. I have always loved the way Lloyd Alexander could weave a yarn, and The High King is no exception. The High King also is a satisfying conclusion to the series in that it ties the whole story back to the beginning. Taran has always wondered who he is, and in this book, he finds out. The Book of Three itself and Dallben’s powers also come back to the story in a big way, and the enchantress Archen still has a role to play, as does Eilonwy’s bauble.

It’s a book that also manages to tie back in all the characters that we thought might be unimportant in the last four books, and makes them an important part of the story. I hope that when they adapt the series, they read all the way through before cutting characters!

The High King wrestles with lots of questions. These include, what is fate? Can evil people change? Seriously, what makes a good leader? Will true love and kindness conquer all? It also looks at the conflict between doing what is right and what is easy, and the stakes in this story are high. Characters that we love die (I cried), but it makes the story seem more real.

The whole series is like that; the characters have to make real sacrifices for the good of the world, and no one gets away without loss. It’s the epic story of a conflict between a kingdom and the evil lord who wants to rule it again, basically, the forces of good and evil, while also being a coming-of-age story about a young boy who takes care of an oracular pig. The two stories are woven together, creating a rich tapestry of characters, settings, and words.

The High King is both a very satisfying ending to Taran’s story and a fun book to read. Previously mentioned characters have their stories wrapped up, there is great symmetry between it and the first book, and the ending, while bittersweet, is perfect (I mean, no book is actually perfect, but I think this ending is ideal). If you haven’t read The Prydain Chronicles, I highly recommend them!

Again, as I’ve said for every other review of the other books in this series: I really love the Disney animated film The Black Cauldron, but it’s not the film adaptation that these books deserve. Whoever the team is for the live-action remake over at Disney, please give me a call; I have a few ideas for you. Anyway, I still think a series of movies would work well, and making each book a film would allow for the budget needed for all the special effects necessary to tell the story.

We also have the people of the Free Commots, and many are back from Taran Wanderer! We have with Henry Cavill as the Smith, Emma Thompson as the Weaver, and Annlaw as played by Nathan Fillion, with room for many others. There are lots of little parts that are important to this story, Glew, Math, Gwystal, Aeddan, Talisman… The moral of The High King is that all of the side characters come back to play a role in the conclusion, so cast them all!

Who would you cast? Have you read The High King? What did you think?

Our romance-themed entertainment site is on a mission to help you find the best period dramas, romance movies, TV shows, and books. Other topics include Jane Austen, Classic Hollywood, TV Couples, Fairy Tales, Romantic Living, Romanticism, and more. We’re damsels not in distress fighting for the all-new optimistic Romantic Revolution. Join us and subscribe. For more information, see our About, Old-Fashioned Romance 101, Modern Romanticism 101, and Romantic Living 101.
Pin this article to read later! And make sure to follow us on Pinterest.
By Bailey Cavender on May 16th, 2016